“No one ever lived more from day to day than I, or was more dependent upon chance. It is inescapable chain of events that has brought me to this point, rather than I who have caused things to happen.”

– As stated by Isabelle Eberhardt. Born on 17th February 1877, Isabelle Eberhardt was a Swiss-Russian writer and explorer. The illegitimate daughter of an aristocrat and a Russian anarchist, she left for North Africa to pursue a life of adventure. There, she embraced Islam by joining a mystic sect and became engaged in Algerian politics. She almost survived an assassination attempt, only to finally die in a flash flood. Although she left a number of journals and personal notes behind, the vast majority of her private life remains shrouded in mystery. 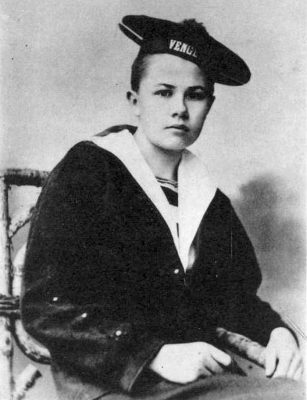 Isabelle Eberhardt was the fifth child of her mother, the widow of a Russian General. She was an illegitimate daughter born out of wedlock between Nathalie Eberhardt de Moerder and the Russian anarchist, Alexander Trophimowsky. Tutor to the Moerder children, he played a paternal role in the lives of young Isabelle and her brother Augustin.

The children were brought up in a villa on the periphery of Geneva, Switzerland. The family lived a reclusive life. Being an anarchist, Alexander Trophimowsky raised the children by imparting them with anarchist values. He taught them myriad languages as well. However, the children were rarely allowed to loiter off the property grounds.

Isabelle Eberhardt was raised more like a boy than a typical girl of the era. From a very young age, she was encouraged to dress in male attire, which complemented her characteristic male persona. Many visitors often mistook Isabelle to be a boy when they saw her dressed up in her usual garb. This trait of Isabelle’s went beyond superficial quirks in her clothing, and she even indulged in stereotypically boyish activities such as chopping wood.

From an early age, Isabelle had a great fascination for North Africa. She and her brother had read many Oriental literary works written by Pierre Loti and were eager to visit the Middle East as well. She had even studied the Quran with her father.

Life and travels in the Maghreb

When her mother’s health started deteriorating, she and her mother shifted to Algeria. She travelled under the pseudonym Mahmoud Saadi, an Arabic male student. Her mother soon converted to Islam. Being under a male disguise, gave Eberhardt the privilege to visit places that were otherwise forbidden to women. Going about the town and travelling alone helped her pick up Arabic really fast. Isabelle’s adventures in the Maghreb (north-western Africa) as Mahmoud formed the content of her writing.

Life back home in Geneva was not very pleasant for Isabelle. Soon after her return, her half-brother committed suicide. Following this tragedy, she completely devoted herself to taking care of her terminally ill father. After the death of her father from cancer, she decided to return to Tunisia with very little money left.

The eclectic lifestyle of Isabelle Eberhardt 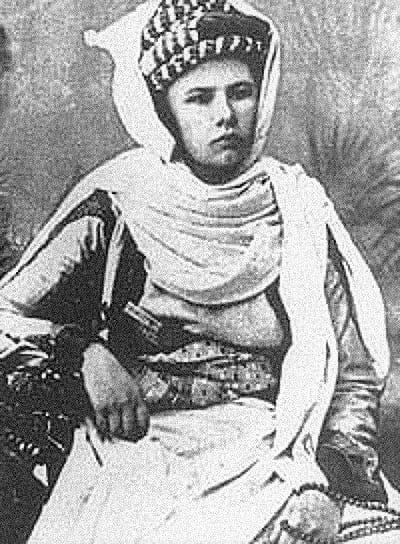 Eberhardt was a daring European woman who travelled to Africa disguised as an Arab man, privy to a world and lifestyle inaccessible to most women. Along on her travels, Isabelle brought with her several books, including those of Dostoevsky and Pierre Loti. She read the former’s works over and over again as he was her favourite. At the same time, she declared Pierre Loti to be her role model. She was also greatly influenced by the Russian feminist, Lydia Pachkov. Unable to carry her vast collection of books, Eberhardt tore out her favourite pages to bring along with her to Algeria. She was a polyglot, and by the age of twenty, she could speak Latin, Russian, German, French and Arabic.

Isabelle Eberhardt was raised to be an independent and critical thinker. She defied the typical European conventions and norms to follow her own path. She travelled throughout Morocco and Algeria, living like a nomad. She states that the only way to experience “real freedom” is by being outside one’s comfort zone. She used to frequent coffee houses. Interestingly, she had lost most of her teeth because instead of carrying a toothbrush, she used to carry a gun. The rest of her teeth were black from smoking too much kif. She became extremely thin because of her addiction to narcotics and incessant drinking of alcohol. She barely ate food. All these eccentric habits of hers were met with strong disapproval and also ended up affecting her skills and career as a writer.

Isabelle Eberhardt wrote journals for newspapers and articles for magazines. Between 1899-1901, she attempted to launch her career as a writer. She published her first short story, titled Infernalia, in 1895, under the pen name Nicolas Podolinsky. Eberhardt conveyed her resentment towards established gender roles through her fictive protagonists.

Isabelle Eberhardt was an extremely liberated individual, and actively challenged the established gender roles of her era. With her extremely unique dress style, she displayed the notion that individuals should not be reduced to the binaries of gender. Her provocative choice of fashion compelled others to re-examine and question the set gender dynamics.

Eberhardt’s initiation to spirituality; her married life and final days

Isabelle Eberhardt had many affairs, but she eventually settled down with Slimane Ehnni. He was a Muslim of the Qadriya Sufi order, through whom she herself joined the Order as well. She was drawn into spirituality. Her affiliation with the Qadriya Sufi order was remarkable since she was the first European woman to be allowed into their fold. She was permitted to participate in festivities such as Fantasia. Isabelle was almost assassinated by a member of a rival Islamic order in 1901 when the attacker tried to hit her with a sabre. She was saved at the nick of time by two Qadriya members.

Her relationship with her husband, however, started to deteriorate, and she moved to Ain Sefra. On 21st October 1904, Isabelle Eberhardt died in a flash flood in Ain Sefra. After her body had been recovered, Ain Sefra was searched for her manuscripts. Eberhardt’s self – appointed literary executor, Barrucand published her works posthumously.

Isabelle Eberhardt’s life was one of hardship, poverty and a great adventure. With no place to truly call her own and no confidante, Eberhardt looked to Islam as her only anchor. Without a home base or any worldly ties, she was a nomad on a constant lookout to quench her thirst for adventure. Eberhardt will forever be remembered as a feminist-icon ahead of her time, which crossed borders, both geographic and social, that others could only dream of.

Enjoyed this article? Also, check out “Zaha Hadid: The Prominently Leading Woman Architect Who Ruled the Roost in a Man’s World“.