The Lone Empress— The Untold Story of Jayalalithaa, Iron Lady of Indian Politics by Vaasanthi 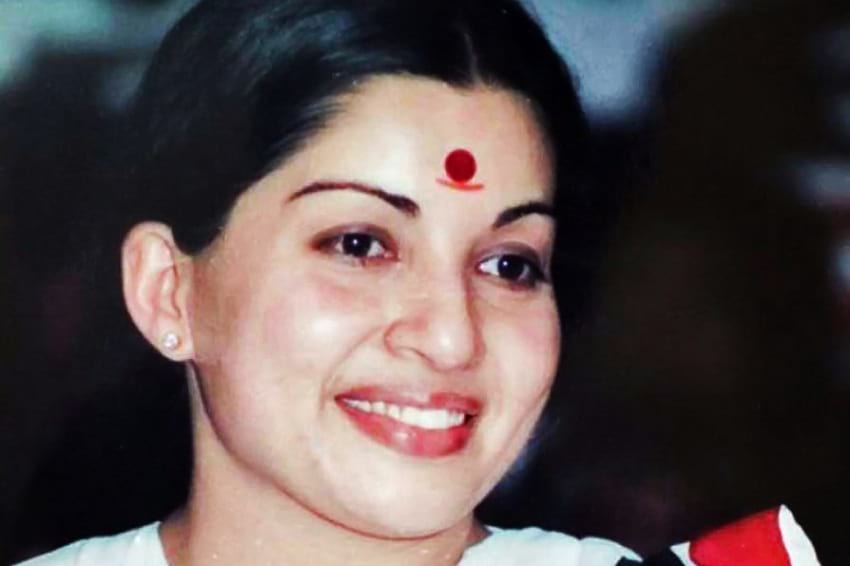 India as a country is known for its reverence and cult following of public figures. Jayalalithaa Jayaraman popularly known as Jayalalithaa is one such flamboyant figure. An actor turned politician, she had an appeal and charm that captivated the hearts and minds of millions in the southern state of Tamil Nadu. Having served as a chief minister of the state six times in a period of fourteen years, Jayalalithaa was fondly referred to as Amma. She enjoyed a monopoly of power in state politics like no one else did and her life story is as fascinating as her personality. In the book The Lone Empress: A Portrait of Jayalalithaa, writer and journalist Vaasanthi looks into her life and tries to document the leader’s struggles on her journey up the ladder of success and fame.

“The story of Jayalalithaa, a former actress—Tamil cinema’s popular glamorous heroine of the early 1970s–turned tough politician—winning the hearts of millions of people, is one of the most extraordinary stories of Indian politics.”

The book begins with the leader’s tumultuous childhood; born in an affluent family in 1948, Jayalalithaa would not see the affluence for too long. Financial constraints over time and the early demise of her father landed the two-year-old Ammu, as she was called, with her mother and brother, at her maternal grandparents’ doorstep in Bangalore. The time she spent with her grandparents had a long lasting impact on Jayalalithaa’s life, writes the author. They continued to live in Bangalore until search for a better life led Veda, the leader’s mother, to Madras (now Chennai).

Her mother, Veda, born in a Brahmin family, was married at the young age of eleven, writes Vaasanthi. Being left alone to fend for herself and her kids, Veda accepted a lucrative offer in the film industry of Madras and became the star Sandhya. This, perhaps, paved a path Jayalalithaa would later embark on.

These chapters give us a personal glimpse into the charismatic leader’s life. From her life as a toddler to her academic brilliance as a school girl, and as daughter of a famed actor, we read through the revered politician’s life stages. Her mother’s fame left a void in her, as all the glory and success came at the cost of family time.

“Waiting for mother became a habit. Along with it grew disappointment and resentment. She hated the sight of film producers and actors who came to the house at odd hours.”

The author has taken the leader’s memoirs as a source to draw an intimate portrait. These memoirs give a peek into Jayalalithaa’s life, from waiting around for her mother to naively helping her senior “friend” from school. In her memoirs, Jayalalithaa writes regarding the latter incident, I realized what the word “betrayal” really meant. This not only gives a personal touch to the book, but also helps us understand the girl she was before becoming a greatly acclaimed actor and highly revered politician.

Having grown up under a film star, Jayalalithaa surprisingly had no inclination towards the film industry. The politician’s friend Srimathi, commenting on her academic choices and ambitions, says she had her eye on medicine or IAS. But, unfortunately, her desire for higher education was never understood. This, remarks Srimathi, was a waste of Jayalalithaa’s talent and intelligence.

Her destiny had different plans for her, and before she could join college, she was drawn into the vortex of film life. Although, she had received a scholarship for her brilliant performance in matriculation exams, she could not manage and balance studies and acting.

“At that point of time, she was extremely busy. She was acting in her first picture with MGR—the man who would irrevocably alter the course of her life, for better or for worse.”

MGR—the megastar and much-loved leader of his days, who would later become a chief minister of the state—mentored Jayalalithaa’s entry into politics. It was during his tenure as a chief minister that Jayalalithaa debuted as a politician in an AIADMK’s party conference in 1982. People gathered expecting to see a star, but were blown away by her fiery and eloquent articulation.  MGR leveraged her entry into politics to win over the women voter base. 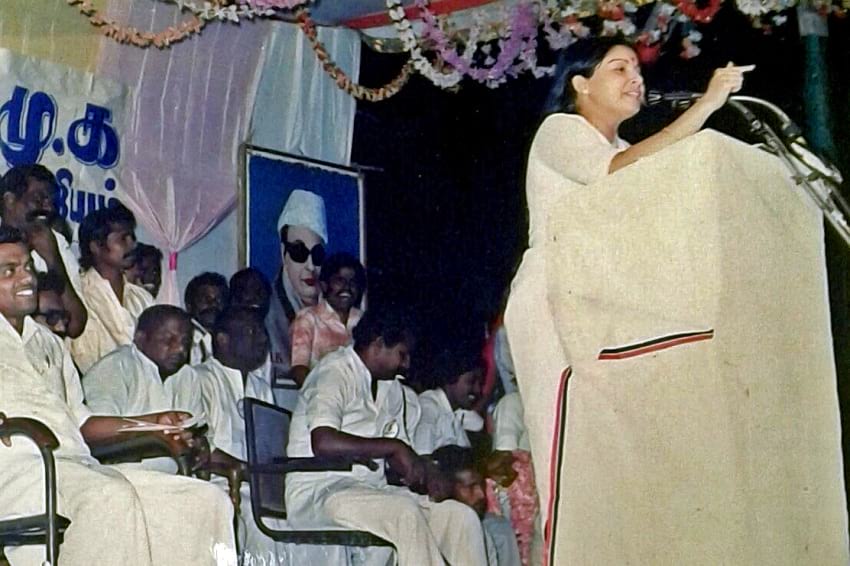 Jayalalithaa speaking during a conference, circa 1980. (Wikimedia Commons)

“Though women had always been swayed by him, with Jayalalithaa, even greater numbers were drawn to the conference. ‘It was the first time any political party in Tamil Nadu had succeeded in gaining the support of women in such a fashion,’ points out Panrutti Ramachandran, an MGR acolyte.”

In In June 1982, Jayalalithaa officially became a party member of AIADMK. Her move was anticipated with both keenness and hesitation; some thought she’d be a misfit and some knew Jayalalithaa was born to a be leader with her supreme intellect. Always drawn to serving and helping people, Jayalalithaa thought this could be her way to attain her long lost dream, as the time and chance to pursue education and a noble profession was long gone.

“It was her idea of ‘being of service to the people’ that made her think of joining politics, she said.”

The decision to join politics was a goodwilled and highly contemplated one. She knew what her decision would entail, says the author. Vaasanthi, writes about the actor’s pursuit of politics and the changes she had to undergo to de-glamourize her image. Her magnetic presence and appeal gathered large crowds, making the party favourable against the rival DMK.

“When MGR made her the party’s propaganda secretary, Jayalalithaa’s stature and importance grew manifold. She very consciously set about to ‘de-glamourize’ her appearance, perhaps in an attempt to wipe out the stigma attached to her as an actress.”

She worked diligently and did not limit herself to the campaigns, writes the author. She was as fierce behind the scenes as she was on the stage canvassing for her party. Her dedication to undo the lapses and wrongs in the administration of the party was commendable. Senior members of the party felt insecure with her pace and growing stature. And as hate campaigns brewed to malign her working, her fluency in English landed her at the Rajya Sabha as a Member of Parliament. This was just the beginning of her long political career.

The author and journalist Vaasanthi, then discusses about Jayalalithaa’s ordeals as a party member of AIADMK. Her popularity and functioning as an MP ruffled a few feathers in the party and it was soon divided into anti and pro Jayalalithaa houses. This was one of the many hurdles she had to cross to become the leader we know of today.

“Jayalalithaa’s story proves how difficult it is for a woman, facing odds and bereft of political pedigree, to survive in Indian politics. It is also a story, therefore, of how a woman tries to transform herself to survive in a male-dominated society.”

The book The Lone Empress seeks to tell a story of a charismatic leader, a leader adored and revered like no one else before. Vaasanthi, with her gripping style and narrative, hooks the reader till the last page. The much anticipated and waited portrait of Jayalalithaa fully satisfies the reader’s desire to know more about her. Drawing on Jayalalithaa’s memoirs, and interviews with her friends and colleagues, the book makes for an interesting and delicate read. 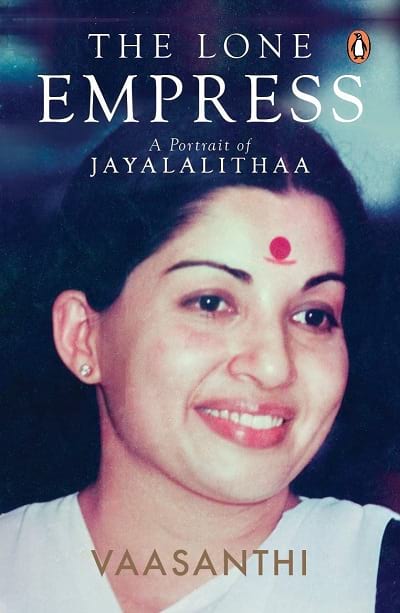 The Lone Empress- A Portrait of Jayalalithaa | By Vaasanthi

“My book was a journalist’s attempt to understand the enigmatic persona of the most colourful, dynamic and determined woman politician that Tamil Nadu, nay, India has ever seen. –Vaasanthi”