Long after the release of Peter Jackson’s famous and massively successful ‘The Lord of the Rings’ and ‘The Hobbit’ trilogies, public interest in the movies remains high. As a result, the movie set location has become a tourist attraction. The Hobbiton movie set is situated on a family-owned sheep and cattle farm in New Zealand. Whether you are a fan of the movies or not, it is a very scenic place and one that you will probably find interesting to visit.

Peter Jackson wanted his movie depictions to remain as true as possible to the descriptions in J.R. Tolkien’s epic ‘The Lord of the Rings’. He, therefore, sent out location scouts all around New Zealand to find an area with a decidedly old-world feel to it. He wanted a place with rolling green hills, magnificent trees, and lush pastures. In order to find just such a place, his location scouts even conducted aerial surveys of the countryside. On one of these aerial searches, they flew over the Alexander family’s land, and Peter Jackson had an immediate ‘A-Ha!’ moment. He knew he had found his Middle-Earth region. It closely resembled J.R. Tolkien’s portrayal of The Shire, and it was just what he had envisaged for his movies. 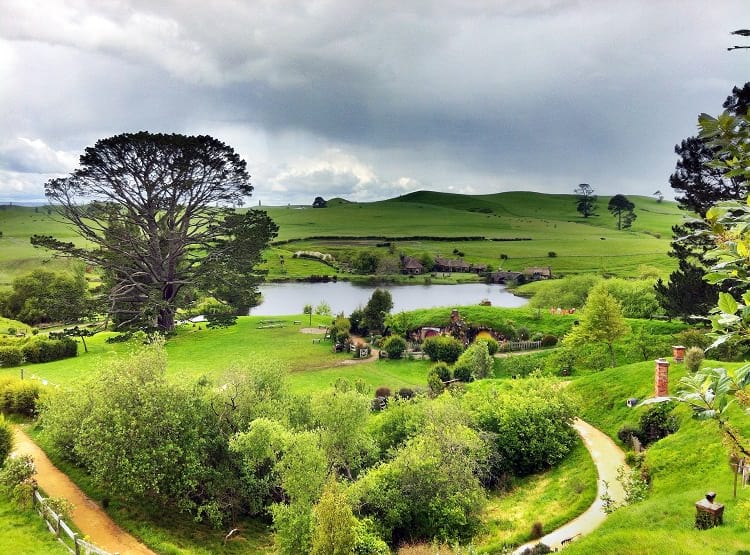 The set location is on the vast 1250-acre sheep and cattle farm owned by the Alexander family. The farm is in the agricultural town of Matamata in the Waikato region and is surrounded by the grand spectacle of the towering Kaimai mountain ranges. The Alexanders have been farming in the area since 1978, and their farm includes several thousand sheep that they shear themselves and a few hundred Angus cattle. The main farm income comes from the wool, meat, and beef they sell.

The Alexanders allotted 12 acres of their farm for building the movie set. This area includes a magnificent pine tree, a wonderful lake, and a steep hillside. The towering pine tree became the Party Tree in the movie, and the hillside overlooking it accommodated Bag End. Aside from the scenic beauty of the area, what made it even more perfect for Peter Jackson was the fact that there are no power lines or any other signs of modern life marring the horizon. It is like going back to an unspoiled past era.

The movie crew began the set construction for ‘The Lord of the Rings’ in March 1999. The work took them nine months and required the assistance of the New Zealand army. Under very tight security and secrecy, the movie crew set up the 39 hobbit holes across the area. These were made using untreated timber and ply as well as polystyrene. Peter Jackson began the filming in December 1999 and wrapped it up three months later. Then, in 2009, Peter Jackson and his crew returned to the area to film ‘The Hobbit’ trilogy and, at this time, they rebuilt the set anew. They refurbished the hobbit holes and added five more to bring the total number of hobbit holes to 44. They put in a lot of details this time around. The finished hobbit holes look cosy and lived-in and have charming gardens around their entrances.

After the filming for ‘The Lord of the Rings’ ended in 1999, the crew demolished all but 17 hobbit holes. Even though only plywood frameworks of these remained, they were apparently enough to serve as a tourist attraction. The Hobbiton movie set began welcoming visitors as part of guided tours in 2002. After Peter Jackson’s crew renovated the set in 2009, it became even more of a tourist draw. Aside from the eye-catching hobbit holes, the Hobbiton movie set has a double arched bridge, a mill, and a Party Tree. Walking through the set can really make you feel like you have been transported right into the movies. The Green Dragon Inn opened in 2012 and soon became a popular venue to end the visit to the Hobbiton movie set.

To reach the town of Matamata, you have to undertake a two-hour drive from Auckland. If you are coming from Taupo or Waitomo, it is a one-and-a-half-hour drive. From Hamilton, Rotorua, and Tauranga, it is a 45-minute drive.

The set is open to visitors from 9 a.m. to 5 p.m. throughout the week. You will need to make a prior reservation, however, and buy tickets online from the Hobbiton movie set website.

You can choose to visit the Hobbiton movie set from Matamata, The Shires Rest, and Rotorua Hobbiton Shop. The Shires Rest at 501 Buckland Road in Matamata is recommended if you’re driving your own vehicle as they offer free parking for the tour duration. If, however, you are going to require transportation to the set and back, you can take a bus from 45 Broadway in Matamata and from the Rotorua Hobbiton Shop at 1235 Fenton Street in Rotorua. 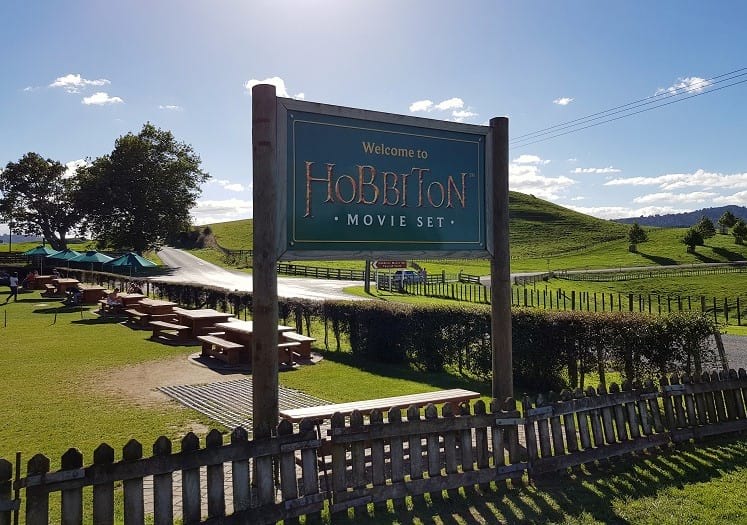 After you arrive on the set, an entertaining and knowledgeable guide will show you around the 12-acre area and fill you in on how the movies were made. You will walk past the hobbit holes and the mill and end the tour with a free drink at the atmospheric Green Dragon Inn. The menu at the Inn includes special dishes and beverages, and there is also a gift shop on the set.

You can also take the evening tour. This is highly recommended as it includes a free drink—handcrafted traditional ale, apple cider, and non-alcoholic ginger beer— in a fireside armchair or in the beer garden at the Green Dragon Inn and then a lavish banquet in the Inn’s dining room. Afterwards, you can walk through The Shire village along winding pathways, illuminated by lamps and handheld lanterns, and see the lanterns glowing warmly inside the hobbit holes and their chimneys emitting smoke from the fireplaces within. It leaves you with a very happy, all-is-well-with-the-world feeling. The visit to the Hobbiton movie set may seem a bit pricey, considering the short duration of the visit, but many people consider it worthwhile to see the imaginative set and spend some time in one of New Zealand’s most breathtakingly beautiful regions. Also, the good news is that home-stays are available on many of the nearby farms and, so, you can enjoy more of the stupendous countryside at your own leisure.

Information for visitors to the Hobbiton Movie Set

• Dress appropriately according to the weather and wear comfortable and waterproof walking shoes. If it rains, the guides can provide you with umbrellas.
• Don’t forget to bring your camera along. There are so many photo opportunities here, you will find yourself clicking pictures the entire time.
• You can hire the Green Dragon Inn, the Party Marquee, and Yard Flat for private functions.

Enjoyed this article? Also, check out “Llanfairpwllgwyngyll: A Mindless Tongue Twister or a Place in UK?“

Previous Article
A Cross-Dressing Explorer, Isabelle Eberhardt Crossed Geographic and Social Boundaries to Follow Her Heart
Next Article
History of Lamborghini: Clash Over a 10 Lire Clutch Led to the Birth of Lamborghini Super Sports Car