Rain of Animals: A Rare Scientific Phenomenon Where Animals Seem to Fall from the Sky Inexplicably An artwork of cats, dogs and pitchfork falling from the sky. (George Cruikshank / National Gallery of Victoria)

Drops of water falling from the skies are normal, also the fall of snow and ice. But if rain, apart from these three, is seen to precipitate animals or parts thereof, it surely isn’t normal. Such cases have been documented in history, as well as in scientific journals. So, these can’t be dismissed as hearsay, conjecture or prank. What is it that defies logic and tempts people to believe that animals can rain just like water drops?

Rain of Animals is part of human history

Animals falling from the sky, like water drops in the rain, are part of human history and folklore. Frogs and fish raining find mention in the works of the Roman writer, Pliny, the Elder. Pictorial depiction of animal rain on rocks has been found in archaeological surveys. Also, on the record are thousands of eyewitness’s accounts testifying to these weird rainfalls in the course of human history. Indeed, the events were scrutinized and many dismissed it as fake. Yet the frenzy persisted, leading to the lasting impression that animals can indeed rain down like drops of water.

A report on June 2009 says multiple instances of animal rain happened in the Ishikawa region of Japan. A 55-year-old, standing close to a parking lot in Nanao city, said he heard a loud bang and on rushing in the direction of the sound, he saw dead tadpoles, in their hundreds, lying on the windshield of cars. Likewise, in 2010, live fish fell from the sky on successive nights in Lajamau, Australia. Curiously, the same thing happened in this town, even in the year 1974 and 2004. Fish fall at Marksville, America, as narrated by a wildlife biologist, was more spectacular. He recorded the density of the fall as one fish per square yard and reported that fish fell on roads and housetops. He took care to collect and preserve the fallen fish for public demonstration.

No single explanation answers all queries

Now, a reality check. At the outset, it would be safe to assume that at least some of the stories may have been hyped. Animals dying en-masse, in a group, is a well-known matter of fact. Could animal rains be just that, the deaths in a group? In the year 2011, Black Birds fell in clusters in Arkansas and Louisiana in America, and in Sweden within 5 days of each other. Arkansas, in addition, witnessed a lakh of drum fish die off in a 20-mile stretch. The event was explained thus: the New Year fireworks frightened the roosting birds that then flew erratically with disastrous result. Flying avian may collide with high tension electric wires or be hit by hail or lightning. Sudden panic too can kill birds with cardiac arrest. Regarding drum fish, the incident was linked to some unidentified disease as only one species was involved. However, no single explanation clears all doubts related to events.

Animal rain is part of the human psyche as well

Folklores impact human mind subtly, subconsciously. So, for all such cases, the influence of folklores validating animal rains can’t be overruled.  The public mind primed to such stories can’t be rational when the rain of animal is reported from real life. It fits into a pre-set mental frame.  Also, man is generally confined to his daily chores and has no time to ‘stand and stare’, to have a fulsome view of the environment he lives in. In effect, he knows little about his natural surroundings.

Maybe the living or dead which one sees spread on the ground in rain or storm, already existed there, hidden somewhere. Seen for the first time, it is erroneously inferred to have ‘rained’ down. In reality, it was relocated to a different, visible place. The dying or died-off organisms already existed in nearby locations, but weren’t observed in normal times. Some exigencies popped them out and bashed them in an unseemly place. Fish, frog, birds and other animals were just lifted from their homes and thrown out in open. This could happen with or without the presence of rains, storms, accidents and disease conditions.

Flying birds may drop their food during the flight

Interestingly, the cases of animal rain keep appearing time and again. And also the speculations and hypothesis about them. Like Indian officials speculating that a flock of migrating pelicans carrying fish in their beaks dropped them while flying, creating an impression of fish rain.

An incident of 3rd March 1876, mentioned in Scientific Americana, is about chunks of meat falling from the sky. The chunks fell in a 100×50 yard area in Kentucky, America and were found to be venison or mutton. The meat shower happened because buzzards, the meat-eating birds, vomited while flying. If one bird in the flock of this species throws out ingested food, other birds disgorge in camaraderie. Thus, pieces of meat fell on the ground.

Whirlwind throwing animals up in the air could be a possibility 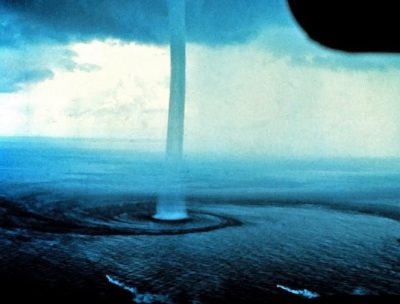 Waterspout off the coast of Florida. (NOAA)

French physicist Andre Marie Ampere was the first scientist to go deep into the matter. According to him, gusts of wind carried a bunch of frogs up in the air to great heights. Therefrom, the frogs fell to the ground, like it’s raining. The current hypothesis of ‘waterspouts’ is the probable cause of animal rain vibes in Ampere’s view.

Waterspout, a kind of tornado formed over water bodies, can suck in animals and throw them up in the sky. This, incidentally, explains why most such rains reveal fish and frog only. Other types of tornadoes can verily throw other organisms up in the air, like worms and spiders. But the rain of such organisms is rare. The popular phrase ‘raining cats and dogs’ doesn’t have any scientific basis.

The mystery remains unsolved. How come only one species is seen involved at a time? It’s either fish or frog. Why not fish and frog, both together? Ideally, a combo is a distinct possibility when airlift happens from a habitat having multiple species. Quantum of airlift from any water body has not been reported or calibrated as yet. As such, waterspout doesn’t explain all about the rain of animals.

Menacing storm, circling winds, heavy rains and hordes of fish flapping in rain were observed in Central America. An investigation by the National Geographic in 1970 revealed that fish which seemingly rained down were blind, uniformly sized and alien to fish living nearby waters. The rained fish, the investigation said, came from underground rivers. How exactly they came over ground from underground, along with the storm every year in the month of August, couldn’t be explained. Albeit one thing is clear. It isn’t a fall from skies, but just a transfer to a new location on the ground.

Rain can be unusual even without the ‘animal’ factor

Bizarre rain can happen even without the ‘animal’ factor as happened in Siberia in January 2007. In a place close to Kazakhstan, where a heavy sandstorm blew a while back, orange coloured snowfall was seen. The investigation revealed that the colour was on account of orange coloured sand mixing with snow. Even red coloured rains are reported, and surprisingly, these predate the ‘animal’ rains. Homer’s epic poem Iliad talks of blood rain. That can be rated poetic imagination, but there are references to red coloured rain even post this seminal literature. The one in Kerala, India, happened between 25th July to 23rd September 2001, when red coloured rain was reported. In bits, the rain was perceived to be of yellow, green and even black colour.

Algae and dust particles may have caused red rain

The red rain was investigated by Centre for Earth Science Studies, Kerala. The red colour was attributed to dust particles, dissolved salts and polluting elements. The dust particle could be from the Sahara Desert or a meteorite. The microorganisms from Africa and South America, algae and other aquatic life could also be responsible for the colour. The Red Rain of Sicily in 1872 was ascribed to meteoric dust and a slew of organic and inorganic compounds. Godfrey Louis and Santhosh Kumar Mahatma Gandhi University, Kerala, contended that red colour of rainwater was on account of alien microbes released from a disintegrating comet, and not because of algae.

Animal rain, it seems, will remain in reckoning even in the times to come.

Enjoyed this article? Also, check out “2006 Sweet Seawater Incident: When the Seawater in Mumbai had Miraculously Turned Sweet“.