Highgate cemetery situated in North London, England is also a nature reserve. It came into existence in 1839 as London saw a massive boom in population during that time. It was one of the seven cemeteries, known as Magnificent Seven, to come into existence to bury the dead from the First and Second World Wars and is considered to be one of the most fashionable cemeteries.

As the number of deaths reduced after the Second World War, the cemetery fell into a ruin. During it’s time being neglected, the cemetery became a sanctuary for birds and animals. It became home to over 40 species of birds, 20 species of butterflies, and certain forest creatures like spiders, foxes, badgers, and bats. Nature took over; ferns, mosses, and wildflowers were seen all over the place.

The cemetery has two sections, East & West side, West being the older of the two. The West side requires a tour guide and isn’t freely accessible to the public. It contains at least 70 popular gothic architecture including the Circle of Lebanon, Egyptian Avenue, and Terrace Catacomb. A lot of the architecture and trees have existed from well before the 19th century, for instance, a certain redwood tree has been there since the cemetery was initially designed. 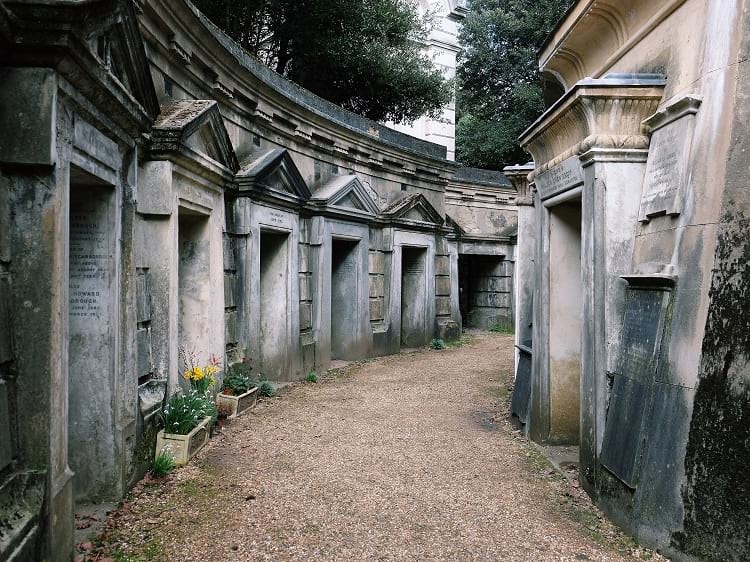 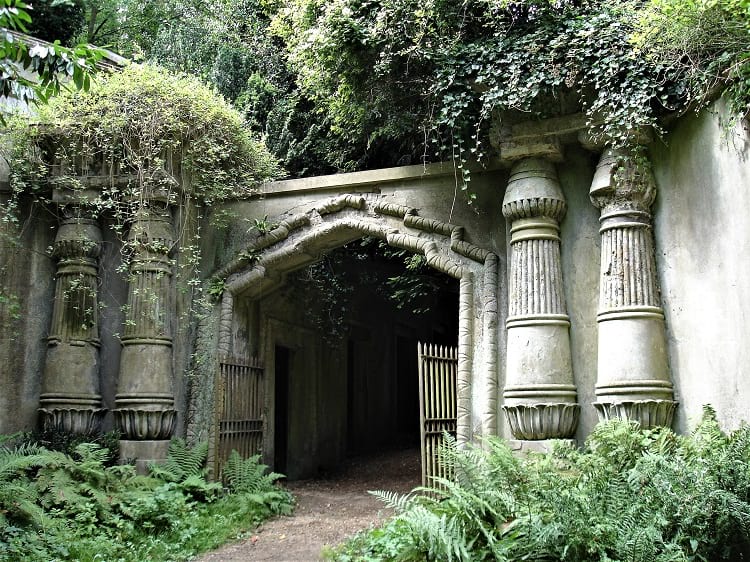 The newer East side is easily accessible to the public; people can request burials here and it is also open for self-guided tours. It has a gothic aesthetic with little paths that you can explore, weathered tombs, overhanging canopies of trees, and ivy-covered memorials. The cemetery began with a decent 17 acres, of which 2 acres were reserved for the burial of Non-Anglicans. The cemetery later became so popular that the property was extended by 20 acres on the East side.

Eventually, in 1975, the cemetery went bankrupt. In the same year, a non-profit organization called The Friends of Highgate Cemetery was born to protect and preserve the blooming flora and fauna of the cemetery. After about a decade of the organization’s efforts to restore and conserve the cemetery, the cemetery was listed as Grade I under the Historic England Register of Parks and Gardens of Special Historic Interest.

The Register lists all kinds of places like battlefields, monuments, buildings, parks, and burial grounds. Listing is done to preserve and protect sites to create awareness of spaces, their value and preservation. All sites included in the Register are protected legally, and to be included in the list it is mandatory to register with them. They also usually only list sites of particular importance to protect them. They pick sites such as gardens, grounds, and town squares, but sometimes even cemeteries and pumping stations are included if their landscaped designs are deemed protectable.

The grave of Karl Marx, a German philosopher and revolutionary, used to be one of the most visited graves in London. He was initially buried in the East part of the cemetery but in the 1950s his grave was moved to the Westside. The tomb is made up of a bronze bust of Karl Marx set up on a marble pedestal, on it you can read the last few words of the Communist Manifesto written by the deceased. The cemetery not only acted as a makeshift shrine for Karl Marx for the longest time but also became a suitable spot for haters to attack via bombing like the attack that took place in 1970. The grave of Karl Marx was the most visited graves until recently when George Michael, an English singer and songwriter, was decided to be buried here next to his mother. Michael Faraday – electromagnetism scientist, George Eliot – Victorian novelist, Douglas Adams – science fiction author, and Rowland Hill – inventor of the postal system are some other notable people buried here.

The first person, Elizabeth Jackson of Little Windmill Street, was buried here on 26 May 1839. The cemetery is still functional and at least 30 plots are sold each year. Only people who are at least 80 years old and those that are terminally ill can request plots beforehand, for the rest of the people plots are only available for immediate use.