Luigi Galvani: The Man Who Fuelled the Idea of Re-Animating Human Corpses Death is inevitable. And no living organism – whether big or small – can escape it. After a human being dies, rigor mortis sets in and the dead body starts to stiffen, as all physiological functions start to shut down one by one. But once a person passes away and his bodily functions stop, does the corpse have the capability to move on its own or by applying an external force to it?

Luigi Galvani was one such physician and biologist, who through his experiments on animal corpses reached the conclusion that when electricity is passed through a dead body, it twitches, thus giving rise to the term bioelectromagnetics. 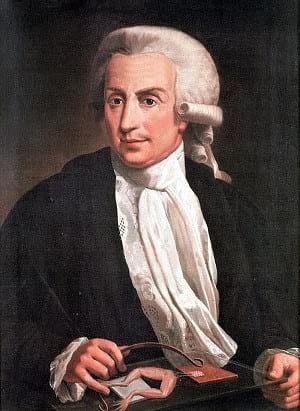 Born in Italy to a physician father in 1737, it was but natural for young Luigi Galvani to have an inclination towards medicine. He obtained his degree of medicine in 1759 from the University of Bologna, Italy, where he also started delivering lectures in the field of anatomy. He was also appointed as a professor of obstetrics at the Institute of Arts and Science.

In the year 1762, Galvani married Lucia, daughter of his mentor Professor Gusmano Galeazzi, where post the death of his father-in-law, he carried forward the former’s research works. Galvani had developed a keen interest in animal anatomy while delivering lectures at college, which led him to start his investigative work in the same field.

If legends are anything to go by, Lucia is once said to have developed tuberculosis in 1780. With her condition deteriorating, she asked her cooks to prepare frog soup, which would cure her of the disease soon.

While the servants struggled to find a place to start preparing soup in a large quantity for her, Lucia ordered them to keep the frogs and other ingredients in her husband’s lab. One servant placed a skinned frog close to an electrical machine and Lucia, who was supervising her cooks, witnessed something out of the ordinary.

When the cook picked up a knife, a spark flew from the electrical machine and touched it. And when the knife touched the frog in turn, the dead animal’s legs twitched and that is how Luigi Galvani is said to have come across the phenomenon. Social scientists argue that it was Lucia Galvani, who deserves to be credited with the theory of bioelectromagnetics, for her desire to have frog soup, but loyalists think otherwise.

Although the frog soup theory is debated, the twitching of a dead frog’s legs, however, is part of the original experiment that Galvani carried out in his laboratory. Facing tough competition from his contemporaries like Alessandro Volta and Benjamin Franklin, Galvani became the first scientist to discover that electricity had the capability to alter physiological actions in a dead body.

He observed that muscles and tissues in animal corpses contained bioelectric forces and they contracted when electricity touched them with a metal conductor. His ten years of extensive research in the field eventually led him into a controversy with his competitors, even though they admired him for his work.

Galvani’s experiments on dead animals led common people to believe that the biologist had come to know the hidden meaning of life and that he had received the extraordinary power to bring the dead back to life. Although nothing of that sort happened, his subsequent invention of the galvanometer and the entire process known as Galvanism has now become a part of the modern science curriculum all over the world. Also, the modern techniques of application of electric shocks to cure an array of medical conditions like paralysis and rheumatism, stemmed from Luigi Galvani’s experiments back in the 1700s. 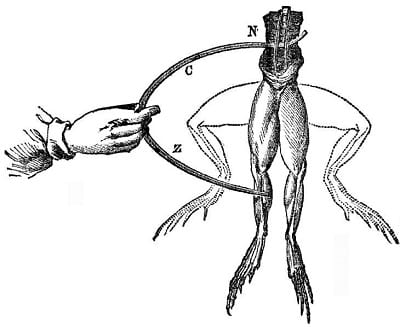 Frankenstein; or, the Modern Prometheus by Mary Wollstonecraft

Renowned English novelist Mary Shelley, who wrote the cult classic Frankenstein, Or The Modern Prometheus is said to have been inspired by Luigi Galvani’s experiments and written the spooky story of the famous re-animated corpse. While on a holiday in Geneva, the process of galvanism gave her the idea to write her most famous book in 1818. It told the story of a mad scientist, Dr. Victor Frankenstein, who creates a grotesque monster by joining together parts of a dead human body and passing an electric current through it to bring it back to life.

Shelley is also said to have acknowledged her source of inspiration and written about the term Galvanism in one of the paragraphs of her bestselling novel.

How his works influenced others

After Volta coined the term galvanism in his honour, Galvani went on to carry out research work in the field of bioelectromagnetics for a long time, while also working on his experiments simultaneously. But in the year 1790, Luigi Galvani’s health began to decline post his wife’s death due to TB. This came as a setback to him and his work began getting affected too. In 1796, Napoleon invaded Bologna, which forced the biologist to quit working finally. Galvani moved into his ancestral home with his brother, where he breathed his last, two years later in 1798, leaving behind a legacy that is more than two centuries old.

After Galvani died, his nephew decided to carry forward his legacy and so in the year 1803, Giovanni Aldini pioneered the art of reanimation of human corpses. In London, a twenty-six-year-old George Forster was executed for murdering his wife and child and the freshly decapitated body of the criminal was brought to Aldini, who was on a Europe tour, demonstrating his skills.

Aldini attached copper and zinc batteries to the dead body and passed current through it. Bystanders saw that the cadaver’s jaw and facial muscles began twitching and one eye opened due to the quivering. A little while later, when Aldini reattached the poles of the battery to other parts of the body, the entire corpse began to move as if dancing in a reanimated form, leaving audiences spellbound as well as spooked out. He carried out his experimental shows in different parts of the continent and also began working on carcasses publically.

Luigi Galvani dedicated his entire life to studying the effects of electricity on dead animals after discovering it by chance at his lab, but the need to feed people’s curiosity to know more in the field gave his nephew a grisly opportunity to work on human cadavers. Common people might not understand what galvanism or a galvanometer would mean, but Mary Shelley’s story of Frankenstein surely gives them a peek into his fruitful and rich heritage.

Recommended Read:
An Account of the Late Improvements in Galvanism: With a Series of Curious and Interesting Experiments Performed Before the Commissioners of the French National Institute, and Repeated Lately in the Anatomical Theatres of London | By Giovanni Aldini, Hooper Robert 1773-1835