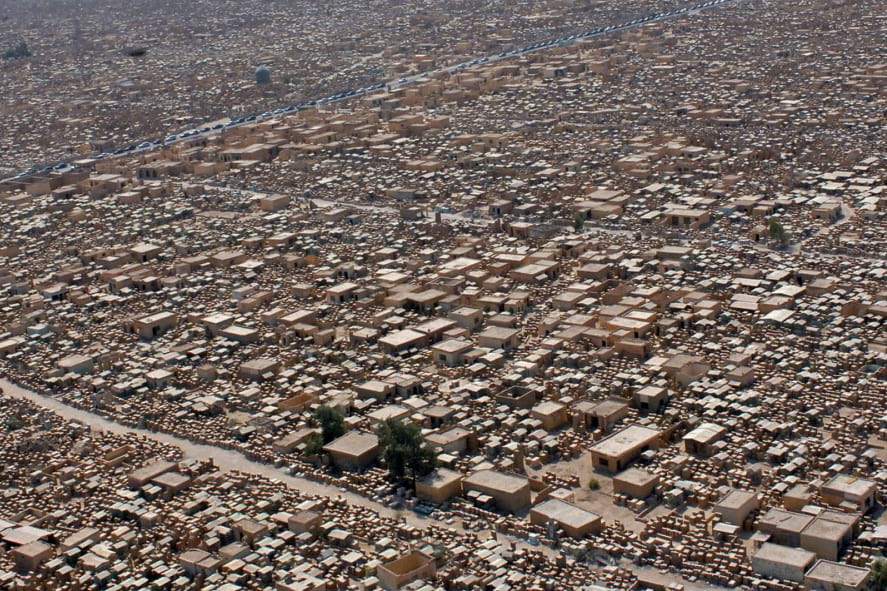 Situated approximately 180 kilometres in the south of the Iraqi capital of Baghdad, Wadi-us-Salaam, which also means Valley of Peace in Arabic, occupies around 1,500 acres of land in Najaf – considered the third most revered city in Islam. Contrary to the colourful metropolis that looms in the foreground, the mud and clay-built Wadi-us-Salaam has stood silently in the background since ages. The tombs, all tightly packed together in the vast necropolis resemble a crammed city bustling with activity from afar. But a closer look inside the graveyard only paints a gloomier picture, for the place is silent with the dead buried inside it since a very long time.

As per the Shia Muslim beliefs, Abraham (or Prophet Ibrahim in Islamic teachings) purchased land in Wadi-us-Salaam, and he believed that the land was part of paradise, a claim which Imam Ali, too, corroborated after him. Said to be active for more than 1,400 years, Wadi-us-Salaam has seen daily burials since the Parthian Empire, which lasted between 247 BCE and 224 CE. As many as five million dead people (and counting) are buried in the Valley of Peace, which also holds traditional significance to Muslims across the globe. The Shias are of the opinion that Wadi-us-Salaam would be the final destination of the souls of the faithful, no matter where the dead were originally laid to rest. They believe that being buried close to Imam Ali, the son-in-law and first cousin of Prophet Muhammad will lessen their sufferings in the afterlife and on the Day of Judgment, the dead shall be resurrected along with their most venerated religious leader. 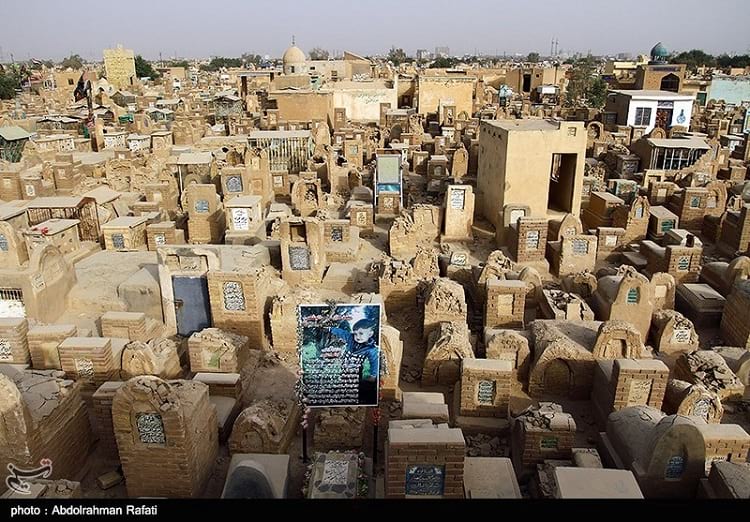 The crypts stretch far and wide in the vast area and the dead population in the gravesite is believed to be more than that of a modern city comparatively. Each year the burial ground witnesses a surge in its number with the deceased buried in layers and layers beneath the earth. Right from honored Islamic prophets to priests, kings and Sultans and Islamic leaders from all walks of life are laid to rest at Wadi-us-Salaam. Since the cemetery is located close to the holy memorial of Imam Ali ibn Abi Talib, many Shia Muslims from all parts of the world request to be buried at the world’s largest burial site. People from far away countries like India, Pakistan, Southeast Asian nations and closer ones like Iran, the Middle Eastern countries and Lebanon to name a few, visit Wadi-us-Salaam to bury their dead there.

Description of graves at Wadi-us-Salaam

Wadi-us-Salaam is said to be the only burial place in the world, which has stuck to the interring customs followed from more than 1,400 years ago. The graves are built using plaster and baked bricks, standing at different heights. The wealthy build large, family-sized tombs that have domes on top, while the sepulchres from eight to nine decades ago can be seen high in the background with rounded off tops. Lower graves and tower-like graves can also be seen dotting the cemetery that stretches into the horizon in Najaf as far as the eyes can see. Some graves are placed in catacombs, buried deep inside the ground that can be accessed only by ladders. Each grave is said to hold as many as fifty bodies. The land on which Valley of Peace is built is so enormous that people sometimes have to use bikes to traverse the maze-like burial site to reach their loved ones buried in the graves. The crypts usually smell of rose water that relatives sprinkle on the tombs when visiting their dead relatives. A shrine dedicated to Muhammad al-Mahdi among the graves. (Abdolrahman Rafati / Tasnim News)

Rituals followed at Wadi-us-Salaam before burial

The deceased are given a proper burial at the site conforming to the ancient Islamic traditions, which involve a number of rituals. Before a dead is finally laid to rest, the body of the deceased is given a ghusl, or in other words, the body is bathed one last time before it is wrapped in a qafan – the white shroud in which corpses are draped. Funeral prayers of the departed are conducted inside the shrine of Imam Ali, where the body is circumambulated thrice around the mausoleum. Verses from the Holy Quran are recited at the cemetery while lowering the body into the grave, which is said to ease the passing of the dead into the afterlife.

While the neighbouring countries of Iran and Iraq fell into chaos, with the onset of war in the eighties, the number of deceased buried at Wadi-us-Salaam doubled up very quickly. As many as two hundred and fifty bodies were buried during the Iraq War in a single day. The gravesite was also the scene of severe clashes during the height of the Gulf War of the nineties. The rebels sought refuge in the crowded graveyard and the Iraqi army had to raze the tombs down to the ground to comb for insurgents. Hundreds and thousands of bodies were interred at the gravesite during that time. Now the burial place also has tombs of soldiers that die defending their country.

Also, with Iraq bogged down by conflict in the past decade, the demand in burial sites has considerably shot up. With burial plots now running out at Wadi-us-Salaam, many reported cases of stealing or illegal reselling of the plots have come to light. Also, with the ISIS conflict currently plaguing the country, burial sites for victims have become quite a problem. The prices of burial plots have also risen up in recent times, which haven’t deterred people from burying their dead at the Valley of Peace.

While Wadi-us-Salaam awaits a permanent mention in the list of UNESCO’s World Heritage Site, the ancient and biggest cemetery in the world hasn’t bowed down to the modern ways yet. It stands witness to traditional Islamic rituals that have been upheld since time immemorial and it continues to attract more and more deceased people from all over the world, along with their living relatives that visit in the millions every year.