Vardzia: The Mesmerising Cave Monastery that Protected Georgians for Decades 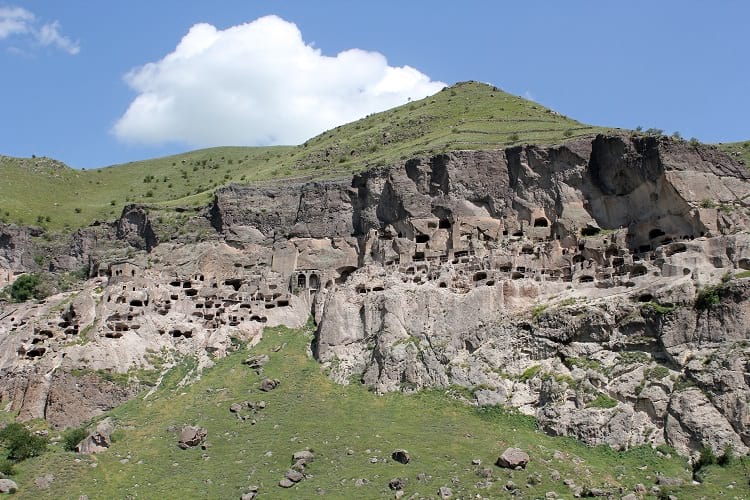 Georgia is located where Asia ends and Europe starts. It is flanked on three sides by Russia, Azerbaijan and Armenia, with the Black Sea forming its west coast. The country is known for the Black Sea beaches, the Caucasus Mountain range and the outstanding Vardzia Monastery.

Steeped in rich culture and history, the 12th century saw the rise of the Georgian empire, and what came to be known as the golden age of Georgia. With the gradual expansion of the Mongol empire in the early 12th century, the Georgian kingdom was preparing itself against an imminent attack.

King Georgi III started work on a hidden cave fortress in 1156, as a safe haven for the Georgian people in case of an attack. Legend has it that the King’s daughter, Tamara (Tamar) often accompanied him to the site of construction. One such day, Tamara slipped away from the watchful eye of her Uncle. On being called out for, she shouted back, “Ak var, dzia” which in Georgian means, “I am here, Uncle.” Apparently, her last two words echoed throughout the cave and were heard by her father, King Georgi III who decided to name the fortress just that! Vardzia. The caves of Vardzia. (I kynitsky / Wikimedia Commons)

Tamara took over the kingdom in 1184, upon her father’s death. However, she had co-ruled with him for six years before his demise. Though Tamara was the first female ruler of Georgia, she was crowned ‘king’. She soon became famous as Tamar the Great, addressed as King Tamar.

She ensured the continuation of work on the cave fortress, and in 1185, she had it consecrated. Digging was underway on the side of the Erusheli Mountain. Tamar oversaw the finish of the expansive fortress and established within it places of meditation and prayer. The finished underground structure became a township of 13 levels with nearly 6000 cave living quarters.

The emergence of a holy city 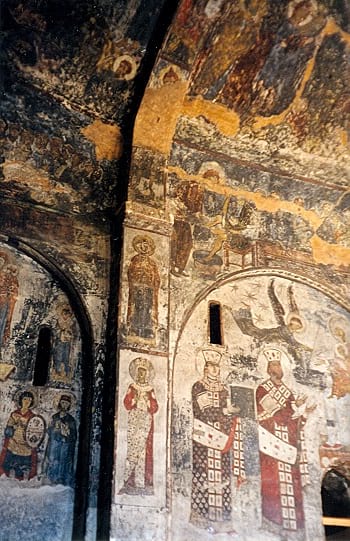 The Vardzia was adorned with fresco work, paintings and pieces of religious significance. The access to this hidden town was through a concealed tunnel that had its entry near the banks of the river, Mtkvari. Making full utilisation of the extremely rich fertile soil of the Erusheli Mountain, the slopes were converted into terraces for farming.

This cave town boasted of 15 chapels adorned with murals and right in the heart of the town stood the magnificent Church of the Assumption with an enormous bell tower.

Slowly it started transforming into a holy city, housing as many as 2000 monks and gaining popularity as the Vardzia monastery. The monks designed an intricate irrigation system to ensure the supply of clean drinking water into the city and to irrigate the land.

This cave city also holds 28 wine cellars. There was a throne room and a huge reception area. Vardzia was the safest structure that could have been designed, considering it was completely hidden from view, inside caves. This was not only a formidable defence but also made the city impossible to be attacked. The Georgians were safe under the mountain, inside this secret city. 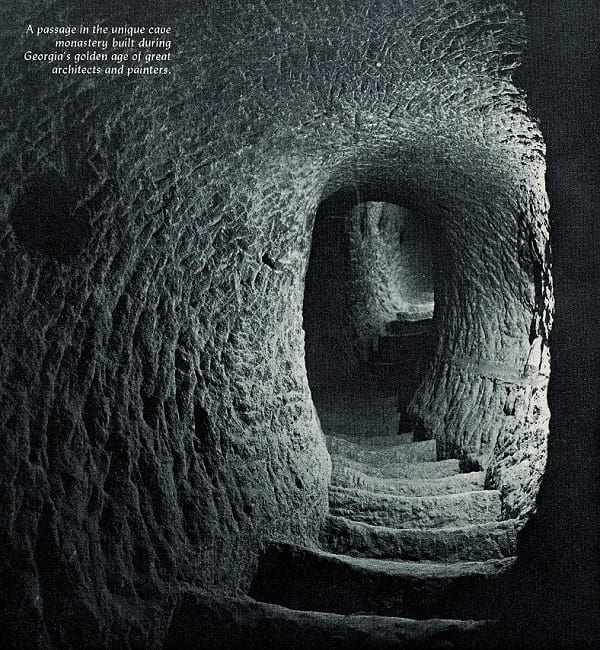 The cave monastery ensured that the Mongols could not attack Georgia but sadly, it could not protect the people from a natural calamity.

Nearly a century after its existence, a devastating earthquake in 1283 destroyed more than half of the monastery. The Erusheli mountain had been ripped apart in places, exposing the hidden city. Notwithstanding the upheaval, a community of monks continued to live there for centuries.

In 1551, the Persian Shah Tahmasp I attacked and plundered the monastery. The monks were killed and treasures that represented the rich culture of the Georgians was stolen. This beautiful monastery that protected its people for centuries finally lay desolate. 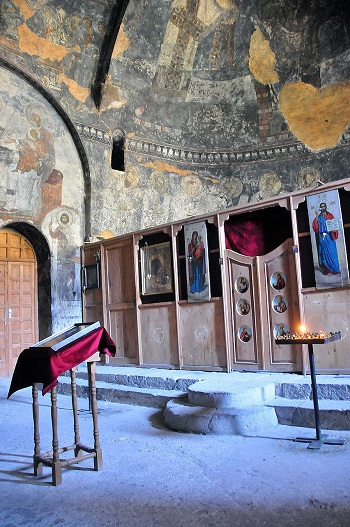 1861 saw the resettling of monks in Vardzia, though it continued bearing onslaughts of ransacking and stealing. Today, it is home to a group of monks who zealously maintain living conditions in the caves. Spread over 500 metres, it is a testimony of the Georgian culture and religion.

Located in the 1995 formed historic region of Samtskhe-Javakheti, it continues to enthral people with its art and architecture. Known as the ‘Honour of Georgians’, the cave has been a part of the Vardzia Historical-Architectural Museum-Reserve, since 1985. It was included in the UNESCO World Heritage List as a Cultural Site in 1999, and then in 2007, as a Cultural and Natural Site.

In 2012, restoration work started on the Georgian Orthodox Church of the Dormition, also known as the Church of the Assumption. Two arches of exceptional architecture lead into the portico of the church which is house to the famous bell tower.

Inside, the walls of the church are full of frescoes portraying scenes from the New Testament. The north wall has a mural of Tamara holding the model of the church, standing next to her father, King Georgi III. The sheer grandeur of the place is proof of the knowledge of construction, architecture and planning that the people of Georgia had, centuries ago.

The resilient Vardzia not only survived the force of time and nature but is recognised today as the most impressive, rich cultural heritage structure of the country. King Tamar’s favourite residence until her death in 1213 is now her legacy and a fond memory of Georgia’s greatest ruler.

Enjoyed this article? Also, check out “Traditional Yaodong, Shaanxi Province: The Cave Dwellings in Which Many Chinese People Still Live“.

Previous Article
Statue of Unity: India Unveils the Tallest Statue in the World
Next Article
The Tale of Topsy the Elephant That was Electrocuted, Poisoned and Strangulated