Tomb of Bibi Jawindi: On Cross Roads of Islamic Ethos

The Tomb of Bibi Jawindi is a 15th-century relic, which as of now lies in dilapidated condition. Title of UNESCO World Heritage Site has been sought for it as it symbolizes the Sufi sect as preached by the woman Saint – Bibi Jawindi.

Bibi Jawandi was the great-granddaughter of the famous Sufi saint Jahaniyan Jahangasht whose spiritual legacy she carried forward with panache. Jahaniyan Jahangasht literally means one who wanders worldwide. That was realistic too as he travelled widely and left a lasting impression on the South Asian Muslim Society. He implored people to follow Sunna (the prophet Muhammad’s way of life) in speech, conduct and action. To go on the Sufi path, he said, one must consume less meat, as that helped win over the man’s lower self. Prayer, he said, could change one’s destiny. Notably, he held the soil of Indian sub-continent in great esteem. The reason he gave was, that this soil had touched the feet of Adam. Grandfather’s ideology became Bibi’s command; she lived it fulsome.

Her tomb is an exquisite Islamic architecture

After Bibi Jawindi died in 1403,  Prince Dilshad of Iran got a tomb built in her memory in the year 1493. It could verily be the first love (esoteric love) mausoleum predating the better known Taj Mahal of Agra in India. The tomb of Bibi is located in Uch, Punjab, in the Islamic Republic of Pakistan. Uch was founded as Alexandria by Alexander the Great in 325 BCE. It was a vibrant centre of Sufism during the 13th century Mughal Empire in India. Apart from the tomb of Bibi Jawindi, Uch is also known for the mausoleums of other two Islamic saints – Baha’al-Halim and Jalaluddin Bukhari. Located in close proximity, tombs are masterpieces of Islamic architecture. 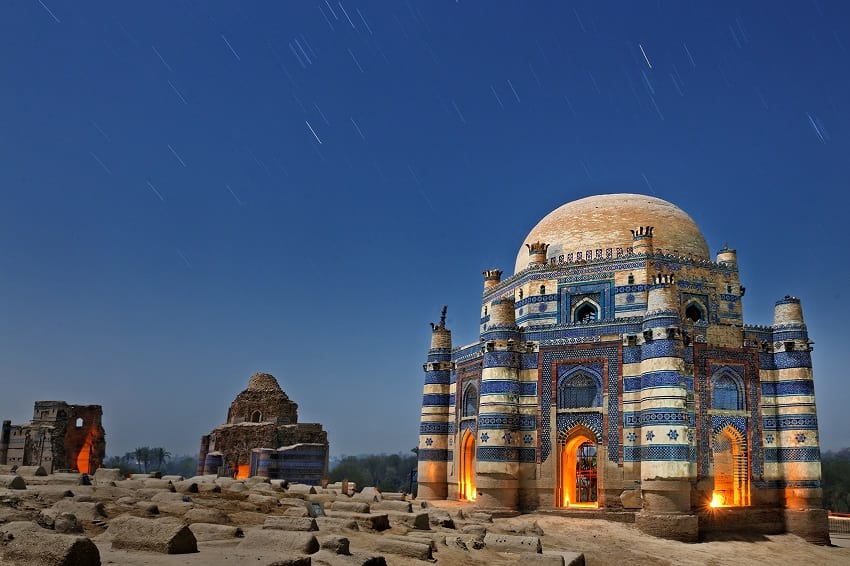 The tomb of Bibi is eight-sided on the exterior but circular in the interior. Their three tier structure is flush with glazed ceramic ware. The top tier carries a dome. Islamic scriptures mark both the interior as well as the exterior of the mausoleums. Eight tapering towers mark each of the 8 corners of the base tier. White and blue tiles in the shrines are a visual treat. A stretch of common graveyard surrounds these historical shrines of the Sufi divas. A close up photo of the tomb. (Usman.pg / Wikimedia Commons)

Tombs are in bad shape

The tombs have withered and disintegrated over time from the vagaries of nature. Repair works done till date are inadequate. Hence an appeal has been made to the world community for the conservation and upkeep of these illustrious monuments. 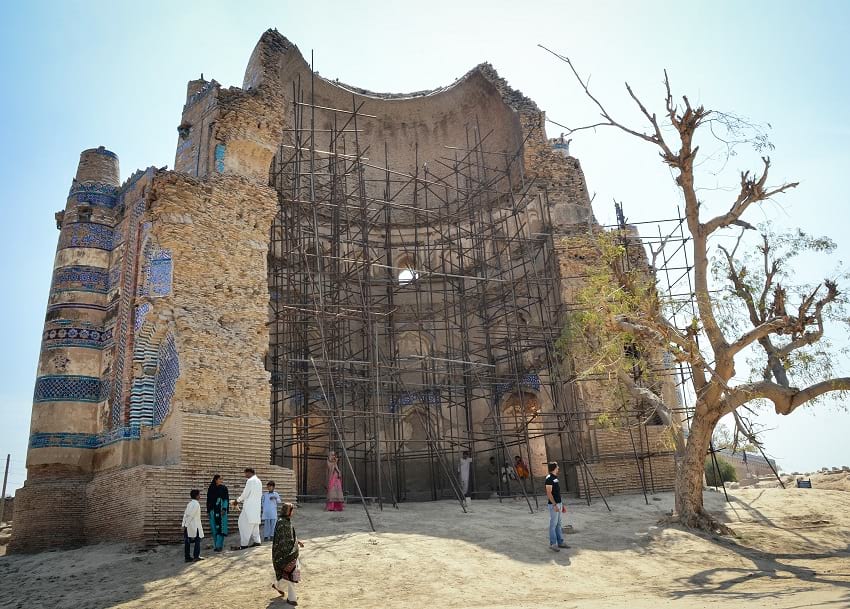 The backside of the tomb. (Kumail Hasan / Wikimedia Commons)

A small section of Sunni Population, Wahhabis denounce pilgrimage to shrines out-side-of Islamic faith. Professing to uphold puritan Islam, Wahhabis view such pilgrimage against the teachings of Mohammad. So averse are they to idol worship of any kind that they demolished the birthplaces of Prophet Mohammad, and his first wife Khadija. These places, they feared, could become shrines and objects of worship.

Is it possible that shrine of Bibi Jawindi – the diva of inclusive and all-embracing Islam, suffers neglect because of the ideological divide among the Muslims? Is the negligence a  reflection of a general disregard for the Sufi cult of Islam? The answer needs a sincere soul searching.

A Sunni Islamic fundamentalist movement, the Taliban, shouldn’t obliterate the memory of the woman Sufi Saint, Bibi Jawindi. The least that can be done in this direction is to restore her tomb to its pristine glory and spread her message into the public domain. It is hoped that tomb’s inclusion into the list of UNESCO world heritage sites would do this job.

Enjoyed this article? Also, check out “Naqsh-e Rustam: The Incredible Tombs and Rockface Reliefs of the Sassanian Kings“.

Previous Article
Mansa Musa: The ‘Golden’ Emperor of Mali Who Was Reputedly the Richest Man Ever
Next Article
Saudi Aramco, the World’s Most Profitable Company is a Flag-bearer of Women’s Empowerment & Sustainability