McBarge: The Floating Restaurant That McDonald’s Unveiled at the 1986 World Exposition 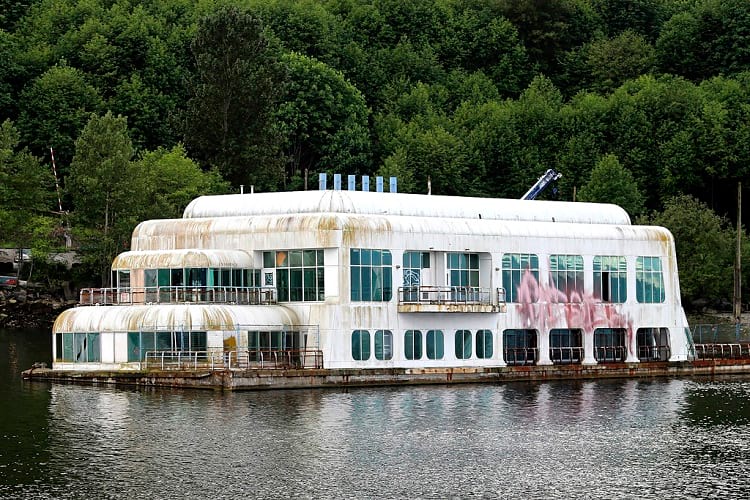 In their long history, McDonald’s had two floating restaurants, Riverboat McDonald in St Louis, USA, and Friendship 500 in Vancouver, Canada. They built the Friendship 500, popularly known as the McBarge, for the 1986 World Exposition on Transportation and Communication. The restaurant was on a 57-metre-long barge that McDonald’s moored in False Creek, which was alongside the exposition grounds. The McBarge was one of the five McDonald’s exhibits at the exposition, and they built it at the cost of $8 million. Robert Allan Ltd., one of Canada’s oldest consulting naval architectural firms, designed the floating restaurant. They built it as a showcase of future technology and architecture, which was the theme of the exposition. To construct the structure, they used porcelain-dipped aluminium panels, steel, and ferrocement on a pontoon barge.

Porcelain panels provide a very durable cladding whose colours and surfaces are more resistant to degradation in harsh environments. Ferrocement is a thin wall reinforced concrete which has low weight and a long lifetime. Pontoons are tubes that contain a lot of reserve buoyancy which enables the construction of large decks on floating vehicles such as flat-bottomed barges.

The McBarge measured 8,600 square feet on the main deck and 6,800 square feet on the top deck and could seat 1,400 people. In addition to creating a futuristic floating restaurant, McDonald’s wanted to create a bistro style place that was both elegant and affordable and would attract young people in droves.

The restaurant’s interior features included potted plants, wooden floors, merlot-coloured accents, and framed art. The hidden kitchen used a conveyor belt to deliver food to the serving counter. The glass panelled dining areas provided panoramic views of Vancouver, and the staff wore blue and white sailor’s uniforms. Millions of people visited the World Exposition between May and October, and the novelty of a floating restaurant ensured that the McBarge was always packed.

After the world exposition

McDonald’s intended to continue using the McBarge as a floating restaurant after the World Exposition ended, but for a variety of reasons, they were unable to do so. The staff left, and the empty barge remained moored where it had been during the Exposition.

In 1988, the Vancouver government sold the Exposition grounds to Lee Ka-Shing, a Hong Kong-based tycoon, and, in 1991, he told McDonald’s to remove the barge from his property. So, McDonald’s relocated the barge to Burrard Inlet, north of Vancouver.

Eight years later, in 1999, they sold the barge to Howard Meakin, a real estate developer famous for redeveloping Gastown, an old area of Vancouver. As Meakin did not wish to scrap the barge, it remained anchored in Burrard Inlet, neglected and rusting. It did briefly receive some publicity in 2003 when Marvel Entertainment and New Line Cinema used the barge as the lair of the Nightstalkers for the film Blade: Trinity. Around 2009, a few local people began a Save the McBarge Facebook group. The group grew to include thousands of members, and they discussed their opinions about what to do about the barge and shared photographs of the barge. Some of the suggestions they put forward were using the barge as a shelter for Vancouver’s homeless people, as part of a university campus, and, more commonly, for the purpose it was designed for, to be used as a restaurant and bar.

Howard Meakin paid no particular attention to the Facebook group since he had neither started it and nor had he solicited their advice. On the other hand, these Facebook discussions about the fate of the McBarge drew a lot of public attention to the barge and, as a result, a lot of people went to see it and trespassed on to the barge out of curiosity. Some of them vandalized the barge and drew graffiti on its walls. In the same year as the Facebook publicity, in 2009, Howard Meakin proposed the idea of making the barge the centrepiece of a waterfront development project on the Fraser River in the city of Mission. Besides restaurants and pubs, the project called “Sturgeon’s on the Fraser” included plans to build a marina and a seaplane terminal to service flights to Victoria and Nanaimo. Although Meakin’s proposal garnered some local support, the Mission city council rejected it citing environmental issues.

For the next 30 years, the barge remained in Burrard Inlet. Then, in 2015, Howard Meakin moved the now dirty and mouldy barge to Maple Ridge in the north-eastern section of Greater Vancouver. He planned on spending $4.5 million to renovate the barge, which would include removing the McDonald’s decor and giving the barge a new built look. He did not, however, give the public specific details about what he intended doing with the barge.

In 2017, Howard Meakin announced plans to use the McBarge as a deep-sea museum. Along with Phil Nuytten, an inventor and president of the Historical Diving Society of Canada, architect David Eaton, and designer Nigel Walker, Meakin spent more than a year working on the project.

To be named Deep Ocean Discovery Centre, the proposed 15,400 square foot museum was going to have a 4-D theatre and educational exhibits showcasing the history and importance of the Pacific Ocean, indigenous ocean technology and new developments, and stories and experiences of navigating the ocean. The museum would also display Nuytten’s vast collection of underwater equipment and other artefacts such as a shark cage.

As restoring and repurposing the McBarge would require a considerable sum of money, Meakin and Nuytten decided to get the Vancouver City Council involved in the project. They hoped that the City Council would give the barge a Historic Place Status. This designation would have made it easier for them to get funding from government grants and sponsorships. Their petition, however, did not receive the requisite number of signatures. They also planned to launch a crowdfunding campaign to raise some money, but they had to cancel the event in October due to bad weather. After 2017, there have been no further announcements regarding the project.

The McBarge, meanwhile, is still docked in Maple Ridge.