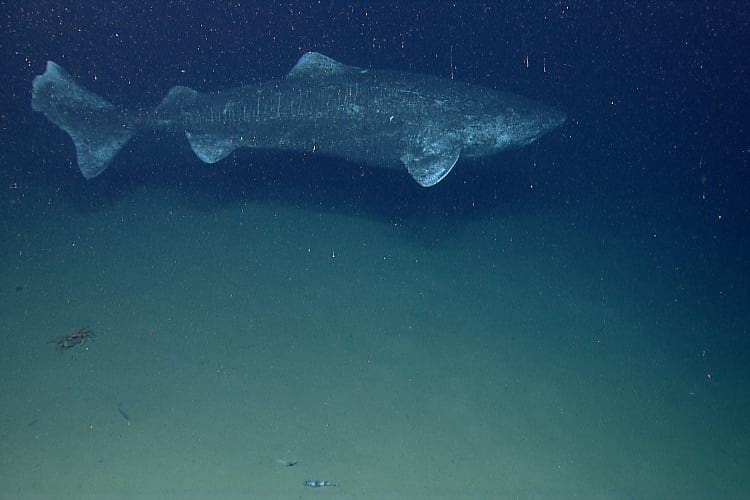 Greenland sharks, also known as sleeper sharks, grey sharks, or gurry sharks have suddenly gained popularity due to their age being discovered a few months ago. They belong to the family ‘Somniosidae’ and are primarily seen in the Arctic and North Pacific Ocean. They thrive in frigid temperatures and are known to migrate to the coldest areas of the water every season. They are the only known shark species that can survive in Arctic water temperatures all year round.

They also prefer deep areas of the sea as they are found at depths between 0 to 2,200 meters from the surface. Due to their huge size, the sharks swim very slowly and have a sluggish metabolism rate, earning them the nickname of sleeper shark. The longest they grow is up to 4 meters. Though currently unknown, if we were to guess we would say that sharks probably have a lifespan similar to our own – around 70 to 100 years.

How old is the Greenland Shark?

Researchers knew for a long time that these sharks were very old, but were unable to figure out the exact age. For certain species of fish, scientists can examine ear bones that have patterns of concentric rings around them. These rings can be counted like the rings in a tree to determine age.

Another method is to use calcified tissue on backbones of fishes like the Great White (Shark). Finally, if none of these methods is viable, scientists count growth rings on the fin spines and vertebrae. Unfortunately, Greenland sharks are extremely soft and have no hard body parts for any tissue deposition. For the longest time researchers were perplexed by the question of estimating the shark’s age.

Concurrently, a physicist by the name of Jan Heinemeier was conducting a research of his own. He figured that there was a way to age animals by the proteins found in the tissue of their eye lens. This protein is very stable and unlike regular protein doesn’t go through any kind of replenishment through the lifetime of an animal. They are present and encased within the eye since birth. He noted that this method would prove extremely useful in the field of forensics but was unaware of researchers’ conundrum surrounding the shark’s age. Heinemeier also helped crack a murder mystery in Germany using results from his study.

Eventually, Heinemeier was contacted by researchers John Steffensen and Julius Nielsen who were already working on figuring out the shark’s age. They collected eye lenses of 28 sharks over a period of 5 years that were caught unintentionally while catching other target fishes. They procured authorization from the Government of Greenland to conduct the research and immediately euthanized sharks after they were caught so as to reduce the pain of death.

These sharks have a unique eye structure wherein the lens keeps growing as the fish grows. Layers of tissue keep getting added to the lens; while scientists can’t count these layers as they would tree rings, they can keep scraping the layers to get to the centre of the lens. Scientists study this eye lens nucleus to estimate the age of the fish.

They concluded that the youngest of these sharks had been alive for at least 272 years or as high as 512 years. While this method isn’t very accurate it does give you a broad range to work with. With a margin of error of 120 years, they concluded that she is probably 400 years old. Even considering just the minimum, she’s still the oldest known vertebrate on Earth. Greenland sharks grow only 1 cm a year and can grow up to 6 meters in length. Given their slow rate of growth they only reach sexual maturity when they are more than 4 meters long, which happens at about 150 years of age.

The reason they live so long is that they grow slowly. They live in waters just a little above freezing which makes their tissues cold. Cold tissues slow down the chemical reactions within the fish including metabolic rates. If the fish’s metabolic rate is lower, their ageing process is slowed down too.

What’s next for the sharks?

While their extreme longevity may be fascinating to some, it is a cause of concern for environmental biologists. They are listed as a near-threatened species of shark. Because they only mature every 150 years, (and) their rate of reproduction is quite slow. However, they are caught by humans at a much faster rate. Since the early 20th century, at least 30,000 were hunted for their liver oil.

People of Iceland still hunt the fish for its meat where it’s being used in Hákari production. Hákari is a traditional Icelandic dish made of fermented fish. By itself, the shark meat is fatal to humans due to high amounts of trimethylamine oxide (TMAO) present in its tissue. TMAO helps sharks survive the frigid water temperatures. It affects humans in a way that is similar to extreme intoxication. The meat is, therefore, dried and then fermented to drain out the poisonous fluids present in its tissue to make it safe for humans. Not all of the hunting is intentional though, a huge amount of sharks are also caught in nets as bycatch while looking for other fish. This is how the researchers were able to study the sharks’ age without causing any more deaths. Global warming is also another cause of concern for the fish. Since they thrive particularly in colder regions like near the Arctic, we need to protect the environment so that it doesn’t become any warmer than it already has. As the environment becomes warmer, the water temperature rises which would make the waters unbearable for the fish.

To preserve the longevity of the shark, we should learn ways to conserve our endangered species and be more aware and critical of actions that cause global warming.

Enjoyed this article? Also, check out “Goblin Shark: The Alien Shark of the Deep Sea, with a Slingshot Mouth“.

Previous Article
Bonnie and Clyde: The Infamous Criminal Duo That Terrorised the Midwest in the 1900s
Next Article
Horrors of 1971 Bangladesh Genocide Chronicled by Anam Zakaria Through a More Personal Lens