Armoured Vehicle-Launched Bridge: A Bridge Over Troubled Water and a Real Life Transformers War has always been a lucrative business and now so more than ever. Weapons and vehicles designed for combat are among the mass manufactured items which are sold to the highest bidder. Knowing the spoils of war, these top bidders will pay an extortionate amount which is why vehicles like the AVLB (Armoured Vehicle-Launched Bridge) have been constructed and sought after.

When one thinks of a vehicle of war, ones boasting rockets and guns will automatically come to mind but the fact is that war requires brain as well as brawn, even more so during modern warfare. The AVLB vehicle follows this trend in supporting combat vehicles rather than entering combat itself. If ever an obstacle appears for example in the form of a canyon, river or trench it can create a literal bridge to the other side. It has the main body of a tank along with tank tracks underneath however the top section which is usually the weapons turret has been converted.

AVLBs are not a modern mechanism; their histories are rooted to almost a century ago during World War One when modern tank warfare was first implemented. It was common for battlegrounds to be in forest and farm regions, many of which would turn to trench fighting as the battlefield would turn to mud amidst constant bombardments and treacherous weather conditions.

An example is the Battle of the Somme in northern France during 1915, the first battle where modern tanks were used en masse. Tanks were designed to navigate harsh terrain in which would usually be a problem for some vehicles but still at times they would get held up, often via defensive tactics from the enemy. These early tanks would have implements called Fascines to help them overcome such territory – a series of wooden rods which could be rolled ahead to improve navigation. It was around this time that tanks began to carry bridges however with the technology still in its infancy the Fascines remained the preferred and trusted method.

By World War Two industrial advances meant even more tank production and upgrades were possible. The need for a bridge to secure crossings was also heightened with the war stretching across Europe and even into Asia and the deserts of Africa. One such tank became a frontrunner of bridge laying technology – the Cruiser Tank Mark V – commonly known as the Covenanter (after a religious sect) was employed into active service but had been at the training center since 1919.

The Covenanter series became a popular choice for the British Army despite early design flaws such as overheating. The first Covenanter Bridgelayer could roll to thirty feet and support 30 tons by 1944. Other creations including using the American Sherman tank body and the British Churchill chassis.

On the side of the Axis, a Germany AVLB had the chassis of the famous Panzer series. It was named Bruckenlegen IV but was not deemed very effective by high command after it entered the war in 1940. This was during the tactics of Blitzkrieg, a tactic of rushing through your opponent’s territory which made success in battle ever tougher for heavy armour vehicles. 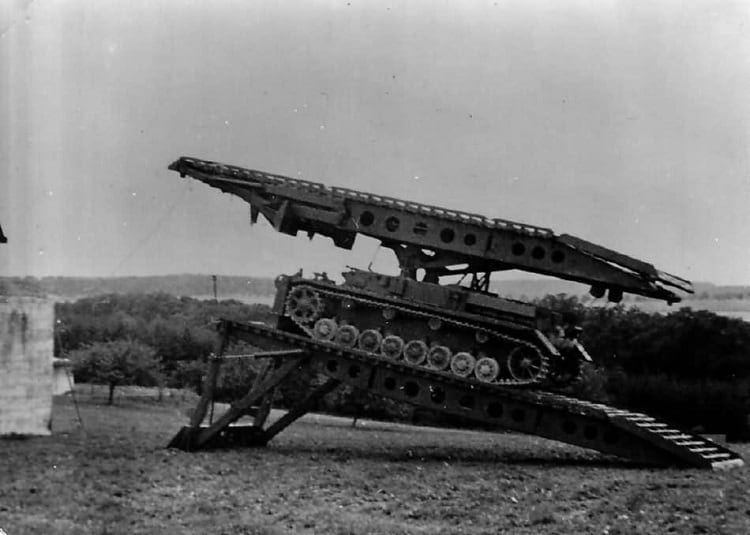 Into more modern warfare the activity of the US army is well documented in the Gulf region. A popular AVLB is the M60 AVLB based on the M60 Patton Tank chassis. First deployed in 1987 and now designed in Alabama at the Anniston Army Depot, there are now around 400 of them in various parts of the globe used in both the Gulf and Iraq war. It has a bridge capacity of 60 feet deployed in a scissor formation. The bridge can be assembled in a matter of minutes and is even able to cross the bridge itself before reattaching. It is 13,000 KG and made mostly of aluminium.

The M104 Wolverine is now replacing the M60. Its bridge can reach 5 meters more and sets itself horizontally meaning it is better suited for covert operations. It can also support vehicles as heavy as 70 tons. While maybe not the first item a war general would have on his shopping list, the importance of the Bridge laying device has certainly been shown. Many countries now have these vehicles in service showing their importance to battle and to various types of war campaigns. Famous examples include the SPRAT in France, the MT55, a Slovakian built vehicle manufacturing for armies within the Warsaw Pact like the Russian Federation. Also, the amphibious SYHK or ‘Samur’ which is Turkish for weasel.

Enjoyed this article? Also, check out “Mine Flail: Triggering Mines to Ensure Safety“.

Previous Article
The Unknown Fate of Einstein’s Stolen Brain
Next Article
The Dvorak Technique: The System to Estimate the Intensity of Tropical Cyclones