American Dream Limo: A Long, Luxury Car That Was Once a Rare Sight to Behold Long ago, when automobiles took to the roads on a commercial basis, they not only made it easier for people to travel from one place to another but it was also a less tiring and more time-saving process. Automobiles became the order of the day and car manufacturers began toying with the idea of bringing changes in the size, shape, design and pattern of the vehicles for more public appeal. Among all the other vehicles that the world had seen, none was as long as the “American Dream”, which was the longest car in the world at one point of time.

Illinois-born Jay Ohrberg, who worked as a truck driver back in the 70’s, was once assigned the task of transporting show cars around North America and Canada for the then five-time American racing champion Craig Breedlove. Jay found out that there was a different set of audience that was in awe of speed cars and had a deep sense of veneration for such vehicles. That fuelled his imagination and gave him the idea of coming up with peculiar designs for building his own show cars. Soon enough he started designing automobiles that were not only strange-looking but were built from things that people would see in their vicinity in their daily lives. His unique car designs were much appreciated by the public, and they brought in the kind of money Jay was looking for, to keep on funding his own designs and custom-making more modified cars and odder-looking designer vehicles.

His stylish cars started to get noticed and eventually Hollywood happened to Jay Ohrberg at the right time. Initially taking it up as a hobby, designing cars for well-known Hollywood production houses became Jay’s passion. The car designer now turned car collector, shifted base to Las Vegas, where he currently owns a shop that deals in such custom-built vehicles. Ohrberg designed a number of automobiles for many popular Hollywood movies and television shows and that prompted him to build a luxury limousine back in the late 80s that would not only go on to stun the world but would also be one of the most unique cars to ever roll.

Specifications of the American Dream

Measuring a whopping one hundred feet in length, the American Dream limo or limousine was built by extensively modifying a golden coloured 1970’s Cadillac Eldorado model, to which more parts were added later on. Ohrberg and his team worked on the sedan by removing its rear seats and working their way by patching up the vehicle with another Cadillac model and joining the two together. Adding twenty-four more wheels, along with its original two front wheels (six in front, eight in the middle and ten at the back), the sedan turned into a 100-feet-long limousine from bumper to bumper. It had seventy-two seats and a host of amenities inside it to boast of. It ran on two motors and had to be driven by two drivers, who had two cabins of their own, one in front and one at the back. 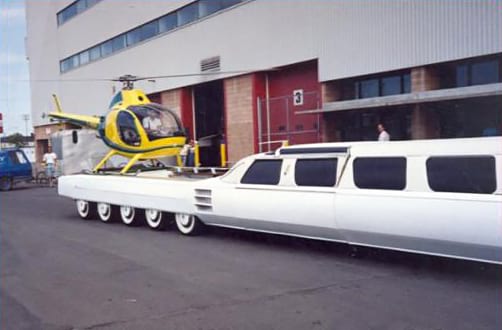 The helipad on the limousine. (Courtesy: Jay Ohrberg)

When the American Dream limo was complete in the year 1992, it was truly extravagant on the inside. There was a hot tub inside the ultra-luxury car, a putting green (a small part of a golf course), a tanning bed, a plush living room, a Jacuzzi, a swimming pool complete with a diving board, a king-sized water bed, a sun deck, a satellite dish on top and even its own helipad on the backside. A midway detachable panel helped the limousine to be loaded on trailers in two parts in case it needed to be transported from one place to another. The limousine detached into two parts for being moved. (Courtesy: Jay Ohrberg)

Drawbacks of the American Dream limousine

The comfort car was so long that it could only be driven on a straight path. Owing to its length and its sheer size, it could not negotiate a turn on either side and that is where the two drivers came into picture. It was designed to be detachable in the midsection so that the driver in the back could reverse the vehicle when there was a need for it. Although the car was a limousine, which wasn’t a rare sight in the US, mostly in uptown Hollywood, the American Dream was illegal on the road and did not have permission to be driven publically. It ended up getting leased to a company, which further used the car for promotional purposes.

Last days of the American Dream

After the lease of the luxury limousine ended, it was abandoned in a New Jersey warehouse, where it kept wasting away in solitude in a parking lot. Its body had damaged greatly, windows had been broken, its wheels went missing, its parts had become rusty and moreover, there was no way the car, which once was a rare sight, could be brought back from the brink. Although auctions were held in 2012 to give the car a second chance at life, nothing worthwhile came up due to the damage it had suffered, until two years later when help arrived. In the year 2014, Autoseum Automotive Teaching Museum in New York acquired the American Dream limo, which would help to teach students to build and fix cars that are in such dire conditions. While Jay Ohrberg continues to custom-make and design luxury cars and vehicles for movies and put them on display in his museum, there was no way he could save the one piece of his artwork for the world to see. With plans for an even longer limousine, it is still time to see if it actually materializes. The American Dream had a dream run while it was in working condition on the roads, which earned the vehicle a place in the prestigious Guinness Book of World Records. Until Jay Ohrberg designs the longer one as promised, the American Dream limousine will continue to be remembered as the longest car in the world.

Enjoyed this article? Also, check out “Armoured Vehicle-Launched Bridge: A Bridge Over Troubled Water and a Real-Life Transformers“.

Special thanks to Jay Ohrberg for permitting us to use the photos of American Dream limousine.

Previous Article
Byblos, Lebanon: A World Heritage Site and the Oldest Continuously Inhabited City in the World
Next Article
The Rise and Fall of the Victorian Era Creepy Therapeutic Treatment Called Electric Bath