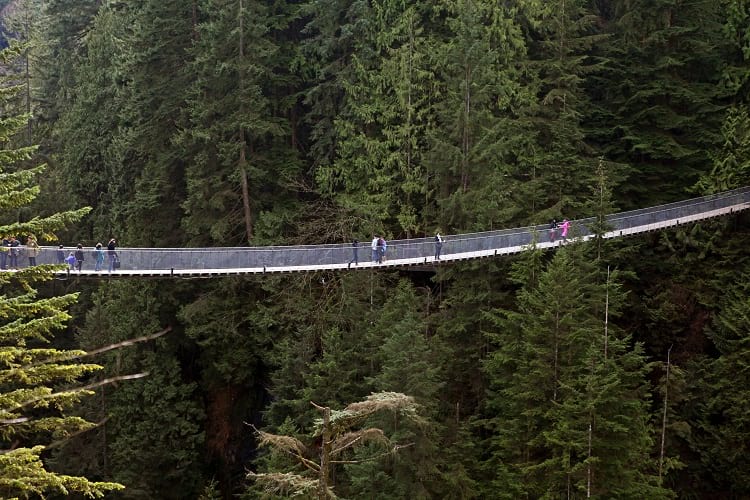 In British Columbia, Canada, there is a 140 metres long bridge, suspended 70 metres above the Capilano River known as the Capilano Suspension Bridge. Built in 1889, this private facility charges an admission fee and catches the fancy of over 8 lakh visitors every year.

Presently, it has become a hotspot for tourists with adventure sports, walkways along the river, footbridges constructed for a better view of the valley and the recently opened sit down restaurant paying homage to the history of the place.

The construction of the Capilano Suspension Bridge

In the year 1888, a civil engineer and land developer of Scottish descent, by the name of George Grant Mackay bought 6,000 acres of forest land on both sides of the Capilano River and designed 25 acres of the land for his personal use as a summer home.

He built a cabin on the edge of the valley and decided to construct a walkway from one side of the river to his property on the other side. He consulted a Native Indian and the Squamish Chief, August Jack (Khatsahlano, Xats’alanexw), a logger who built canoes, totem poles etc. in the area.

In 1889, with the help of Jack and his brother Willie, a footbridge was constructed from hemp rope and cedar planks to cover the breadth of the canyon above the river. Jack used his horses to swim through the river and secure the ropes of the footbridge on the other side with enormous buried cedar logs. It was often referred to as the ‘Laughing Bridge’ due to the sound it emitted on a windy day.

Though Mackay had no intention of making it a tourist attraction, nonetheless, people were soon drawn to the fascinating suspended bridge. The adventurous ones, who made it to the other side, ended up ‘tramping’ around Mackay’s cabin, giving rise to the popular term, ‘Capilano Tramps’. Disturbed by this constant trespassing, Mackay sold it to Bruno Stelzer in 1892.

The start of the oldest tourist attraction

Bruno immediately realised the commercial potential of the place and started charging visitors 10 cents, which makes the bridge the oldest tourist destination in Vancouver. In 1903, Bruno asked engineer Harry Burgess to draw plans to replace the rope footbridge with wire cables. Finally, W.T. Farrell was given the contract to construct a sturdy bridge strong enough to support a strain of 60 tonnes.

Irishman Edward Mahon came to Vancouver in 1888 and started his mining business. In 1910, he fell in love with his deceased friend’s 19-year-old-daughter, Lilette. In order to be able to woo her, he decided to put Lilette’s mother Elizabeth in charge of his recently purchased Capilano Bridge property. He married Lilette the next year and also built the Tea House at the bridge property in a constant endeavour to improve its commercial value. He also refurbished the bridge with more cables in 1914. Elizabeth, in the meantime, had met a forest ranger, much younger in years to her, ‘Mac’ Archibald Dunerick MacEachran, and the two had fallen in love. They got married in 1921 and Mac started actively promoting the property to visitors. In 1934, Mac decided to reveal to Elizabeth the existence of his 19-year-old-daughter, Irene, whom he now wished to call to Capilano to stay with them. Constructions were underway for a new, bigger house across the street from the bridge, when, unfortunately, Elizabeth passed away in 1934, a year before Mac bought the property from Mahon. The new house today has become the Bridge House Restaurant.

As a part of his promotional activities, Mac started inviting the local Native Indians to place their totem poles in the park displaying their art, adding a native theme to it. The Capilano Park till today is known to contain the largest private collection of Story Telling Poles that have ever existed, with varied styles of pole carving.

Mac finally sold the property to Henri Louis Isidore Aubeneau in 1945 and went away to settle down in California. Though Henri and his wife, Marie Moran bought the property and operated it as a tourist attraction, they refrained from making any major alterations to it. The Capilano Suspension Bridge Park again changed hands, when Henri sold it to Douglas McRae ‘Rae’ Mitchell in 1953.

The Rae and Nancy entrepreneurship

Unsure of the strength of a bridge so old, Rae completely replaced it in 1956 with a new sturdier bridge constructed in only 5 days. Designed by an engineer, Art Williams, the bridge was held together by steel cables held down on each side by 13 tonnes of concrete. The new bridge designed with the strength to hold over 1300 people, was tied to the old one using a pulley system across the huge gap. Rae developed trails along the bridge and converted the teahouse into a gift shop. The current owner, Nancy Stibbard bought off the Capilano Suspension Bridge from her father Rae, in 1983, with the goal to promote tourism in the area. She turned it into a tourist destination adding nature walks, performances by Native Indians, a series of trails like the Treetop Adventures and Cliff Walk.

Over the years, the popularity of the bridge has grown tremendously resulting in Nancy’s induction into the Canadian Tourism Hall of Fame at the turn of the century in 2000.

The most recent addition to the property is the Cliff House Restaurant in March 2018, the design of which is a tribute to the house of the original owner, George Grant Mackay.

Nancy’s son, John has joined the Capilano business and today the park boasts of over 2000 visitors in a day. The Story Centre in the park has archives from the past in terms of photographs, antiques and murals that have been specially put together to tell tales of the past. Under the ownership of Nancy Stibbard, the Capilano Suspension Bridge Park has become a hot-spot tourist destination with nature walks at breathtaking heights.

It is also home to one of the tallest living Christmas trees, the 152 feet tall Douglas fir. During the holiday season, in December, the entire valley below the bridge transforms into an enchanted forest with thousands of glittering lights around the Douglas fir and throughout the valley.

Enjoyed this article? Also, check out “Golden Bridge: The Connect to the Past and the Future of Vietnam“.