Zoroastrianism: The Oldest Monotheistic Faith is Now on the Verge of Extinction 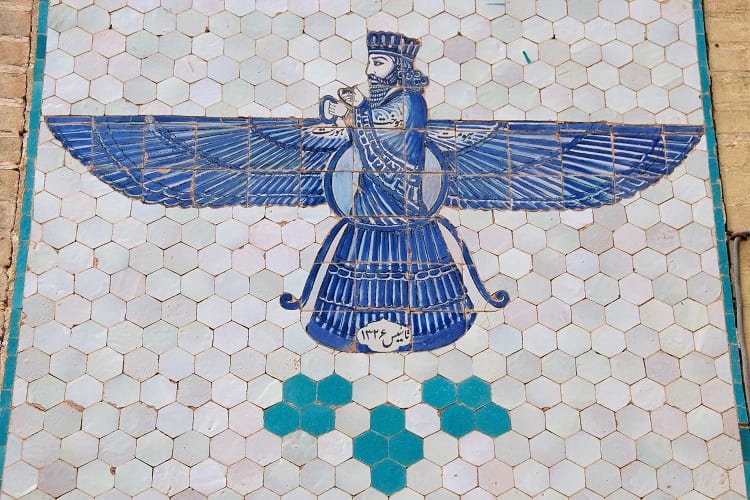 One of the oldest religions in the world, Zoroastrianism has its roots in ancient Persia almost 4000 years ago. It had been the state religion in Persia over three dynasties. However, the Muslim Conquest of the region in the 7th Century AD practically wiped out the faith. Refugees fled to India to escape the persecution. The Zoroastrians today exist as a minority religion in pockets of India and Iran. The oldest monotheistic faith in the world has only about 100,000 to 200,000 practitioners today.

The name of the religion comes from its founder, Prophet Zarathustra (or Anglicized, Zoroaster). Not much is known about exactly when the Prophet lived. Whatever little is known about his life comes from the collection of Zoroastrian religious scriptures, the Avesta.

Archaeological evidence suggests that Prophet Zoroaster lived sometime between 1500 and 1200 BC. However, some specialists are of the opinion he lived in 6th Century BC as a contemporary of the Persian emperor Cyrus the Great. He was born in a tribe following an ancient polytheistic religion (similar to Hinduism) in north-eastern Iran or south-western Afghanistan. At the age of 30, while engaged in a purification rite, the Prophet had a divine vision. Soon after, Zoroaster began to preach of a single almighty, Ahura Mazda, and thus the Zoroastrian faith was founded.

The remains of a fire temple dating back to 2nd Century BC were discovered in Gonur Tepe, Turkmenistan. This indicates Zoroastrianism was already a well-established religion by this era.

The Muslim Conquest in the 7th Century AD caused the fall of the Sassanian Persian Empire. The Zoroastrians living in Persia were forced to pay a religious tax to their invaders, simply to continue practising their faith. Additional laws were enforced as well, to further oppress them. Eventually, most of them fled to India as refugees. The few who remained converted to Islam. In pockets of Iran, one can still find native Iranian Zoroastrians, but their numbers are few and far between. 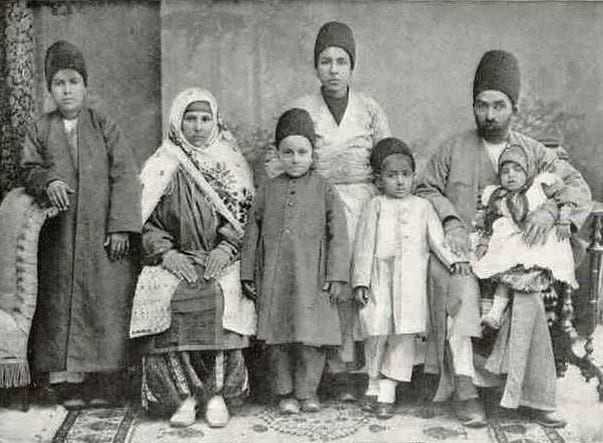 A Zoroastrian family in Iran, 1910. (The National Geographic Magazine)

The Parsis of India

The Iranian Zoroastrians who immigrated to India to escape oppression by their Arab overlords came to be known as the ‘Parsi’. Likely, the refugees had sailed across the Arabian Sea to reach Gujarat in western India, sometime around 785-936 AD. The majority of the Parsi community can still be found around this region. They have, over the years, dispersed across India and Pakistan. However, the Parsi still remain an ethnic minority- numbering to only 60,000 in India, and 1,400 in Pakistan. 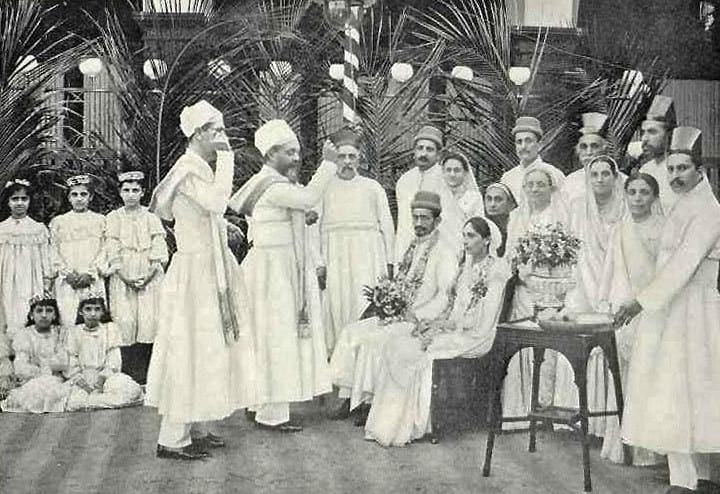 The chief symbol of Zoroastrianism is fire. It is the holiest element within the religion, and their places of worship are often referred to as fire temples. Every fire temple houses an ‘eternal flame’ on its altar, which burns continuously without extinguishing. The three ancient fire temples, known as the Great Fires, were said to have come directly from Ahura Mazda himself. The Great Fires are the stuff of legends, and despite relentless research, no trace of these temples has been found yet by archaeologists. Apart from fire, the Zoroastrians also consider water to be a sacred element, both being symbols of purity. 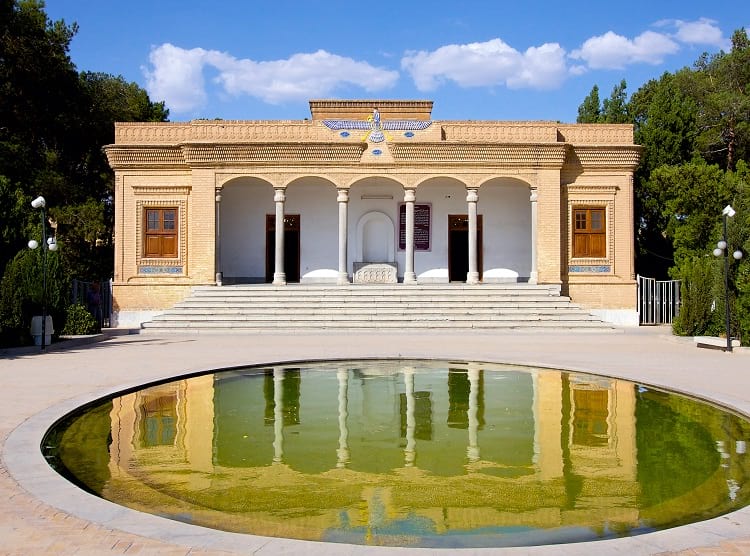 The Zoroastrian custom of ‘sky burials’ is unique amongst funeral traditions across the world. Tower of Silence, or Dakhmas, are high, circular, flat-topped towers where the corpses of the dead are traditionally kept. Here they are exposed to the elements- vultures pick the bones clean and the sun bleaches the remains. The bones are then collected and placed inside ossuaries within lime pits. Though sky burials are still practised by some Parsis in India, most Zoroastrians today prefer to bury their dead beneath concrete slabs. In Iran, Dakhmas have been declared illegal since the 1970s. The last functional Tower of Silence is near Mumbai, in India.

For further read: Tower of Silence: Where Zoroastrians Leave their Dead to be Excarnated by Scavenging Birds

The traditional garb of the ancient Zoroastrians differs a great deal from the modern Parsi costume. The attire of the Parsi community is a blend of their middle-eastern roots and the garb of the Gujarati community they immigrated into. A traditional Parsi costume for a male would consist a long muslin shirt (sudra) and loose cotton trousers. He would also wear a girdle (kusti), a China-silk skull-cap, and a waistcoat made of white cotton or chintz. An angrakha, an unbelted long loose coat, is put on when heading out. A decorated brown turban is also put on top of the skull-cap when outdoors. The Parsi woman has adopted the saree as their garment of choice. A fascination for ornaments and vibrant tasteful clothing characterises the Parsi woman’s appearance. 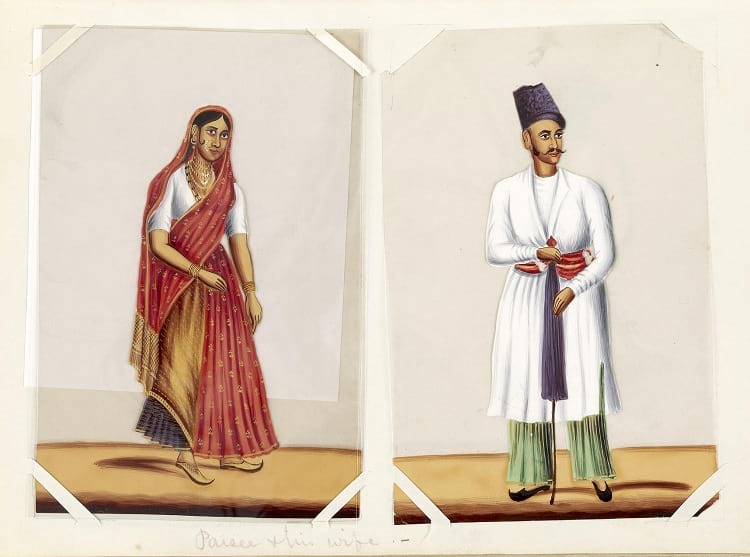 The traditional Parsi food today is a blend of Iranian and Gujarati flavours, resulting in a sumptuous and unique cuisine. A Parsi lunch on a regular day would include rice, with lentils or a coconut-infused curry. Typical dinners include a meat dish, generally accompanied by potato or vegetable curries. A slightly pungent onion-cucumber salad, kachumbar, usually accompanies these daily meals. Popular dishes include minced lamb in rich tomato gravy, half-fried eggs, and a signature thick mutton stew alongside caramelised rice. The signature alcohol of the Parsi community, though typically drunk by the agrarian communities of old, is toddy made from coconut. The plain but delicious bun maska (bread and butter) with chai is a staple in Parsi cafes along the west coast of India, especially Mumbai. Chicken Farcha and Dhansak are other mouth-watering and delicious traditional Zoroastrian dishes.

Parsis minority makes up a sizeable chunk of the influential industrial families in India, including the Tata, Godrej, and Wadia families. One of the most famous practising Zoroastrians in the modern world is Freddie Mercury, the lead singer of the legendary British rock band, Queen. Freddie Mercury was born Farrokh Bulsara, and of Parsi descent. A practising Zoroastrian, Mercury’s funeral was conducted by a Zoroastrian priest in London.

The presence of Zoroastrianism in the western hemisphere is negligible. In fact, most Europeans became aware of the Zoroastrian faith only after reading philosopher Friedrich Nietzsche’s novel Thus Spoke Zarathustra in the 19th Century. In the novel, Nietzsche ‘follows’ the Prophet Zoroaster on his travels. A professed atheist, Nietzsche’s work has been regarded as ‘ironic’ due to its religious preoccupation.

In today’s age of post-globalization, practically everything can find a place in pop culture, and anything can serve as inspiration. Religion is not an exception. The Japanese automaker Mazda Motor Corporations derives its name from Ahura Mazda, the supreme ‘God of Light’. The Azor Ahai legend in George R. R. Martin’s high-fantasy series A Song of Ice and Fire, and TV-adaptation Game of Thrones is also inspired. The fire god R’hllor might have been modelled on Ahura Mazda. The warrior demigod Azor Ahai who ‘defeats darkness’ has a resemblance to Zoroastrian legends as well.

Apart from their immigrant origins, the primary reason for the low and steadily-depleting numbers of the Zoroastrian community is their exclusivity. The fire temples are strictly out of bounds to outsiders. The community does not permit conversion into their religion. Neither do they accommodate children borne out of intermarriages with other communities, within their folds. As a result, the number of recognised practitioners of Zoroastrianism is steadily decreasing. Their numbers in India itself have halved since the 1940s. The government has launched public campaigns and has been funding fertility clinics to help the Parsi community in India to procreate, and grow. Zoroastrians across the world have a rich and distinctive cultural heritage, which must be preserved and allowed to thrive.

Previous Article
Hyderabad State: When Nizams Held Control of an Indian Kingdom During Its Golden Period
Next Article
Phantom Island: The Islands that Might Have Existed Only in the Imagination