Zinnia, The Prodigal Flower of Bonhomie Between Life in Space and Life on Earth 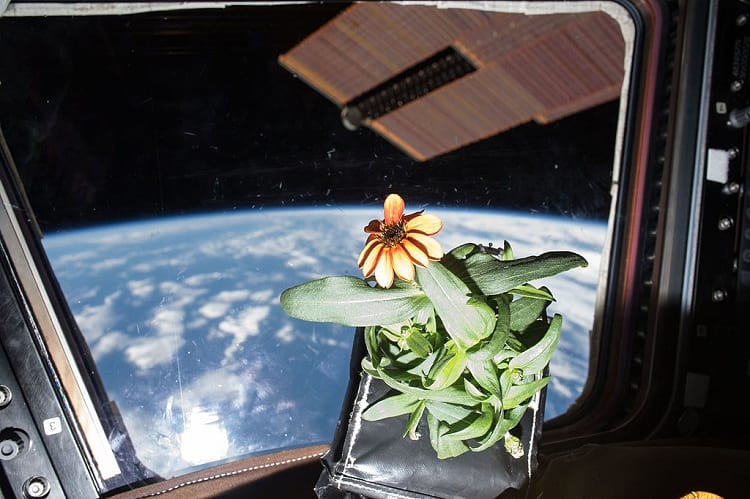 Space outside of Earth’s gravitational field has been explored so intensively and extensively that now the next logical step is human habitation in space. That obviously can’t happen without plants; which are required fresh food, visual euphoria and life-sustaining oxygen pool in the environment. The International Space station (ISS) was launched in orbit in 1998 by National Aeronautic and Space Administration (NASA), USA for space exploration, scientific discovery and aeronautics research.

Soviet Salyut 7 space station, 1982, conducted the first successful experiment in growing plants in space up to flowering and was successful in harvesting next-gen seeds from seeds grown in space. By 2003 the Russian Cosmonauts were not only experimenting on space crops but also consuming them as food. Allan H Brown, had already proved in 1983 that growth in plants/seeds was innately controlled, not environmentally influenced/dictated.

Establishment of Vegetable Production System (Veggie) by ISS in 2012 was a milestone development. Veggie unit is a container with in-built mechanisms, plant pillows, to guide plant growth. Plant Pillows include bags of manure, dirt, nutrients and a water absorbing wick. Seeds are glued to wick in a way their roots grow towards the bottom of the bag and the stem upwards. LED lights above the arrangement provide energy for plant growth and the growing leaves are cushioned by the flexible and expandable walls of Veggie. This system has focussed on salad vegetables like lettuce, Swiss chard, radishes, Chinese cabbage and peas which could be easily plucked and eaten as-such by the Cosmonauts. 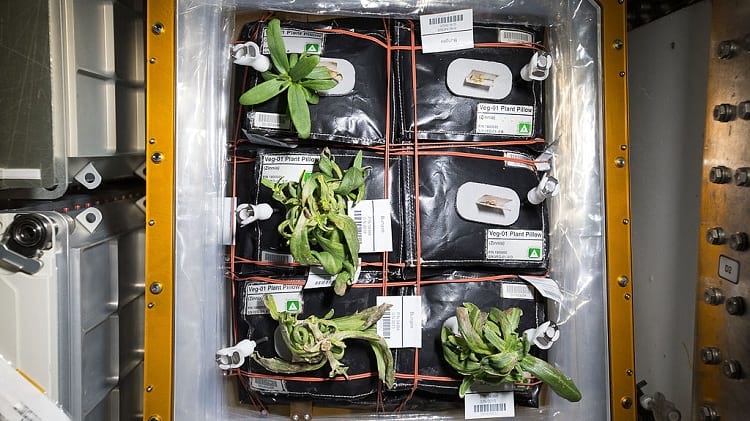 On August 10th 2015, American Astronauts ate their self-grown Red Romaine Lettuce. Blooming of sunflower in 2012, and Zinnia in 2016 were landmark achievements. Zinnia’s success was significant as it paved way for long-duration and fruit-bearing crops like tomatoes, peppers, strawberries, beans and peanuts. Growth duration of 60-80 days and upscale sensitivity to the environment made space cultivation of Zinnia extremely challenging. Just 2 weeks into their growth, zinnias showed curling of leaves and droplets of water on leaf margins; typical stress symptoms. High-speed fans were used to control humidity that caused mold outbreak. Dedicated efforts of the crew, Scott Kally in particular, bailed plants out of the problem creating a milestone in space agricultural technology.

Formation and orientation of plants in zero gravity situation was an interesting observation. Skewing root growth hypothesis of Charles Darwin held that gravity and environment decided plant growth on earth. With seeds showing skewing growth patterns in space as well, Darwin’s hypothesis was disproved. Studies finally concluded that plants changed their gene expression in the no-gravity situation. It is like plants can sense departure in their environment and adjust accordingly.

An extra-terrestrial environment can stress plants in many ways. Apart from temperature, light and available nutrients, plants are impacted by changes in gravity, radiations and gaseous exchange. These factors trigger reprogramming of gene expression to adjust to the hostile environment. An understanding of this genetic programming, courtesy Biological research in Canister (BRIC) is a giant step towards space agriculture as well as the life on earth.

How are earthlings benefiting from the research?

A related program of ISS, Lada Validating Vegetable Production Unit – Plants, Protocols, Procedures and requirements uses a chamber, like a greenhouse, with auto control for water and light. It is an on-earth research lab for assessing food value of space crops, identifying and controlling microorganisms that harm these crops, sanitization of crop produce post-harvest and optimization of plant production in space conditions. Interestingly research applies as well to life on earth as on space.

Air purification technology designed primarily for space stations is also being used to keep air in household clean and healthy. A leaf sensor developed for long-duration space missions is being used by farmers to conserve water, as it indicates the right time when plants are `thirsty’. A common problem both on earth and space is ethylene, a gas emanating from plants which speeds up the ripening of fruits and vegetables. Hastened ripening leads to faster decay. The solution lays in neutralizing ethylene and came by way of ethylene scrubbing technology.

But technology did much more than just destroy ethylene. It simultaneously destroyed many airborne bacteria, fungi, molds, mycotoxins, viruses and undesirable odours. Now, these scrubbers are being used widely in food preservation and processing plants, wineries, restaurants, refrigerators, and deodorants. Doubtless, research at NASA is not just for space exploration. Its importance for life and business on earth is as sanguine. Robotic surgery is a gift of space research. So also telemedicine and medical intervention through remote control.

Can breathe analysis be a way to detect dormant/insidious disease processes?

Yes, thanks to the technique of calibrating Nitric Oxide in air exhaled by Astronauts. Men in space and elderly on earth, both suffer from weakening of bones. Use of bisphosphonate, low sodium diet and exercise has proved useful for both. The study of plasma (charged gases which can permeate matter quickly and even spread evenly) has proved as effective in medical treatment as in plant growth. Studies on microgravity have given important leads for treatment of immunosuppression.

Development of microencapsulation for targeted treatment of cancerous growth and dry immersion technology for early diagnosis of neurological disorders, oedema, sports medicine and rehabilitation of premature babies are all thanks to space research. Study of cardiovascular system on space flight has guided us on how to examine health parameters of motor vehicle drivers and civil aviation pilots. Studies on motor disturbances in zero gravity is being used to treat patients with cerebral palsy, stroke, spinal cord injury and age-related motor disturbances.

With plants as company on the space mission, it is safe to assume that crew would feel more comfortable in staying for months, even years and wouldn’t tax their physical and mental health as is likely without such company. Space research in the meanwhile is extending a yeoman service to humankind, even before the dream of colonising space for human dwelling becomes a reality.

Enjoyed this article? Also, check out “Space Food: What Do Astronauts Eat Outside the Earth’s Atmosphere?“.

Previous Article
Path to Blood and Insanity: Uncovering the Mystery of the Hope Diamond
Next Article
Seppuku: The Japanese Suicide Ritual, Where Death is Better Than Disgrace