Varosha: The Abandoned Luxury Retreat in the Mediterranean 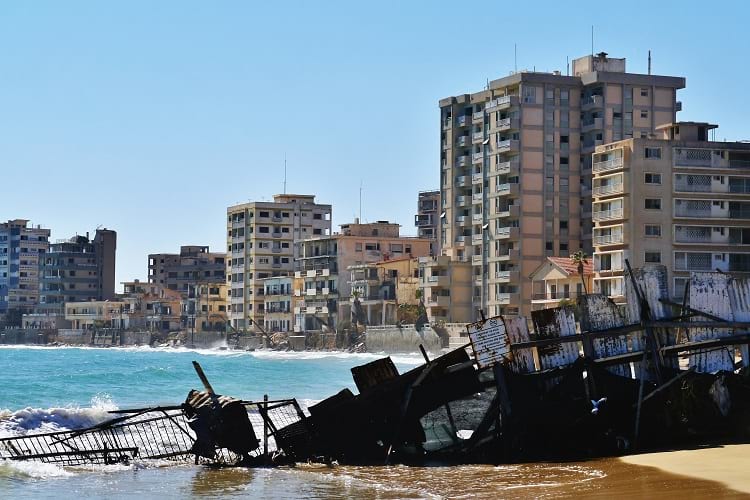 In the abandoned southern side of Cypriot City, Famagusta lies the deserted city of Varosha. It is quite famously known as the ‘Mediterranean’s best-kept secret’, quite an appropriate title taking into account the city’s fascinating history. Once upon a time, Varosha was the place to be for the world’s rich and famous. The splendid beaches and the glitz and glitter of luxury were the hallmarks of this retreat. Long stretches of sand and hundreds of luxurious rooms to pick from, ensured this paradise for the rich never stayed vacant for long. All the big names at the time found themselves in this spectacular resort city; starting from Richard Burton and Brigitte Bardot to Elizabeth Taylor. However, the idyllic business of the luxury retreat came to a halting end with the division of Cyprus in 1974. Left abandoned, the Varosha lies tucked away in its nostalgia and memories.

It has been forty years since the city last heard the carefree giggles of people strolling down the streets, their arms loaded with shopping bags. The city of Varosha has become akin to what dystopic movies try to bring to life on screen. In an interview, Ceren Bogac explained that it felt as though she was neighbours with ghosts while growing up in a house next to Varosha. She describes how the houses had pots, flowers, and curtains but no one lived inside. If a ball ever crossed into the city limits, it was gone forever. It was almost as though the story of “The Boy with the Striped Pajamas” had come true.

Ceren Bogac grew up with haunted memories of the paradise that used to be. This led her to eventually go on to build the Famagusta Ecocity Project along with Vasia Markides. “You’re seeing nature take over. Prickly pear bushes have overrun the entire six square kilometres. There are trees that have sprouted through living rooms. It’s a ghost town…” says Vasia Markides, one of the few inhabitants of the now abandoned city.

Varosha is currently under Turkish forces, and entry to the public is banned with orders to shoot on sight. There are photographs that prove how much of a ghost town the city really is. Other than Turkish soldiers, there are a few adventurous souls who have managed to wander into the city, bringing back anecdotes. There is a car dealership that is still fully stocked with 1974 cars. Window displays have mannequins that are dressed in a fashion that is long gone. Clothes hang on wires, while rotten food is still found in pots. An entire city is left to succumb to the ravages of time. 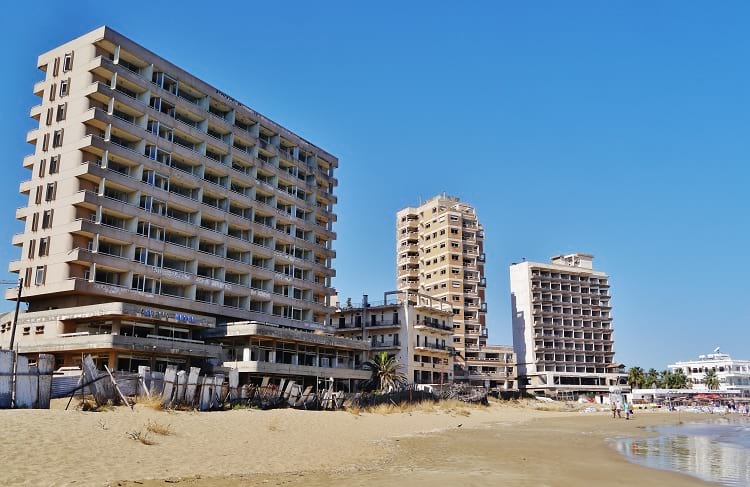 The city of Varosha had a populace of around thirty-nine thousand people at last count. The prominent John F. Kennedy Avenue housed several well-known hotels including the King George Hotel, and The Grecian Hotel, frequented by celebrities year round. The Argo Hotel was famous as Elizabeth Taylor’s favourite hotel to stay in.

The military combat on 20th July 1974 resulted in a victory for the Turkish army, and the Greek Cypriot army then retreated to Larnaca. Hours before this encounter, the inhabitants of Varosha fled fearing a massacre. All thirty-nine thousand people ran away from their homes with the hope that they could someday return.

As Vasia Markides says, “Anyone who comes from Varosha has a romanticised notion of it.” Survivors tell tales about how they had left pots of food cooking on the stove, and then their entire life came to an abrupt stop. Now peering back from over the fence, this erstwhile paradise has given way to a land of utter ruin.

The UN Security Council Resolution 550 of 1984 had ordered the Turkish Army to hand over Varosha to the administration of the United Nations. They also ordered that the city would be inhabited only by the ones who were forced to abandon their homes to save their lives. The Turkish Army, however, refused to comply and instead uses the city to their advantage to ensure Cyprus abides by their own terms.

The Famagusta ecocity project: An attempt to rebuild

The city of Varosha is currently encircled with a barbed-wire fence, leaving a major section of land out to waste. Vasia Markides, an American-Greek Cypriot hailing from Famagusta, built the Famagusta Ecocity Project together with Bogac. The project aims to reopen the city, while at the same time abiding by the two sides that govern the area.

The ultimate aim of the project is to rebuild Varosha, keeping sustainability in mind, and promote peaceful co-existence between the inhabitants of the place. The base model is of a modern-day ecopolis, and the eventual goal is to make it Europe’s model ecocity. There are three main aims that Markides is striving to achieve- peacebuilding, economic prosperity, and environmental sustainability. People from a wide arena of professions are involved in the project, including some of the best architects, economists, urban planners, and conflict-mediation specialists. The best in every imaginable field plays a crucial part in this project, aiming to bring forth nothing but perfection.

Infrastructure within the city remains quite intact. However, nature has taken its course, finding ingrowths amidst the already existing architecture. Drainage systems and transport systems are some of the more vital aspects of the project. Private car – centred Varosha of the past needs to be revamped in the vision of a sustainable and environment-friendly future. With sustainable development as a primary objective, the project naturally incorporates bicycle riding roads, tram lines, and public transport as part of the design revamp.

An important  remnant of the past

Varosha’s past is so intrinsically entwined with its essence, a  modernised version of the city might lose its ‘soul’. This is a major point to be considered during restoration. A walk down its bylanes is almost a literal walk down memory lane- with the city’s history preserved within every cobblestone and building in sight. The city of Varosha stands as a proud witness to precious history- of culture and violence, opulence and oppression.

Enjoyed this article? Also, check out “Kolmanskop: From Being the Richest Town to Now Being Devoured by the Desert“.

Previous Article
History of Lamborghini: Clash Over a 10 Lire Clutch Led to the Birth of Lamborghini Super Sports Car
Next Article
The Bengal Famine of 1943: The Man-Made Famine That Killed Around 3 Million Indians