Vantablack: A Manmade Substance that is Blacker than the Blackest of Black 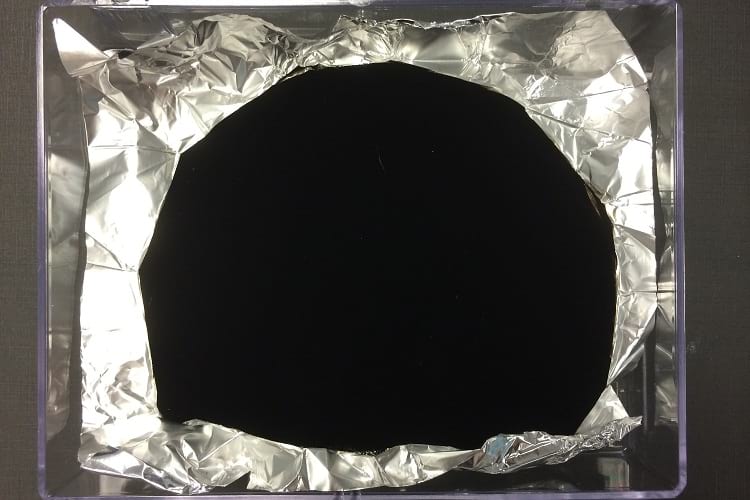 What is colour, one may ask? To put it in simpler words, colour is what the human eye perceives when a ray of light falls on an object and reflects from it into the surroundings. It is basically a certain wavelength of the ray of light that is absorbed and then emitted from the object that makes up a particular colour, which we see eventually. Black, for instance, is a colour that absorbs most of the light, which when cannot be reflected, makes us see the dark colour. But a few years ago, scientists in the United Kingdom created a substance that was so devoid of colour that it became the blackest material to be ever produced by man. Meet Vantablack, the blackest of the black.

Early in the year 2007, several scientific players were in a bid to outdo each other in creating the blackest material man had ever known; but only Surrey NanoSystems succeeded in getting theirs trademarked first. Initially, the work on creating a super-black material began at the National Physical Laboratory in the UK. Surrey NanoSystems in association with NPL worked on ideas to create the blackest substance which could revolutionize many frontiers. And so from the lab-grown experimental substance, the already existing super-black coating underwent several improvisations and Surrey NanoSystems came up with the name for their new material. An acronym of ‘Vertically Aligned carbon NanoTubes Array’, VANTA was prefixed to the colour ‘black’ to get the name of the darkest material ever – Vantablack.

Vantablack was made under a modified vacuum procedure called chemical vapour deposition process and was artificially grown on a substrate, in this case, on an aluminium foil. Millions and millions of carbon nanotubes vertically aligned close together and arranged in an order on a foil, under very high temperatures gave Vantablack its physical properties. Carbon nanotubes are microscopic, rod-like cylindrical structures that are almost five thousand times thinner than a human hair. When these densely packed minute tubules make up a substance, they help in making any material even stronger. When Vantablack was finally created, scientists found out that the new substance could absorb 99.96 percent of the visible light, which made an object coated with Vantablack almost impossible to discern even against a lighter background. It was so black in the absence of light bouncing back off that it felt like looking into a deep pit of nothingness.

Quite ironic as one may call it, Vantablack, the blackest substance ever synthesized, was created using carbon nanotubes, which were made to withstand a temperature of around 450 degrees Celsius emitted from several lamps. Scientists are of the opinion that its colour is the closest match to a black hole humans can ever see. It has ultra low levels of reflectance, meaning its surface does not give out any incident light that falls on a substance coated with Vantablack. It not just absorbs all the light in the visible human spectrum but also other radiations of all wavelengths that the human eye cannot perceive – right from ultraviolet to infrared radiation. Any form of light that enters a material coated with Vantablack gets almost totally absorbed into it and does not find a way out to escape from the tightly packed forest of carbon nanotubes. This trapped light then dissipates and gets converted into heat.

The colour is also super-hydrophobic, which means it does not allow water to have an impact on it or its physical properties. An aluminium material, for example, when coated with Vantablack would float on the surface of the water rather than sink to the bottom, like it usually would. Vantablack is resistant to high thermal exposures and also highly resistant to extreme shocks and vibrations. Vantablack can absorb such high amounts of light, without reflecting it further, that three dimensional objects, when seen from a certain angle, can appear to be two-dimensional to the human eye. Due to its rare physical properties that not many materials possess, Vantablack has found a wide range of applications.

The lab-grown, super black material has so many potential benefits that its application can revolutionize avenues such as space exploration, defence technologies, architecture and even art to name a few. Originally designed for use onboard space satellites, Vantablack found many takers eventually. Recently, the colour made its space debut on board Kent Ridge 1, a low earth orbit microsatellite, which is a conjunction between German and Singaporean organizations. Vantablack helped the satellite in improving its star-tracker control system and also helped in reducing the interference of stray light in the imaging systems while on the mission.

Thermal camouflage in defence technologies could also be one of the options that can find Vantablack at the helm of things. Due to its heat dissipating quality, Vantablack can also be used in solar power technology. A lens coated with Vantablack can prevent lens flares in powerful telescopes, thus reducing stray light to enter into it, which will allow space researchers to see some of the faintest and most distant objects in the universe. Due to its low reflectance properties, it can be used in infrared sensors, cameras and other imaging and mapping devices. Also, since its conversion of energy is huge, it can be used to power up electronics and other scientific instruments.

While ocular uses of Vantablack stay on top of the list of its potential applications, artists and architects are making use of this super black material to create designs that provide optical illusions for a viewer. At the recently concluded Winter Olympics in South Korea, a British architect Asif Khan unveiled a building called The Hyundai Pavilion in Pyeongchang, which was designed by coatings of Vantablack, and it came to be termed as the darkest building on Earth. British artist Sir Anish Kapoor, who is the exclusive licensee of the spray paint version of Vantablack called Vantablack S-VIS, dabbles in black colour in his artworks – which are mostly hypnotic and disorienting – and he now plans to use the new non-reflective colour in his select works. As far as military uses of Vantablack go, the super black material could mask off aircraft and hide them in stealth mode and can also be used to block out military equipment during the time of warfare.

This blackest of a black substance, which is touted to be even more expensive than diamonds or gold has so many probable uses in countless fields that working with it, will have endless possibilities. While a lot of agencies dealing in products for all walks of life are trying desperately hard to lay their hands on Vantablack, it is only a matter of time, before we get to know how Vantablack starts bending reality in the days to come.

Enjoyed this article? Also, check out “Eigengrau is the Dark Gray Colour That Most People See in the Absence of Light“.

Previous Article
Fingal’s Cave: The Musical Geometry of Nature’s Domain
Next Article
How Air India Carried Out the World’s Largest Civilian Evacuation in 1990