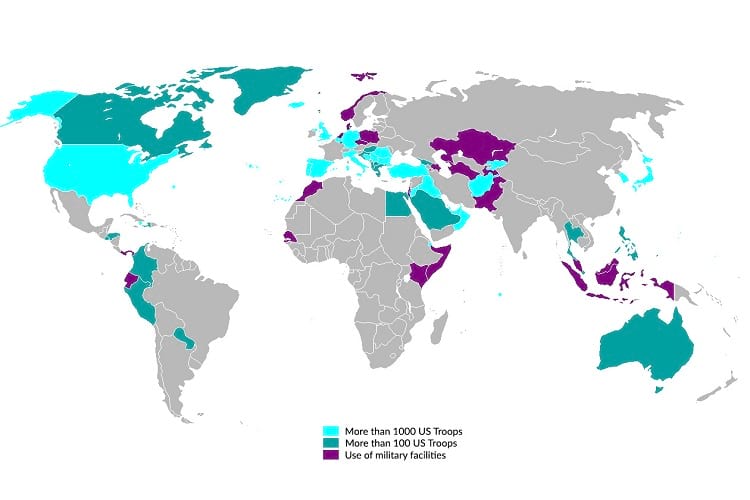 US military bases around the globe as of 2007. (Tree Sign / Wikipedia Commons)

The United States has a military presence or a base in over 500 locations overseas, according to Pentagon property portfolio. Such sites are said to be spread across 80 to 160 nations.

Meanwhile, documents in the US Department of Defense (DoD) indicate that the US maintains a further 4,000 plus such sites across 50 of its states and at least 8 US territories.

According to reports, there is a long list of locations where the US has its base. Some of them include bases in Djibouti, Peru, Portugal, the UAE, the United Kingdom and on the Indian Ocean island of Diego Garcia.

The BSR, however, strangely does not include undocumented bases like al-Tanf in Syria, Iraq, Afghanistan, Niger, Tunisia, Cameroon and Somalia. There are several such undocumented military outposts in Syria itself.

A handful of US soldiers are stationed at Akrotiri village on one of the islands of Greece. There are at least 44,000 American soldiers deployed a number of undocumented bases.

Hundreds and thousands of soldiers were housed in most of these undocumented bases in Syria and elsewhere. Military analyst David says that such undocumented overseas bases are a reflection of US’s lack of transparency since World War II.

Post World War II, the whole of Europe got devastated leading to its dependence on the US for the continent’s revival. This led to the expansion of the American military’s overseas footprint. Following which, America emerged as the sole superpower in the world and global super police. To strengthen its presence in Europe, the US entered into bilateral agreements with each and every European country. Establishing a military base in each nation was one of the agreements signed.

Thus began the journey of expansion of US military bases overseas.

Interestingly, before WWII there was no need for the US to establish any military bases overseas. Colonialism took care of that aspect. The US established its hegemony on the Philippines from 1898 to 1946, except for a brief period. It continued to run its naval and military base in that country till 1991.

Post-WWII, the US was successful in peppering the world with military bases. Most of America’s military bases are said to have been built sometime during the Cold War period.

As of today, America has 174 military bases in Germany. Meanwhile, Japan has 113 bases, South Korea has 83 bases, according to Pentagon documents.

Hundreds of US military bases

Hundreds of other US military bases can be found across countries like Aruba, Pakistan, Afghanistan, Iraq, Bahrain, Australia, Bulgaria, Kenya, Qatar, Colombia and several other Asian and African countries.

According to Politico Magazine, the size of these American bases varies. At some locations, they can be termed as ‘massive’ Little Americas. But at some other locations are mere radar facilities.

According to Richard Reeve, a member of the London-based think tank Oxford Research Group, the Obama administration was instrumental in massively expanding the US military presence in Africa.

Richard confirmed that these bases were designed to permit rapid troop deployment at any location on the Africa continent. According to Pentagon documents, America’s Africa Command, known as AFRICOM, is actually a laboratory for an alternative warfare process.

At the same time, the American overseas military expansion in Asia and Eastern Europe is to exert pressure on China and Russia, explained military analyst Diana Johnstone.

Independent geopolitical analyst Eric Draitser claims that America’s strategy was to weaken Russia’s expanding ties with Europe. He said the idea was to snuff out Russia’s economic and military power with the help of the tactic of encirclement.

In comparison to the US bases, the overseas military presence of nations like Russia, France and Britain simply pales. These three countries combined maintain just about 30 overseas bases, Politico Magazine says.

This America’s military expansionist paradigm comes at a massive expense. As per US defence budget proposals for 2019, the DoD requested for $686.1 Billion. This is more than $74 billion over the 2018 defence budget. However, as per the Rand Survey Report, the annual defence budget hovers around $150 billion, with an annual increase of $20 billion.

Giving these details, Lynn Petrovich of the Popular Resistance says these details summarise the latest fiscal expenditure on these US bases overseas.

US bases act as deterrents against enemies

According to Luke Vargas of the Talk Media News, US bases overseas generally act as deterrents against enemies or give an assurance to American allies. The bases are also part of the military supply chain process globally.

What are the consequences of such global deployments? What is the US proposing to accomplish through the overseas bases?

Basically, America’s challenge is all about deterrence and about pushing for war if necessary. Though both are important, the key factor is basically to deter any possible threat. Take the example of North Korea. Though small, Kim Jong Un’s nation has an unstable nuclear policy and, therefore, a threat to the world.

To deter any possible threat from nations like North Korea, America feels that it is better to station troops close to the danger zone to prevent any crisis. Also, it will be less time consuming and expensive. The presence of military bases can also help in engaging diplomatic dialogue to defuse any crisis, according to Luke Vargas.

Different types of US bases

There are different types of US bases at offshore locations. Some of them are temporary bases like in Honduras. The US establishes a temporary base if any local constitution prohibits the permanent presence of a foreign troop.

There are, however, reports of the involvement of US troops in the 2009 military coup in Honduras.

Another type of a US military base is a cooperative security location like in Burkina Faso. Such a base is called “lily pad”. There are at least 11 such bases in Africa, which host drones, surveillance flights and special operations forces.

The next US rents space from a contractor in a country even though there is no inter-governmental basing agreement. This is something like a US base at U-Tapao Naval Air Base in Thailand. The base played a key role during the Afghanistan and Iraq wars. However, Thailand authorities refuse to accept that there is a US base at U-Tapao.

During the height of the Iraq war, the US had 505 military bases in the troubled country. After the war ended, the US, however, withdrew its troops in 2011. Strangely, when the Trump administration recently requested the Iraqi parliament to keep 58 bases, it was rejected.

Iraq’s President Barham Salih said his country will not allow the US to use its land for attacking neighboring states, according to a New York Times report. He said this proposal is a threat to Iraq’s security and national interests. However, US troops continue to occupy five bases in Iraq.

Similarly, in the 1990s, the Philippines government told the US to withdraw its troops from their bases. This was, perhaps, the first instance where a local government and people had demanded the US to pull out their forces from their land.

Japanese revolt against US bases

In 2015, when the US proposed to relocate one of its bases in Japan to the Henoko coast in Okinawa, local people revolted. Governments and people feel that US military bases are harmful to many countries as they uproot local communities and devastate environment and health.

The US troops had used up uranium deposits in Iraq, dumped poisonous brews in Puerto Rico causing genetic damages to local people.

Sadly though, the US government refuses to be accountable for the harm caused, the British news service claims.

According to Newsclick, the UK feels that the American military base in Britain helps in protecting people from terrorist threats, piracy and organised crime. That is the reason why the UK has permitted the US to establish its military base in Diego Garcia. 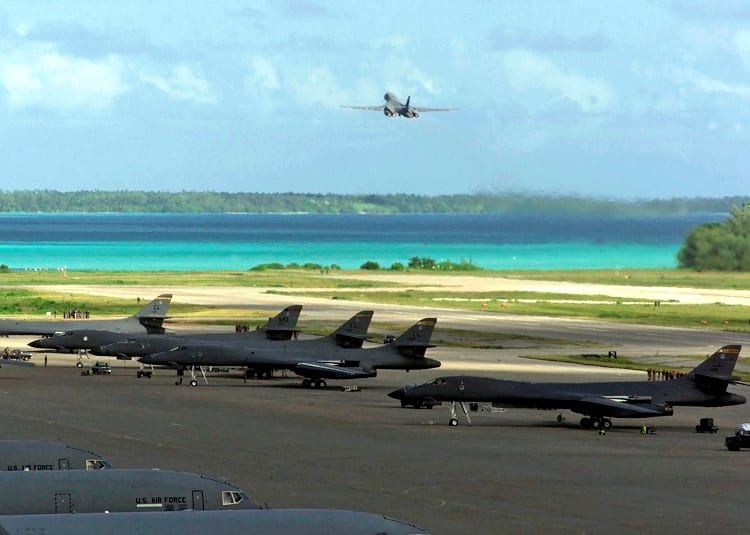 Citing the presence of Russia in the Arabian Gulf, the US dismissed the Mauritius claim and India’s backing. The US continues to hold Diego Garcia as the focal point of its economic and foreign policies.

India signs a pact with the US

In spite of its opposition to the American presence in the Indian Ocean, India signed an agreement with the US in 2016. As per the pact, India permits American troops to use IAF and Naval bases for logistic support if it wishes to attack China.

The pact, known as Logistic Exchange Memorandum of Understanding (LEMOA), is a major u-turn under the Modi government. In spite of the Modi government’s repeated denials, LEMOA has compromised India’s sovereignty, independence and neutrality for the first time, the news service reports.

Previous Article
RP FLIP: Ship Turned Research Platform which Sinks for a Cause
Next Article
Naqsh-e Rustam: The Incredible Tombs and Rockface Reliefs of the Sassanian Kings