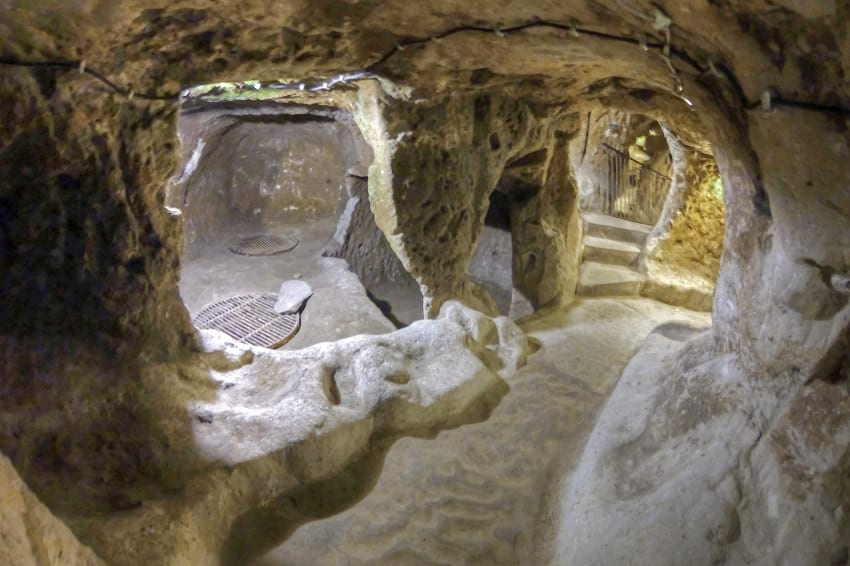 Among the 36 cities that were discovered in Cappadocia, in Central Anatolia, the deepest city is Derinkuyu underground city, while the widest one discovered is the Kaymakli underground city. Derinkuyu is a troglodyte cave city and is located 40 km away from Goreme at an approximate depth of 85 metres. It is considered as one of the many subterranean cities that were carved out of ‘tuff’, a volcanic ash rock. While it is unanimously accepted that the Hittites were the predominant settlers of the Anatolia region from 1600 BCE to 1200 BCE, archaeologists could not verify precisely when Derinkuyu was built, and by whom. Over time, the Hittite group had scattered to form smaller groups due to several invasions and wars. As a result, the Phrygians were believed to have migrated into and settled in that area from the Balkans.

According to several scholars, if it were to be hypothesized that the Hittites built Derinkuyu, it must have been well before 1200 BCE. The other strand of research has led scholars to believe that the subterranean city of Derinkuyu was built by the Phrygians between 1200 BCE and 800 BCE. These are the only two conjectures to have stood the test of time. This is primarily because all the other groups who dwelled in Cappadocia, including the Persians, Greeks, Macedonians and Syrians, had migrated to the region much later than the estimated period of construction of the underground city. The tunnel system, along with the chapels and churches, may have undergone expansion in the hands of later settlers.

Considering the Cappadocians were a Christian minority, they often faced religious persecution alongside invasions, and had resorted to the underground-city as their haven. Later, during the Byzantine period, when the Arab-Byzantine wars occurred, Derinkuyu was popularly used by the Muslim Arabs for shelter.

One of the earliest written records of underground cities in Cappadocia belongs to a Greek soldier-historian named Xenophon, from 370 BCE. In his work, ‘Anabasis’, he says,

“The houses here were underground, with a mouth like that of a well, but spacious below; and while entrances were tunnelled down for the beasts of burden, the human inhabitants descended by a ladder. In the houses were goats, sheep, cattle, fowls, and their young; and all the animals were reared and took their fodder there in the houses.”

The stunning urban planning of the underground-city

While the underground cities were not built feasibly for long-term underground dwelling, they were capable of withstanding any kind of attack and could house a large number of citizens along with their livestock for a sufficiently long span of time. 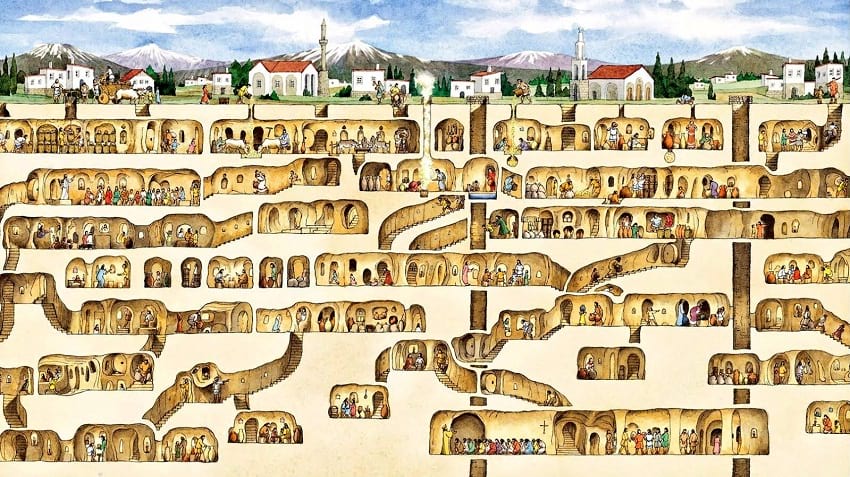 The underground city of Derinkuyu is believed to have over 600 doors that lead into it, some of which have been found hidden within courtyards and residences on the surface. The area primarily comprises of the usual rooms that could be found in an underground city, such as refectories, churches, cellars, wineries, storage rooms and stables, among others. Apart from these typical rooms, the second floor is believed to have had a missionary school housed within a rather large room and had a “barrel vaulted ceiling”. To the left of this missionary school, the city probably had study rooms for the students. 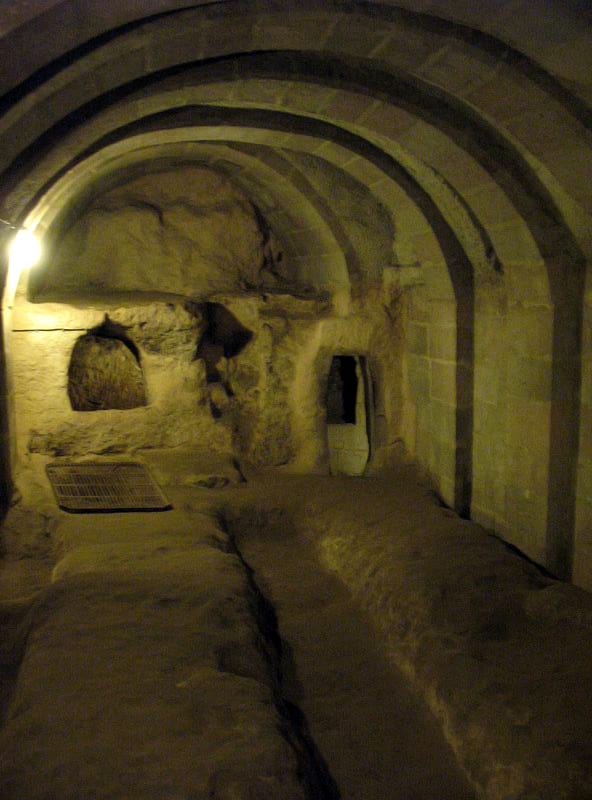 The descent from the third and fourth floors was by means of a vertical staircase, which ultimately led into a “cruciform plan church” which was housed on the lowest floor. The underground city also had a 55-metre deep ventilation shaft which perhaps also functioned as a well. In order to protect the city-dwellers from poisoning in case of a raid, not every floor was provided with a water well that went up all the way to the surface. Supposedly, Derinkuyu also has 15,000 other ventilation shafts that were used to provide fresh and clean air in the depths of the underground city.

The city-planning of Derinkuyu was urban in style, and quite possibly, very complex. They had a vast network of passages and tunnels, as well as stepped pits and inclined corridors, which were used to link family rooms and other communal spaces. People were believed to have gathered in these communal spaces to pray, socialise, and work. The underground city did not lack any necessity and had ample provisions for chimneys, wells, stables, water tanks, stores, as well as niches for oil lamps. In fact, the underground city even had isolated designated areas for the dead to be housed, until they could be buried properly according to the prevalent customs.

The underground city was very meticulously planned and had accurately balanced moving stones that looked like ordinary millstones, which were used to block corridors in case the settlement was under attack. 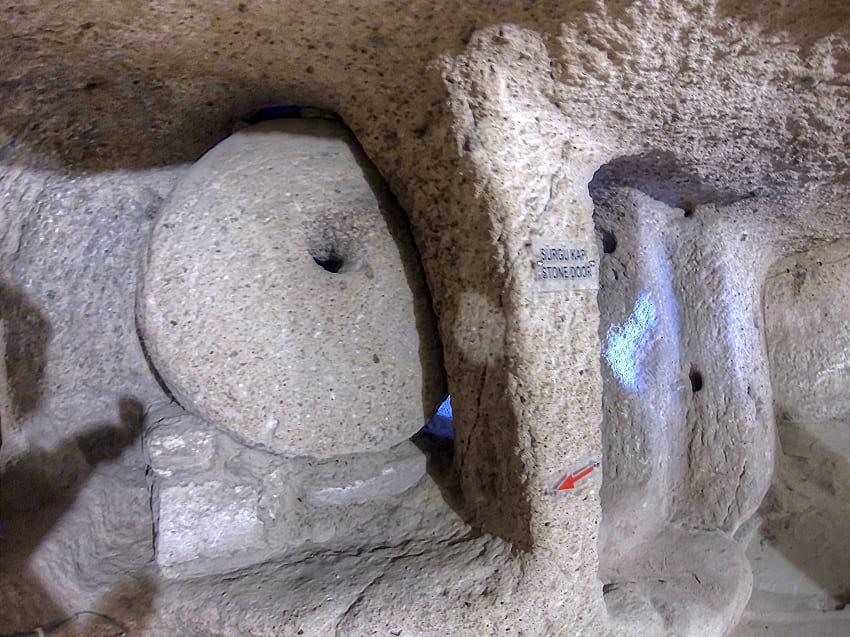 Stones were rolled over to close entrances in case of an attack. (Nevit Dilmen / Wikimedia Commons)

For a very long time, the underground city of Derinkuyu has remained hidden under rubble. It is only recently, in 1963, when this astounding city was rediscovered and brought to light. During the renovations of his house in Cappadocia, a Turkish man decided to take out a wall in his basement. However, he was surprised to find a secret room behind it. On continuing his digging, he found what seemed to be a labyrinth of thousands of rooms. This led to the discovery of one of the largest underground cities in central Turkey.

Derinkuyu is a hotbed of tourism

Six years after the underground city of Derinkuyu was discovered, it was first opened to the public. Even though approximately only 10 per cent of the entire city is available for public viewing, it is definitely worth a visit. Some of the other tourist attractions around Derinkuyu include Ortahisar, Avanos, Pasabag, Devrent, Hsibektas and Gulsehir. These places are primarily rock-cut castles, valleys, and settlements, whereas Avanos is believed to be the centre of pottery since the age of the Hittites. Cappadocia also has some ancient cave churches in the, as well as Caravanserais, which are 13th-century hotels on the silk road.

Derinkuyu, however, is not the sole underground city in the Cappadocia region. The Kaymakli and Özkonak are two other sister  megalopolis’ that stretches through the depths of this area.

Özkonak Underground City is located under a small village by the same name near Avanos. Akin to Derinkuyu, the Özkonak too was hidden beneath the ravages of time until as recent as 1972, when a farmer accidentally chanced upon it. He was trying to find the cause behind the water for his crops draining underground too soon when he stumbled upon this megalopolis with ten underground levels.  Similar to Derinkuyu and Kaymakli, Özkonak too has a labyrinth of underground chambers and an unusually well-engineered water system and network for ventilation. It even had a primitive communication system built across the levels. However, Özkonak differs from the other underground cities due to the ingenious addition of oil holes above all the city entrances. These holes functioned as a defence mechanism by allowing the city-dwellers to pour hot oil over invaders.

Though significantly smaller and less impressive as a structure than Derinkuyu or Kaymakli, Özkonak Underground City still has some amount of tourism centred around it sustained by the overall interest in the Cappadocia region and Derinkuyu.