Tower of Silence: Where Zoroastrians Leave their Dead to be Excarnated by Scavenging Birds 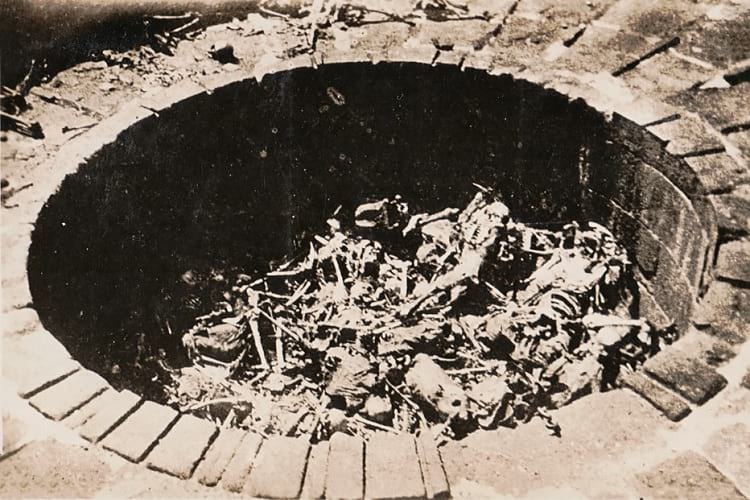 The cultures and traditions of the world vary from one region to another and so do the funerary practices of people of that area. Some communities believe in burning their dead, while others customarily bury their deceased. But despite the difference in places of performing a person’s last rites, the rituals almost remain the same for all, except for the Parsis. The members of the Zoroastrian community opt for sky burials, wherein they expose their departed loved ones to the process of excarnation. Their burial sites are called a dakhma or a Tower of Silence.

The followers of the Persian prophet Zoroaster all over the world are fire-worshippers and consider the four basic elements of nature – namely fire, air, water and earth – to be very sacred. They do not follow the regular mortuary practices, which include either burying the corpse, setting a wooden pyre or immersing the ashes into the water. According to their beliefs, a dead body is unclean and is a major source of contamination, capable enough to carry contagion. Zoroastrians even consider it unhygienic to touch a corpse.

As per their religion, a dead body attracts evil spirits or Nasu, which charge to attack the flesh of the corpse immediately after the stages of putrefaction set in. Therefore, the members of this community do not consign their dead to the flames; for it is the most exalted of purifiers according to their traditions and it also helps in avoiding the release of infection into the air. Immersing the ashes in a water body pollutes it while lowering a corpse inside the earth makes the soil impure too. So to preserve these elements, they choose the sky burial technique, which is considered to be one of the purest forms of funerary rituals.

What is the Tower of Silence?

Long before modern traditions took over, Persia was home to one of the oldest civilizations of the world. And with it came the sky burial practices. The ancient Greek historian Herodotus mentioned in his sixth century BCE writings that he had closely observed the Persians’ death rituals, which were mostly kept secret from the world during that time. But as knowledge advanced, the reasons for Zoroastrians’ mortuary methods finally came to light. Huge circular structures were erected on accessible mountain tops or in the deserts at an elevated place, far away from city limits for disposal of the dead. Corpses would be carried to this burial site and left for scavenging birds (mostly vultures) to eat away at the flesh within hours and leave the rest of the procedure to nature. This process also prevented the pollution of their four sacred elements. By the turn of the new century, Towers of Silence started to come into prominence and slowly became the most trusted and most preferred burial sites for Zoroastrians.

Specifications of a Tower of Silence

The modern-day towers of silence are huge, open-air, cylindrical structures with a flat roof. As tall as twenty-five feet in height and a circumference of two hundred and seventy-six feet, the roofs of these stone or brick burial pits have three sloped, concentric circles, which contain grates on them, all lined together in rows. The corpse of a man is placed in the outermost ring of the roof with the feet pointing towards the centre. Similarly, the remains of a woman are placed in the middle ring, while a child’s dead body is placed in the innermost ring. 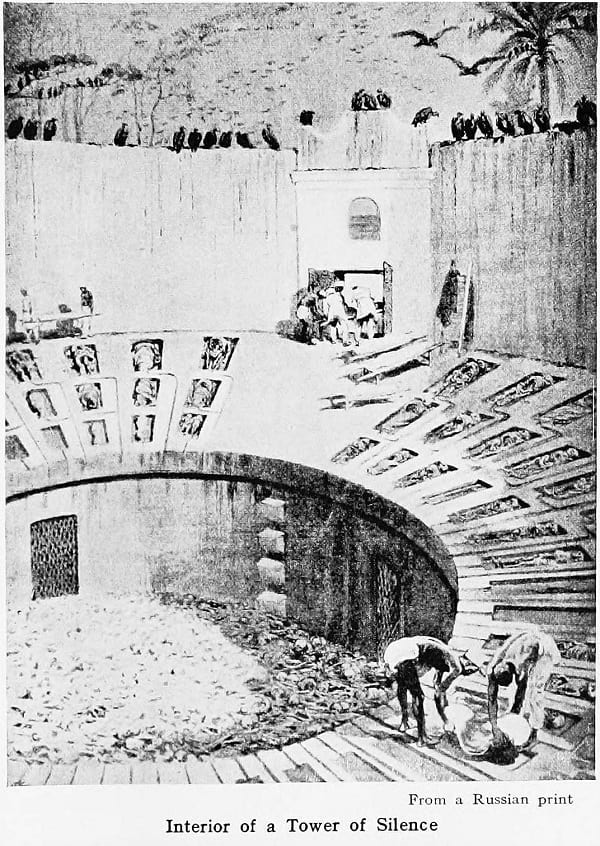 Illustration depicting the Interior of a tower of silence. (Wikimedia Commons)

After scavenger birds eat away the flesh, the bones are dried out naturally due to exposure to the sun for several long weeks. These bones that fall off into the central ossuary pits (also called astodaan) below are later treated with lime, which helps in further disintegration of the bones. Whatever is left of it then goes through sand and charcoal filters by means of rainwater and finally it either leaches into the soil or is let off into a water body.

Towers of Silence in Mumbai & around the globe

Although there has been a decline in vulture population for sky burials in India, along with dakhmas now falling under city limits, the ritual still remains in practice in most parts of the country. The dakhmas situated in Mumbai’s Malabar Hills are two of the oldest sky burial sites in the country. Apart from these, there are several other Towers of Silence mostly in the states of Gujarat and Maharashtra, including the ones in Nagpur and Aurangabad. Also, in cities where the Parsi population is scant like in New Delhi, Bengaluru, Nainital, Secunderabad and Chennai to name a few, dakhmas are constructed that now lie well within the cities boundaries.

The dakhma in Yazd, Iran is considered to be the oldest tower of silence in the world (dating back to some millennia ago), although nothing much of it now remains – both in practicality and physicality. After the Iranian government put a ban in the 70s on the use of a tower of silence, Zoroastrians of the world, including those in some parts of India, resorted to burying their dead in cement-lined coffins, a lot like the other religious practices.

Due to bans and diminishing scavenging fowl populations, Towers of Silence have now been reduced to relics, which add a shroud of mystery to the Zoroastrian sky burial practices that continue to perplex many all over the world.

Enjoyed this article? Also, check out “Tana Toraja in Indonesia: The Celebratory Funeral Ceremonies and the Tree of Baby Graves“.

Previous Article
Kármán Line: The Hypothetical Line That Delineates the Earth’s Atmosphere from Outer Space
Next Article
Andrée’s Arctic Balloon Expedition of 1897: A Peek into the Doomed North Pole Flight