The thylacine was a queer-looking wolf-like animal with stripes on the back like a tiger. It is said to be the largest carnivorous animal that was marsupial to have ever existed.

A marsupial is a species of mammals with a pouch, known as a marsupium, in which the newborn stays till old enough to leave. This extraordinary species has been presumed extinct after the last known of its kind died in a zoo in 1936.

Getting to know the thylacine

Though the thylacine was as slender as a fox, and the size of a wolf, its skull was shaped like a dog. Due to its origin in the Australian state of Tasmania, it was often referred to as the Tasmanian wolf or Tasmanian tiger.

Thylacines were known to be ambush hunters, attacking their prey with the agility of cats. A nocturnal animal by nature, it restricted to hunting small birds, animals like quokka and other wallabies.

A typical thylacine was approximately 100 to 130 cm long, with an average weight of 25 to 30 kg. It sported yellowish brown fur with dark stripes on the back. It’s tail was 20 to 25 cms long, and rather stiff, pointed away from the body like a kangaroo’s.

The jaws had an impressive colossal gape of nearly 90 degrees. Being marsupial, the female of the species had a pouch on the belly with the opening towards the rear, in between the hind legs. Partially developed, the young thylacines had well-built muscles in their forearms to climb into the marsupium. 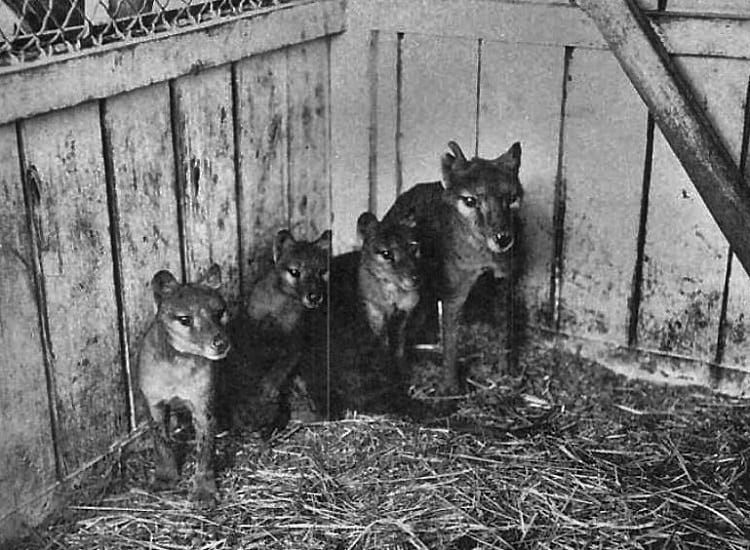 The female sometimes carried up to 4 young thylacines in her pouch and the young suckled within till they became old enough.

The first appearance and extinction

The Tasmanian tiger, though extinct for many years in most parts of Australia, seemed to have survived well into the early 20th century in Tasmania. During the era of the European settlements in Tasmania in the 17th century, they were held responsible for the predation of sheep and other farm animals.

The Van Diemen’s Land Company started by British merchants, put a bounty on the thylacine in 1830. By 1888, the government of Tasmania, convinced of the killings, were offering £1 for killing an adult thylacine and 10 shillings for a pup. 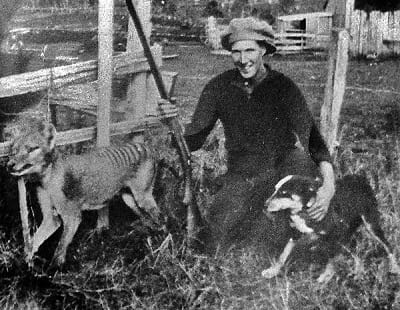 1930: The last wild thylacine hunted by a farmer. (Wikimedia Commons)

By late 1920s, the Tasmanian tiger was rarely spotted in the region. Probably the result of killings by bounty hunters, and farmers themselves in order to protect their animals.

Though the popular belief was that the thylacine was responsible for the killings of farm animals, the ‘Tasmanian Advisory Committee for Native Fauna‘ started zeroing on natural reserves as a suitable habitat for protecting the already endangered species.

Apparently, the last thylacine that was killed, was in 1930. Rumoured to have been a male, it was shot by a farmer, Wilf Batty in the small town of Mawbanna in Tasmania.

The absolute last thylacine was considered to be one which had been trapped in the Florentine Valley by a timber cutter named Elias Churchill in 1933. Elias sent it to the Beaumaris Zoo in Hobart, Tasmania. Unfortunately ‘Benjamin‘, as the Tasmanian tiger came to be known as, died on September 7, 1936.

Benjamin’s death was also the end of the last known thylacine. The thylacine was eventually proclaimed to be extinct in 1982 by the International Union for Conservation of Nature and subsequently in 1986 by the Tasmanian government). The fact that Benjamin was a male could only be determined in 2011 after a detailed study of a small motion film footage taken by Zoologist David Fleay in 1933 was done. The day of death of the last thylacine is observed as the “National Threatened Species Day” in Australia since 1996.

Thylacine sightings: A glimmer of hope?

There have been several alleged sightings of the Tasmanian tiger since its extinction in 1936. In 1973, a South Australian couple Liz and Gary Doyle claimed to have captured a 10 second footage of the marsupial on camera. However, it could not be established that the footage was of a thylacine because of the poor quality of the film. 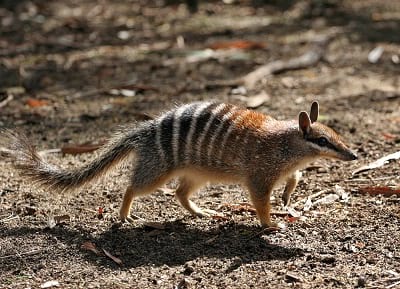 Numbat, native to South Australia is the closest living relative of the thylacine. (Martybugs / Wikimedia Commons)

Later in 1982, wildlife biologist Hans Naarding came face to face with the animal which darted away before Hans could take a picture. Kevin Cameron who worked with the Agricultural Protection Board, took 5 photographs of the thylacine in the wild. He spotted the animal in 1985, intently digging behind a tree stump with only the rear portion of the body visible.

Distinguished Research Professor at James Cook University in Australia, William F. Laurance, kick-started a search for the elusive animal in 2017. The same year, a trio who call themselves the Booth Richardson Tiger Team (BRTT) claimed to have video footage of the Tassie tiger. The recordings were not conclusive when assessed by wildlife experts.

Whether it is really extinct or not, is a mystery yet to be solved. One thing that can be concluded for sure, is the fact that the Australians are determined to find their beloved Tasmanian tiger if it still exists, one way or another.

Enjoyed this article? Also, check out “Maned Wolf: The Existential Crisis of Chrysocyon – the Golden Dog That Looks Like a Fox“.

Previous Article
Halley Research Station: The First Floating, Relocatable Research Facility in the World
Next Article
The Amazing HeroRATs and their Keenness to Detect Landmines and Tuberculosis