Thilafushi: The Good, Bad and Ugly of the Garbage Island of Maldives 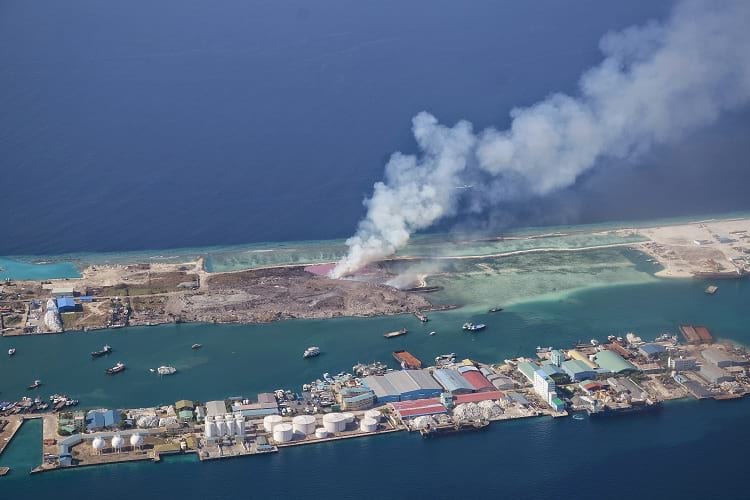 Any short term solutions can create a gigantic problem later on. This happened with Maldives, seeking disposal of litter created by the visiting tourists. The trash was dumped on Thilafushi Island, a convenient riddance. This garbage dumping island of Maldives is also known as ‘The Rubbish Island’.

In time, the garbage mounted to 330 tons per day, and the island soon became the world’s largest rubbish dump. The blue lagoon of Thilafushi was reduced to stinking garbage. Burning/Processing of the waste polluted the ecosystem of an island renowned as ‘Tropical Paradise’. A worker carrying rubbish inside the island. (Dying Regime / Flickr)

Began as garbage bin of the capital of Maldives

Thilafushi, the Trash Island, is a short distance from Male’, the capital city of Maldives. A creation of throwaways from the visiting tourists, a blemish on the scenic beauty of the island, it began as a dumping ground for Male’s municipal waste. Male’ has a lakh of people living in an about two square kilometre space, making it world’s topmost human-density. Hence, the waste output is in top order.

In spite of environmental pollution by junk, tourism thrives

The heaps of garbage are transported to Thilafushi by ship. Offloaded junk is first sorted manually. A part of it is burned away and part is buried in the ground. The electronic and hazardous wastes are a part of the garbage, much to the worry of environmentalists. Asbestos, lead and spent batteries contaminate water and thereby harm ecology and human health. The tourists don’t seem to mind the junk. Empathising comments bear this out. Like, litter after all is contained and not dumped in the ocean, what else can a nation, barely 1% above sea level, do to parry junk? Many find the dump a creative way of waste disposal. The Maldives, therefore, continues to be a popular destination among the tourists.

All waste from Kaafu atoll (the islands constituting the administrative block of Maldives) and resorts across the Maldives, is pooled up at Thilafushi. The plastic and metal from the junk is recycled. Waste from construction work is spread out in the shallow sea water to increase the land area of the island. Garbage thus converted to land is rented out to industries. That’s quite a gain as otherwise the industries would encroach on the meagre living space available to the local inhabitants. 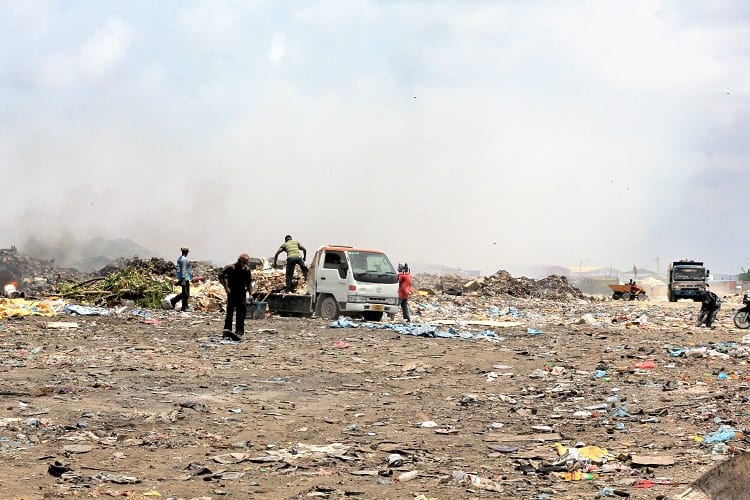 Trash being offloaded at the island. (Shafiu Hussain / Flickr)

Tourism and trash are mutually reinforcing

A chain of factories, shelter for hundreds of Bangladeshi migrants who process junk to make a living and an unending stream of garbage; all these add up to increase the land area of Thilafushi by a square meter a day. Maldives reaps gold from tourism ($4,500 GDP per head), and every tourist generates 3.5 kg of junk per day. The wealth created by tourism though isn’t uniformly spent on public welfare. A big chunk of it is spent on huge quantities of edibles and petro diesel imported for the tourists. That incidentally augments the garbage load which, lately, is being shoved to India. The ships which bring vegetable from India, take junk material along on return journey. This junk is then processed and sold in India.

The Government of Maldives was sieged of the waste problem since long. The problem became all the more vexing in view of the climate change. Sea level is rising because of global warming and the Maldives faces a real threat of getting engulfed by the sea. The State finally ruled against the pooling of junk at Thilafushi. The illegal dumping of waste directly into the sea which was going on earlier also came to an end. Unfortunately, the trash now finds way to Indian shores.

On a positive note, the drive against junk is here to stay. Mohamed Nasheed, the President of Maldives, held an underwater meeting in 2009 to highlight the perceived threat of Global Warming. A contract was signed with Tatva Renewable Energy, India, to recycle garbage, and use it as a source of energy. The contract was cancelled following a political turmoil in the Maldives, but the baton was picked up by tourist resorts.

Kurumba Resort has reduced its garbage output by 70% with innovative waste management. The Reethi Rah resort has its own solar power and trash recycling system. The visitors to this resort enjoy a guided tour of the recycling facility. Club Med’s Finolhu resort is also solar-powered, and a zero-waste unit.

Enjoyed this article? Also, check out “The Lonely House on Ellidaey Island, Where Nobody is Sure of its Residents“.