The Unknown Fate of Grand Duchess Anastasia of Russia

ANASTASIA IS A GREEK name meaning ‘of the resurrection’. It became an apt name for Anastasia Romanov, daughter to Nicholas II – Tsar of Russia (18 May 1868 – 17 July 1918) when she was rumoured to have come back to life, or rather escaped death. This was after the infamous Romanov family assassination in which the Tsar, his wife and five children were brutally executed. When the dust settled, there were rumours that many of said family survived. Some believed that Anastasia escaped the assassination, whilst others believed those who claimed to be her were imposters. In recent years science has become proficient in the field of genetics and can dispel such claimants. However, in past years many famous people who died in peculiar circumstances would likely have people claiming to be them–seeking fortune or fame. This was the case for the Grand Duchess Anastasia Romanov, who went missing at the age of seventeen. She had at least ten women claiming to be her and therefore the beneficiary of the Tsar’s estate.

The situation in Russia

Russia began as a nation as early as 882 ACE during the foundation of the Kievan Rus Empire—a federation of Slavic tribes. A dynastic family called the Romanovs took control in the 1700s and did so until the Russian Revolution in 1917 which brought about a call for communism in the Russian Empire. The last Tsar of Russia—Nicholas II—abdicated to bring an end to the Romanov dynastic rule. This event brought about intense periods of civil war between an aspiring political party called the Bolsheviks and anti-Bolshevik factions, many of whom still favoured the Tsar. The Communist Bolsheviks won, illustrating their victory by killing the Romanov family on the orders of Vladimir Lenin–it is assumed.

This family had links all over Europe and married internally to keep the bloodlines strong. Since the time of Michael–the first Romanov Tsar (1596–1645), they transformed Russia into a global power, meaning the age of prosperity for many of its citizens. Anastasia’s father and descendant of Michael–Nicholas II–had a family tree branching the length of Europe. His father was the Tsar of Russia and his mother a Danish princess.

His aunts and uncles included: King Frederick VIII of Denmark, George I of Greece and Queen Alexandra of the United Kingdom. For cousins: German Emperor Wilhelm II, King George V of the UK, the King and Queen of Norway, King Christian X of Denmark and Constantine I of Greece.

Despite this influence and power, by the time of World War One, many citizens of Russia became displeased by the Tsar’s efforts. Some of this stemmed from his wife Alexandra–granddaughter to Queen Victoria of Great Britain. She was born a princess of Hesse and Rhine–a part of Germany, but after several proposals and spouses Alexandra married the Tsar of Russia to become the Empress–or Tsarina–of Russia. She had five children: Anastasia, Olga, Tatiana and Maria, and Alexei. Like Queen Victoria, Alexandra and her son Alexei had haemophilia; an inherited blood disorder, wherein blood doesn’t clot normally. This would contribute to their downfall. And with World War One against Germany, the Russians did not trust Alexandra as Germany was her birthplace.

Read more: The rise of Rasputin’s a Russian mystic and self-proclaimed holy man who cured the Tsarevich, the Tsar’s only son and future ruler

Tsar Nicholas II left the royal palace in St. Petersburg in 1917 (at the time Petrograd to sound less German) after the Bolshevik forces pressurized the family and regime. They sought to install a communist regime. Nicholas II and his family were arrested and exiled to the Urals by pro-Bolshevik forces under their leader Vladimir Lenin, though it was the decision of the Supreme Council of Russia. Into a town called Yekaterinburg, the Romanovs were transported towards the vast, desolate stretch of Siberia. The Bolsheviks had taken over many government buildings around Russia, as well as a residential mansion–Ipatiev and transformed it into a prison. On the night of July 16, 1918, the whole family was taken to the basement of the aforementioned mansion to be shot. 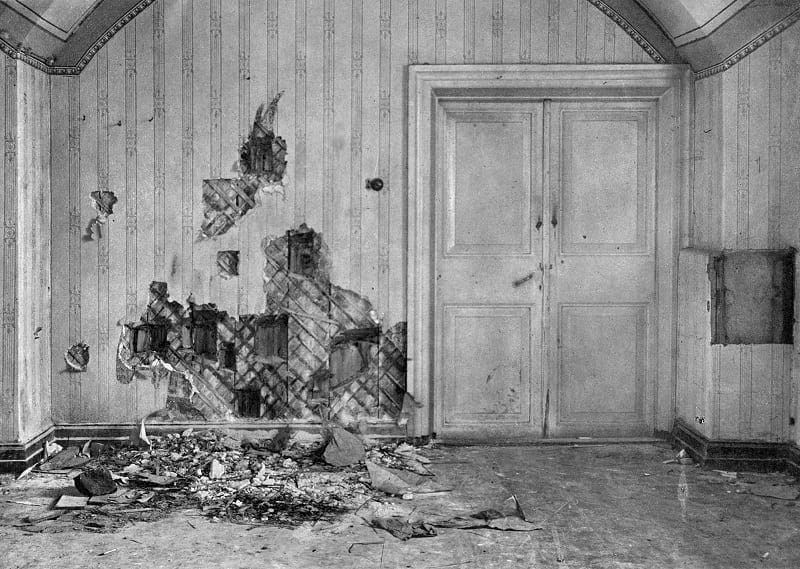 The basement of the Ipatiev house—the site of execution. (Wikimedia Commons)

The mystery of Anastasia Romanov 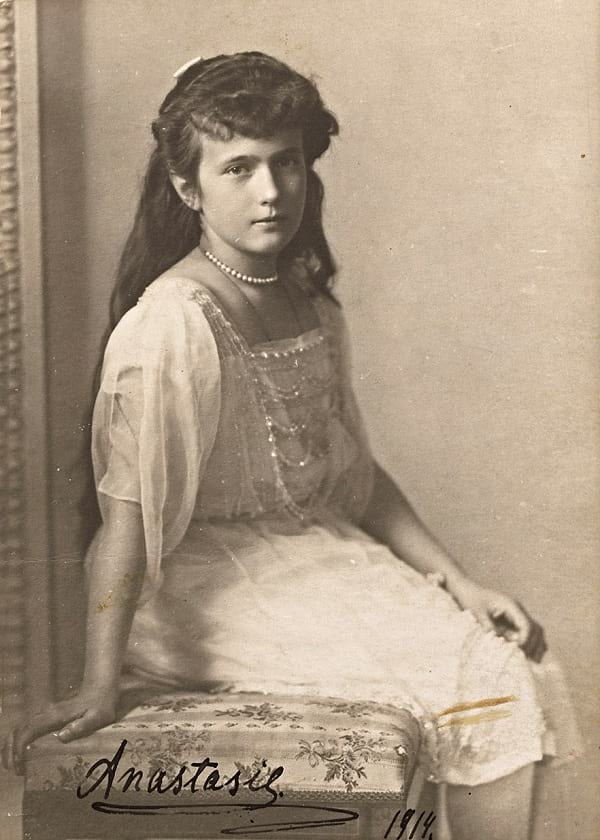 Photo of Princess Anastasia Nikolaevna of Russia, with her signature. (Galerie Bassenge/Wikimedia Commons)

Anastasia was born in 1901 near St. Petersburg–at the time the capital of Russia. She was said to have been murdered in the Ipatiev Mansion, but several people came forth claiming to be her years after the event. As not all bodies were found there was much speculation and many conspiracy theories that few members of the royal family escaped. A plausible theory is that because they had sewn jewels into their clothes before the assassination, it protected them. The jewels had deflected the bullets and bayonets from the would-be assassins. When World War One had finished and civil unrest had quietened, several people claimed to be Romanovs. A big reason was the unclaimed inheritance.

The most famous of these came to be known as Anna Anderson, who emerged in 1920. She had tried to commit suicide in Berlin, jumping off a bridge into a canal, but her attempt was futile. She was checked in to a mental hospital called the Dalldorf Asylum. The girl had no identity, only occasionally using the names Anderson and Tchaikovsky, yet she spoke very little. She had a foreign accent when she spoke German—presumed as Russian and was called Miss Unknown. 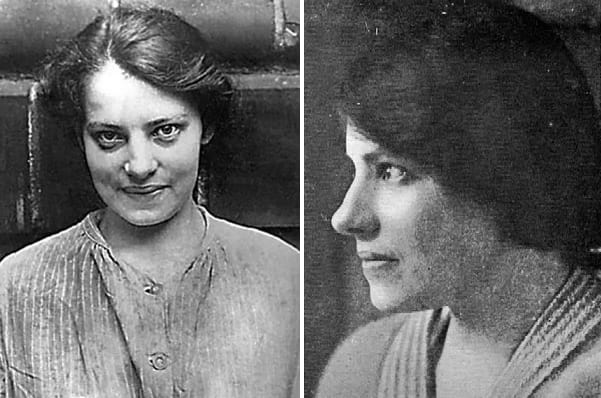 Rumours passed in the asylum of her being one of the lost Romanov girls–one of the biggest world stories at the time. For this reason, she was taken in by a Russian emigre called Baron Von Kleist who believed her to be of Romanov descent. After some time, she spoke more and explained that a Bolshevik soldier helped her escape after finding the bodies outside the Ipatiev Mansion. A Colonel who was acting as a communications officer in Budapest confirmed this, establishing that Anastasia had arrived with a man called Alexander Tchaikovsky. They sold her royal jewellery to stay alive in Budapest, but after Tchaikovsky was killed she fled to Berlin in fear. Many would come to visit her, some recognised her as the tsarina, and others did not. She met enough people who had faith in her to survive, the kindness of strangers, or perhaps the agenda of strangers gave her bread and board in many places. For instance, the famous Russian composer Sergei Rachmaninov paid for her hotel stay in the US during one period. The Romanovs had a family doctor who was also executed at the Ipatiev Mansion, but his son survived. His name was Gleb Botkin and he would vouch for Anna as Anastasia for all of his days. He recalled meeting her when they were both children.

It would be her behaviour which made the people who took her in lose patience, alas. She displayed many signs of madness at different times, such as throwing tantrums or running around naked.

When she ran out of supporters in Europe, she moved to the US and stayed with another Russian émigré and supposed cousin–Princess Xenia. She had similar success here as some emigres believed her enough to house her, but most eventually let her go. Her tantrums always led her back to insane asylums. Anna eventually settled with an eccentric American professor and friend of Gleb Botkin called Manahan, where she lived out her days in squalor–even though they were said to have a minor fortune. Botkin was the best man at the wedding in which Anna legally became Anastasia Manahan. It would not settle her down however as she ended up in asylum again. On one occasion Manahan helped her break out, but the police caught them and she was admitted once more. In 1984, she died of falling health.

There was little transparency during the Soviet Union, so it was not until the dissolution of the Empire neared–the falling of the Iron Curtain–which cleared up matters such as these. A DNA test in 1991 proved that Prince Philip of the UK (grandson of Queen Victoria) was not related to Anna Anderson and therefore she could not be related to the Romanovs. In 1927, a private investigation found her to be Franziska Schanzkowska of Poland, but it could not be proved until a similar DNA match in 1991.

Other imposters included Nadezhda Vasilyeva and Eugenia Smith, but none led as extraordinary life as Franziska Schanzkowska. A film was even made to showcase Schanzkowska’s exploits starring Ingrid Bergman. The life of this woman is hard to wrap one’s head around. It is more eventful than the lives of many thousands of people combined. As with the story, modern science brings the dissolution of much mystery in the world. There is a certain sadness to that, but if justice prevails, then we cannot lament.

On 17th July 1998—the 80th anniversary of their deaths, the remains of Nicholas II, his family and entourage were reinterred in St. Catherine’s Chapel. The final resting place of the Romanov family at Chapel of St.Catherine The Martyr in St.Petersburg. (Ninara/Flickr)

However, the remains of two Romanovs were never found. But in 2007, archaeologists discovered the remains of two individuals believed to be of Alexei Nikolaevich and the missing daughter—either Anastasia or her older sister Maria. A DNA test was carried out whose results remain inconclusive.

Previous Article
Opinion: Muslim Women Have Been Critised for their Face Veils for Years. Now, We’re All Niqabis
Next Article
Mehran Karimi Nasseri’s 18 Years Stay at the Airport