The Secret US Mission to Blow Up the Moon- Project A119 World War II (1945) brought two ideologically opposed nations, America and Russia (the Soviet Union or USSR) to join hands in favour of the allied forces. But their ideological differences made them wary of each other for long. This strained relationship, aptly described as the Cold War, ended only with the total collapse of USSR in 1991. Before the war, both nations tried to intimidate one another. The plan to blow up the moon with an atom bomb was one tactic suggested by both. However, good sense prevailed, and the plan was never executed.

They were also apprehensive of the Soviet Union’s plan of expansion beyond the occupied territories. And on the other hand, Soviets nursed a grudge against America for not having recognized them as part of the international community for long. Russians also took exception to America’s delayed participation in WWII, which cost them millions of lives.

The ill will between the two nations soon galvanised into policy matter. Post World War II, America adopted a policy of ‘containing’ the Soviet Union. There could never be a permanent agreement with Soviets. Hence the best way out was vigilantism to check Russia’s ‘expansive tendencies’. This, for over four decades, remained the undercurrent of the foreign policy of America.

Read more: When the CIA trained cats to spy on the Soviets

Atomic power was a new symbol of military might

The policy of restraining USSR also became a reason for building and storing war weapons. Arms budget of America was increased four-fold, and Americans deemed communist expansion a threat to America and the world. Hence such expansionism was sought to be curbed with military force. Atomic power, which gave Allied forces victory in WWII, became a symbol of military might. USSR tested atomic explosion in 1949. America retaliated by testing a more powerful hydrogen bomb. USSR responded with a test explosion of improvised and updated weaponry, ‘super bombs’.

Americans and Soviets geared up for nuke challenge

Atomic explosions come with a price tag. The environment gets dangerously polluted with radioactive waste. The fear that these explosions could annihilate the world, like Hiroshima and Nagasaki, grew by the day. Post-WWII Americans built bomb shelters in residential areas. They carried out mock drills in schools and public places for remaining safe in the event of a nuclear holocaust. Both nations implied the Cold War.

No wonder the emerging field of ‘Space Exploration‘ too became a bone of contention between these two nations. Soviets led by launching the world’s first artificial satellite, Sputnik, in space on October 4, 1957. The satellite was launched by firing the Russian R-7 intercontinental ballistic missile. America, second in a space race, was rattled—what if R-7 carried a nuclear weapon instead of a satellite? America thus enhanced its surveillance of the Soviet Military.

Communists of America were declared traitors

Apart from external threat, America faced an internal threat too. A report of the HUAC (House Un-American Activities Committee) said that there were groups of communists spread all over America. They were traitors serving the interest of the Soviet Union, not America. Committee’s finding came as a rude shock and course correction was done in a big way. Communist ideologues were denied work. Thousands of state employees were hauled up for investigation. Suspects, including University Professors, were charged with subversive activities and were fired from their jobs. Anti-communist/anti-Soviet sentiment prevailed in every nook and corner the American society.

Read more: The Soviet ‘Masterplan’ to use dogs for bombing German tanks

When North Korea, aided by USSR, invaded South Korea in 1950, it was construed as communist expansion, and America responded by deploying its military force. Korean War ended in a standoff in 1953. But the muscle-flexing of the nations continued unabated. America made West Germany a member of NATO (North Atlantic Treaty Organization) in 1955. Soviet Union countered this with Warsaw Pact, a unified military command of USSR with Albania, Poland, Hungary, Romania, Czechoslovakia, Bulgaria and East Germany.

America, in 1961, made a discrete but unsuccessful attempt to topple Fidel Castro’s communist rule in Cuba. The very next year, the Soviet Union constructed the base for its nuclear missiles in Cuba. Panicked, America made frantic efforts to avoid a prospective atomic war. A reconnaissance US aircraft that flew over Cuba was shot down. US Navy was put on red alert. This was nearest that the two superpowers could have come to a nuclear flashpoint. However, direct communication between the American President John F. Kennedy and the Soviet Premier Nikita Khrushchev ensued, and peace prevailed. A hotline between the White House and Kremlin for emergency talks was established for good. The two sides agreed to work towards the goal of a nuclear test ban treaty.

Project A119 ticked silently in the background

Even as the aforesaid scenario unfolded, a top-secret space project of America, proposed in 1958, thrived in the backdrop. It was ‘Project A119’, beguilingly called ‘A Study of Lunar Research Flights’. Leonard Reiffel, a physicist who would become Deputy Director of NASA’s Apollo Program, headed the project. 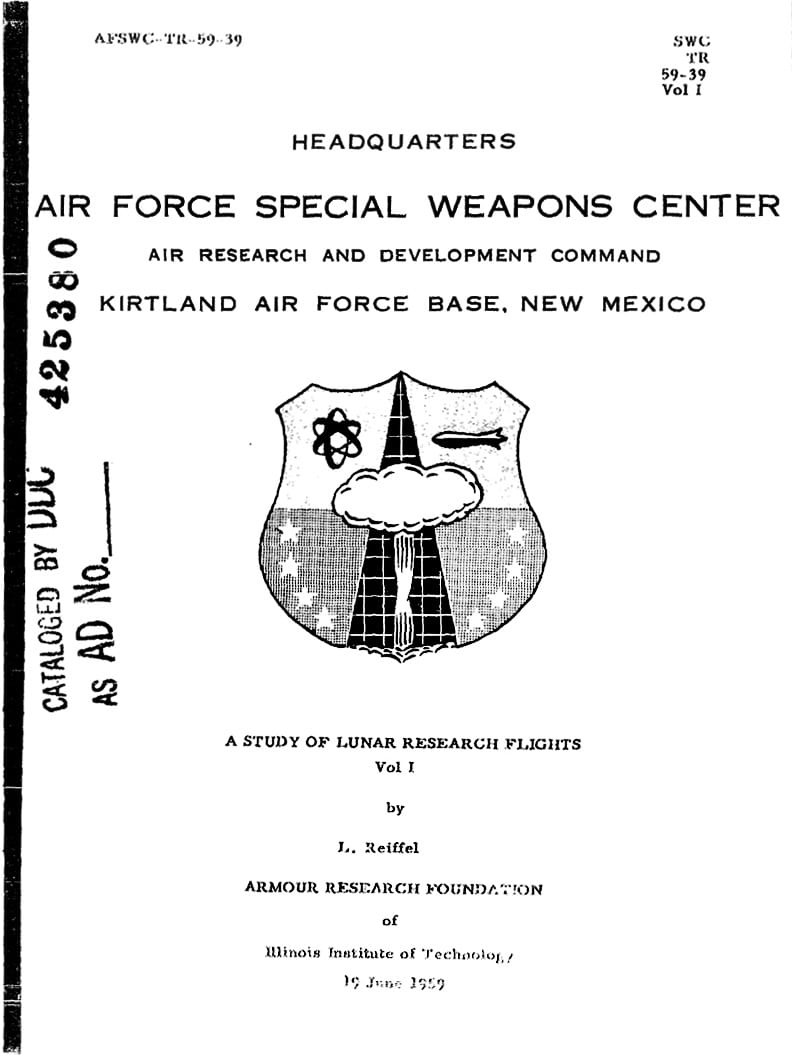 Explosion on the moon was meant to scare the Soviet Union

The US Air Force directed Leonard Reiffel to conceptualize a nuclear explosion on the surface of the moon and work out its immediate (visible) and long-term effects. Reflecting on the proposal, Reiffel, much later in the year 2000, observed that proposal was out and out, a PR exercise. A mushroom cloud was what they wanted to see on the moon, with just one aim, to browbeat Russia in the space race. A visible mushroom cloud on the moon would humble the Soviets and put Americans in a one-up position.

Secrecy of Project A119 leaked

Reiffel had made a ten-member team for executing Project A119. It included two noted Astronomers, Gerard Kuiper (now considered as the father of modern planetary science) and Carl Sagan (who became a celebrated television personality later on). Even as the project was top-secret, Sagan inadvertently reneged on secrecy. In 1959, while applying for the Miller Institute of Graduate Fellowship, he wrote about his engagement with Project A119. Keay Davidson collected this spec of evidence in the late nineties while writing Sagan’s biography. When the book was released, Reiffel was forced to acknowledge and explain Project A119.

Researchers worked out the details of hitting the moon

Leonard Reiffel worked on the moon bombing project at ARF (Armour Research Foundation), Chicago, from 1958 to 1959. The place is now the Illinois Institute of Technology Research. His research concluded that the moon could indeed be hit within an accuracy of two miles. An intercontinental missile, already launched by the US in 1959, was good enough for it. The light-weight Atom bomb would be a better choice compared to the heavy-weight Hydrogen bomb. If the moon was nuked, dust and gas would rise on the moon surface would be good subjects for study. How the hit would be different for the two sides of the moon, light and the dark was explained.

Before the launch of the atomic warhead, Rieffel explained, three identical instruments must be put on the moon surface. These instruments would measure a slew of parameters at the time of the explosion, and the moments before and after the explosion. These findings would enrich our knowledge of the moon, and its environment, and planet earth. It would also expose any microbes that may live on the moon surface. Thankfully, the idea of nuking the moon with an atomic missile remained limited to a hypothesis and was never implemented.

Controversies around Project A119

When the project information leaked in the late nineties, it attracted wide-ranging public debate. There were speculations that had the explosion been actually carried out, the moon would have been trashed. Reiffel rubbished such claims and said the explosion, at worst, could have created a small crater on the moon. So small that best of the telescope couldn’t make it visible on earth. Reiffel conceded that the contamination of the moon’s environment with radioactive material was a dangerous prospect. Such contamination could thwart research related to the origin of life on earth. Hence, Project A119 was dismissed.

There were other apprehensions as well. Like the possibility of a bomb-carrying missile straying from the path and falling on earth. Also, nuclear device exploding midway, short of reaching the moon. These possibilities may have dampened the enthusiasm of the US Air force, and the space adventure was quietly dropped.

What was USSR’s stand on the moon all this while? Surprisingly, the Soviet Union planned and geared up on similar lines. And accordingly dropped the idea of polluting the moon.