Tarrare: The Man Who Ate Too Much Yet Stopped at Nothing 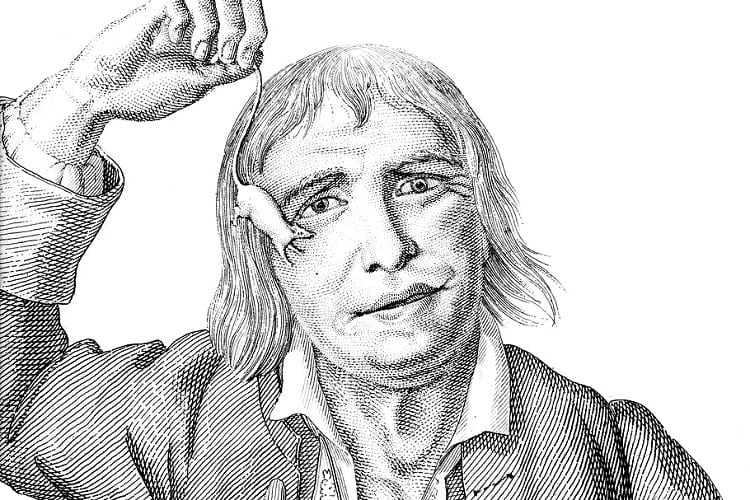 In the late 1700s, there lived a man named Tarrare, who had such an insatiable appetite that he couldn’t go without eating anything after he just had a fill. People who knew this mysterious man from the past identified him as a glutton, but when his medical tests came out, there was more to his bizarre eating habits than just voracious hunger.

Born in 1772 or 73 in Lyon, France, Tarrare was born in a humble household. During his childhood years, he ate a lot of food and had an unusual appetite for a child his age. When he became a teenager, his insatiable hunger forced his parents to abandon him due to their deprived living conditions. Tarrare toured the country with bandits and started stealing food to satisfy his unending hunger. He later worked as a showman at a travelling carnival, demonstrating his eating skills and wowing his audiences. His food included not just fruits and meat, but also live animals, stones, corks, flint and other items not considered fit for human consumption. In the year 1788, Tarrare shifted base to the French capital of Paris and began street performing, putting his unusual eating habit on display, gaining a lot of notoriety.

Tarrare’s life in the military

When the War of the First Coalition broke out, where European countries fought against French monarchy between 1792 and 1797, Tarrare joined the French Revolutionary Army. But there again, he did not receive enough ration to satisfy his huge hunger and so he began trading for supplies from his fellow soldiers. On one occasion he was admitted to a hospital due to extreme exhaustion, where Tarrare is said to have eaten the pharmacist’s herbal medicinal preparations. To test his desire to eat nonstop, doctors placed an undisturbed meal for fifteen people, which Tarrare consumed within minutes. He is also said to have been experimented upon for eating live animals, which he consumed successfully, swallowing a cat, an eel, snakes, puppies and even lizards on several different occasions.

Some months later, Tarrare returned to service in the army and was employed as a courier. His task was to carry secret military documents and papers tightly tucked inside his stomach by way of ingestion and later retrieval by means of excretion. But after he was caught transporting confidential information and spying, he was severely beaten up by the German forces. He then returned to Paris for good, quit his military profession and sought Dr. Baron Percy’s help to rid him of his abnormal eating condition.

As is evident from his example, Tarrare suffered from a strange case of polyphagia. Some doctors and surgeons even argued that he had hyperthyroidism, which caused patients to eat in very large quantities. It also caused patients to lose weight rapidly, have intolerance to hot temperatures and sweat profusely, which were evident in Tarrare’s case. But since there was no explanation as to why he ate things, unfit for human consumption, the possibility of him suffering from hyperthyroidism was ruled out. Others speculated that one of Tarrare’s amygdala in his brain was damaged. But that did not hold true either, since he showed no signs of mental illness, thus proving again that his brain was healthy like normal people.

Tarrare never threw up his ingested ‘food’ and despite eating all the while, he never gained weight. He did not weigh more than 45 to 50 kilograms, though his skin sagged in the absence of food and appeared stretched out when he had too many things to eat. Tarrare would become sluggish after he had a stomach full to eat, with doctors even admitting to have seen thin vapours rising out of his body and his stomach swelling up like a balloon. He sweated a lot and had a fetid body odour. Tarrare also suffered from chronic diarrhoea. But all these problems did not stop the oddball from eating to his stomach’s content.

Final years of the living glutton

When Tarrare was in the hospital, while his condition was constantly monitored, he is said to have snuck out in the dark alleys looking for food to satisfy his craving many a times. He was under heavy medication and was given a strict diet to follow, yet he ate things out garbage bins, kitchen refuse, sometimes even viscera of dead animals and carrions during the afterhours. On one occasion, he is said to have been caught trying to eat the flesh of corpses in the morgue and on another instance, he was even suspected to have eaten a toddler. This incident got him expelled from the hospital, after which he never returned to Paris.

During his final days, when Tarrare was only 26-years-old, he contracted tuberculosis and his health constantly deteriorated. Within a month after this, he developed exudative diarrhoea, where his body was filled with pus and stomach was lined with ulcers. After he died, his body decayed very quickly, unlike regular dead bodies and gave out an overpoweringly intense stench. Nothing concrete ever came out of what had given rise to such gluttony that Tarrare was faced with in his youth, and the mystery of his creepy and strange eating habits died with him in 1798 in Versailles. Chief surgeon Baron Percy’s original paper on Tarrare’s strange medical condition ‘Memoire sur la Polyphagie’ was published and republished many times before, but nobody till date could explain what caused him to eat in such huge quantities and things that no man can attempt to consume.

Like Tarrare the bizarre glutton, there lived another Frenchman named Jacques de Falaise, who was born in 1754. He too had an unusual capacity for ingesting anything and everything. In the year 1816, he was first hired by the celebrated Parisian magician and ventriloquist Louis Christian Emmanuel Comte to perform this ‘odd exercise’ at his exhibition. Nothing much is known about the sixty years of Jacques’ life, until he came into the limelight with his weird eating habits. Working in a quarry initially, he later started performing in public, putting his extraordinary talent on display. Jacques de Falaise would also swallow live animals like mice, birds, eels, lobsters and other non-consumable items like a rose flower with its stem and thorns, corks, furnace pipes and even cards rolled together. For his performance, Falaise even swallowed a steel sword, about thirteen to fourteen inches long, though never ingesting it completely.

But there was something that set Jacques de Falaise and Tarrare apart. While Tarrare ate to satisfy his unending hunger, Jacques de Falaise was a performer, who ingested items unfit for eating to earn money. Unlike Tarrare, after every solid intake, Jacques de Falaise would consume a specially-prepared wine mixture, the formula of which remained a secret. Experts say this mix helped him with digestion and that this habit of polyphagia was a result of deliberate and habitual practice. A life marked with several accidents during displays, Jacques de Falaise had enough to showcase and in March 1825, he committed suicide by hanging himself in the basement where he worked.

A lithograph depicting Jacques de Falaise in action was designed by the French artist Louis-Marie Lante, engraved by Georges-Jacques Gatine and published by Pierre-Antoine Leboux. The painting titled ‘Jacques de Falaise le Polyphage’ is on display at the Victoria and Albert Museum in London.

“Truth is stranger than fiction,” Mark Twain once noted. But we could never imagine in our wildest dreams that Tarrare’s tale, which seems to come straight out of a horror story, could only be so bizarre.