Tana Toraja in Indonesia: The Celebratory Funeral Ceremonies and the Tree of Baby Graves 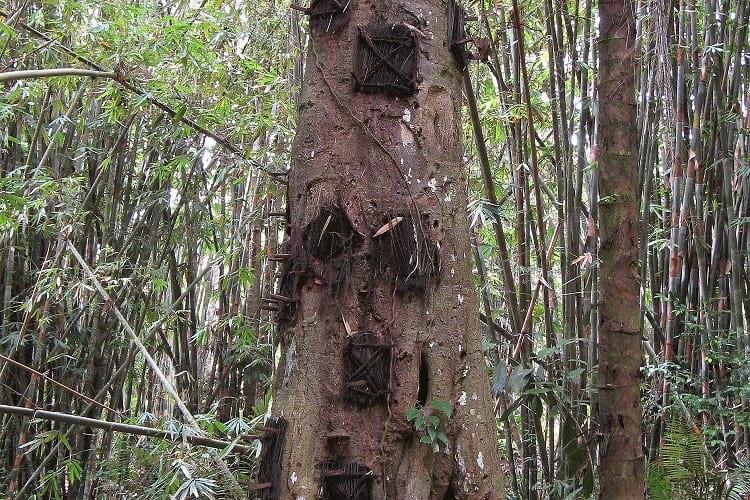 The South Sulawesi Province in Indonesia is home to the Tana Toraja Regency comprising of the native mountain tribe, Toraja. The Toraja people mostly follow the philosophy that all natural things have souls, also known as Aluk (the way). Their animistic belief has been given recognition by the Indonesian government as ‘Aluk To Dolo’ (way of the ancestors). The term Toraja comes from the Indonesian language Buginese word ‘to riaja’, which means ‘people of the uplands’.

In Torajan society, each village is an extended family named after the most important member’s tongkonan, a traditional house. The name of the tongkonan becomes the name of the village and also the primary place for conducting all social events. The distinct feature of a tongkonan is the boat-shaped roof, much like a sweeping arc. Torojans have become famous all over the world, attracting tourists every year, for their detailed memorial services.

The celebration of life and afterlife In Toraja social norms, the ritual of a funeral, known as ‘Rambu Solo‘ is the most important and elaborate event. A Toraja memorial service lasts for quite a few days and is typically attended by several people. The extent of the service is in accordance with the social status of the deceased.

The Aluk religion states that only the upper class can have an extensive feast along with the memorial service. It involves the preparation of a ceremonial site known as ‘rante’ with shelters for the people participating and other things needed for the last rites.

The belief of the Torajans is that death is not abrupt, but an ongoing process towards ‘Puya’, the land of souls. Death hence becomes more of a celebration of life for them and the rituals are performed as a farewell party over days. The body of the deceased is covered with multiple layers of cloth to be kept beneath the tongkonan.

The soul is said to hang around the village till all the rituals are complete and then embark on its journey towards Puya. Till the final ceremony starts, the deceased is laid down on his bed with his head in the west. This is so that whenever the sleeping person wakes up, it sees the rising sun. Family members also visit the sleeping person every day with food and drinks and sometimes sit there to chat.

After a long drawn out funeral ceremony, comes the elaborate burials of the Torajans. The coffin is often put in a cave, in a grave carved in stone, or hung from a cliff. The deceased are adorned with their favourite ornaments and any other possessions that they may require in Puya.

Once the burial is complete, a wooden effigy known as Tau tau is placed outside the cave. Tau taus are placed looking over the land of the village as they are known to protect the village. 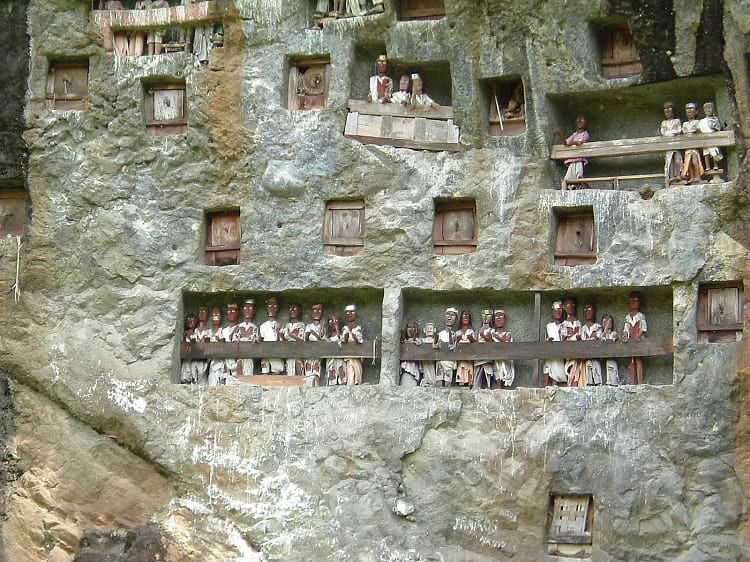 The coffin of a child is hung from a cliff and babies are buried inside hollow trees. This is the smallest burial ground of the Torajan custom. If a baby dies who has not started teething, then its body is placed inside a tree.

A small space inside the trunk of a tree is hollowed out to place the body. The baby is then wrapped in cloth and placed in it. As their belief goes that all natural things have souls, so they believe that the baby becomes a part of the tree.

As the tree heals, the baby is absorbed into the tree and the soul is guided by the winds in the tree to the afterlife. The opening of the baby’s grave is covered with a door made of palm fibre. Several babies can be buried inside one tree.

Every 3 years, the Torajans exhume the dead bodies of their loved ones to wash them, dress them up in new clothes and display them proudly. This is known as the Ma’Nene festival which honours the dead and shows the fact that the dead have not been forgotten. This is their way of showing respect to the dead. Another important ritual during this festival is to repair or replace the coffins for the bodies. This festival has been celebrated every 3 years for centuries now.

The unusual customs and rituals of the Toraja tribe have led to widespread intrigue over their culture. The exhaustive funeral service and other ceremonies pertaining to death have attracted hordes of tourists every year. Anthropologists have shown an increased interest in the practices of the Torajans. Since 1984, the Indonesian Ministry of Tourism has named Tana Toraja the second tourist destination after Bali in Indonesia.

Enjoyed this article? Also, check out “The Island of the Dolls: Nothing Childlike About It“.

Previous Article
The Fascinating Tale of the Lost Treasure of the Beale Ciphers
Next Article
Greenbrier Ghost: When Trial Court was Forced to Record a Testimony from a Ghost