One of the most iconic photographs to emerge from Cambodia is that of an ancient temple with huge tree roots draped over it. This is Ta Prohm. In the Khmer language, Ta Prohm means Ancestor Brahma or Eye of Brahma. Dedicated to the mother of the powerful Khmer king, Jayavarman VII, the Ta Prohm temple is in Angkor in the Siem Reap province of Cambodia.

Around 1181 A.D., Jayavarman VII (1120-1218) ascended the throne of the Khmer Empire and soon established himself as the most powerful monarch of the dynasty. He ruled for 37 years and was a strict adherent of the Mahayana Buddhist faith. After successfully repulsing the attacks by the Vietnamese Chăm Pa Kingdom between 1171 and 1181, Jayavarman VII began rebuilding his war-ravaged capital Angkor. He embarked on an intensive construction program to erect public buildings and religious monuments that would benefit his subjects.

He built the walled city of Angkor Thom near the ruins of the ancient capital Yaśodharapura and included some of the extant buildings of the earlier period into his palace complex. Amongst the other buildings, he constructed was a Mahayana Buddhist monastery and university to the east of Angkor Thom. The temple of Ta Prohm was consecrated in 1186 and the temple of Preah Khan was consecrated in 1191 to honor his mother Queen Sri Jayarajacudamani and his father King Dharanindravarman II, respectively. 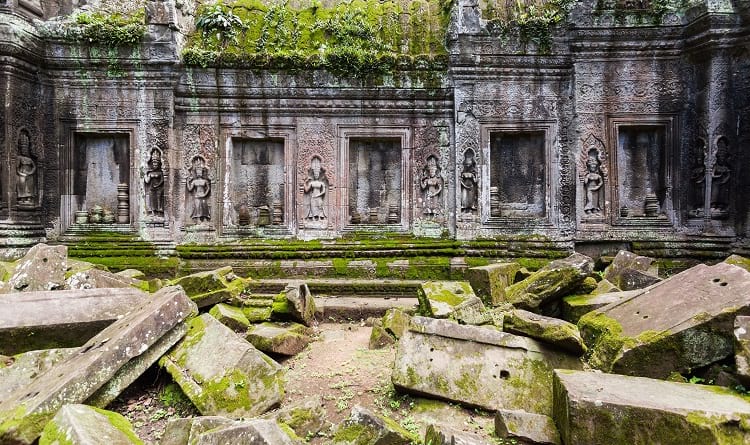 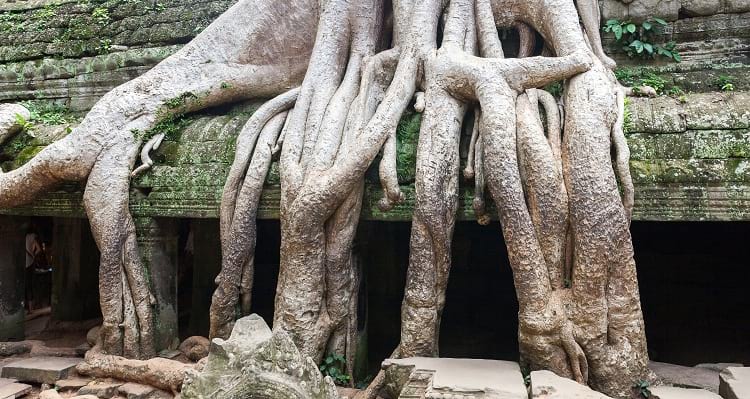 At this time, Ta Prohm was known as Rajavihara, meaning monastery of the king. For over three centuries, the Khmer rulers continuously added to and expanded the temple complex. The site was a lively cultural centre. Various steles inscribed with Sanskrit inscriptions provide information about life at Ta Prohm temple. Along the date of the temple’s consecration in 1186, the steles detail its inhabitants. Around 12,640 people lived in the temple, including 18 priests, 615 dancers, 2740 officials, and 2202 assistants. There was also a staff of 79,365 to maintain the temple complex.

Towards the end of the 15th century, the Khmer Empire collapsed from a combination of different factors such as internal discord, the rise of Shaivism and Theravada Buddhism, wars with the Thai kings of the Ayutthaya Kingdom, collapse of commerce, neglect of public works, ecological disasters such as flooding, and the plague. Angkor and its temples, except for Angkor Wat, were abandoned. The surrounding jungle soon reclaimed Ta Prohm. Green moss began to creep over the stone walls. Strangler fig, kapok or silk-cotton, banyan, and other trees extended their roots and spread their branches throughout the temple complex. 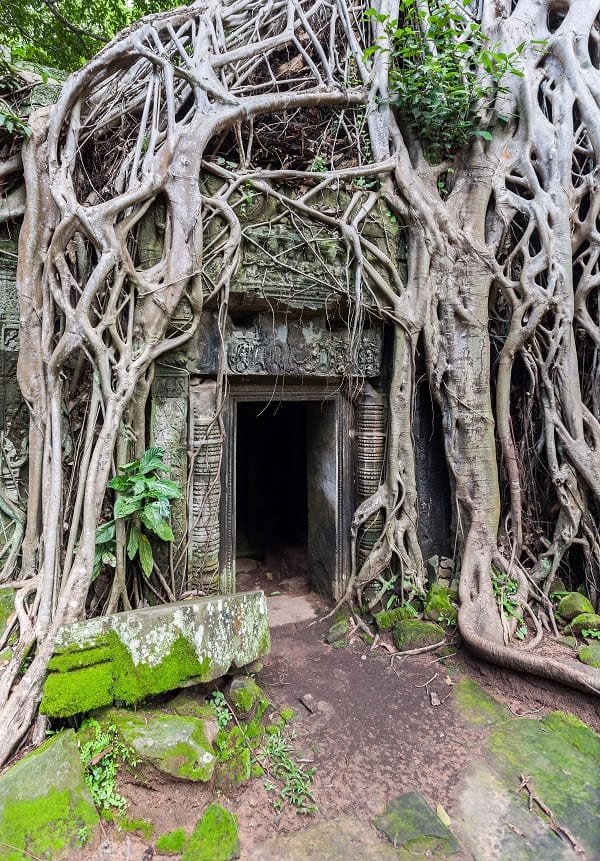 Roots of Tetrameles nudiflora around the entrance of the temple. (Diego Delso / CC-BY-SA-4.0)

Restoration of the Ta Prohm temple

Ta Prohm was not completely forgotten, of course. Curious locals and intrepid explorers continued visiting it. At the end of the 19th century, the French explorer and artist, Louis Delaporte, popularised Angkor with his illustrations of Khmer architecture and art. This inspired French archaeologists to attempt to restore the magnificent monuments of Angkor. At the beginning of the 20th century, the École Française d’Extrême-Orient led the efforts to conserve and restore the temples of Angkor. They found the intertwined stone and tree structures of Ta Prohm picturesque and decided to leave them as they were.

It was necessary, however, to carry out some restoration work to strengthen the foundations and stop further deterioration of the ruins. To protect the area from waterlogging, they also installed drains.

The Archaeological Survey of India, in partnership with APSARA (Authority for the Protection and Management of Angkor and the Region of Siem Reap), has reconstructed some parts of the temple complex. They cleared paths through the jungle to allow entry from the west side and exit from the east. Some areas of the temple are scattered with the remains of sculptures and balustrades and are impassable. Wooden walkways and platforms with roped railings were installed in the accessible areas to limit damage from visitors. 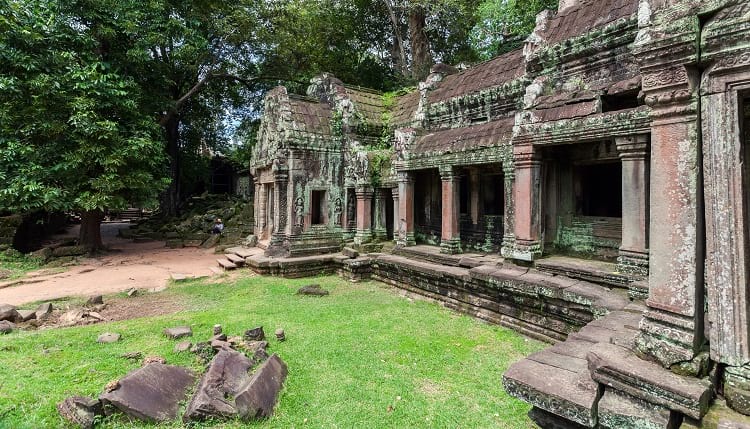 The architecture of the Ta Prohm temple

Ta Prohm’s architecture is in a flat Khmer style, and the entire temple was built without the use of any type of mortar.  The temple complex is set closer to the western side of the enclosure wall and faces towards the east. All the low temple buildings stand on one level. The temple has a central sanctuary which contains the stone statue of the main deity, Prajnaparamita, the personification of wisdom. This deity was supposedly modelled after the king’s mother. The central sanctuary is surrounded by five enclosures that get progressively larger. The outermost enclosure has dimensions measuring 1,959 by 3,281 feet.

There are 260 lesser deities housed in sanctuaries surrounding the central one. The tower of the central sanctuary forms the centre of a quincunx with the corner towers of the first enclosure. The first, second, and third enclosures have galleries. In the third enclosure, there are two temples; the one in the northern side is dedicated to the king’s guru, Jayamangalartha, and, the one in the southern side, to the king’s elder brother. There were moats on both sides of the fourth enclosure. The fifth enclosure is said to have been the site of a town which housed thousands of people who managed and maintained the temple.

In the 13th century, the Khmer rulers enhanced the gopuras – that is, the ornate entrance towers at each of the four sides – with face towers like those at the Bayon temple. The gopuras of all the enclosures are connected by passages leading to the central sanctuary. Most of the buildings in the inner enclosures were later additions. These include dance halls and libraries.

Not many of the stone carvings and bas reliefs at Ta Prohm have survived to this day. The successors of Jayavarman VII did not share his belief in Mahayana Buddhism and had no interest in preserving the artwork at Ta Prohm. Jayavarman VIII, in particular, was notorious for destroying Buddhist relics created during the reign of his predecessors.

Some of the bas reliefs depicting scenes from Buddhist mythology can still be seen on the temple walls. One such scene shows Prince Siddhartha, who eventually became known as the Buddha, departing from his father’s palace to lead a life of asceticism. There are also some remains of stone carvings of female deities, meditating monks, temple guardians, and apsara dancers. Images of the Buddha can be seen in niches along the inner wall of the passage leading to the first enclosure.

The king ordered the construction of 566 clusters of stone houses, 286 brick houses, and 3,140 villages. The details of the temple’s wealth are also impressive. There were 500 kilograms of golden dishes, 35 diamonds, 40,620 pearls, 4,540 precious stones, 876 veils from China, 512 silk beds, and 523 parasols. Some people speculate that this information may have been vastly exaggerated to glorify the king.

The Stegosaurus of Ta Prohm

One rather intriguing thing at Ta Prohm is a wall carving of a Stegosaurus. At least, it looks very much like a Stegosaurus, and that has led quite a few people to conclude that perhaps the stone carver might have seen one alive in the 1180s or earlier. This is a strange logic, as there are also representations of mythical creatures on the temple walls and nobody has yet suggested that the stone carvers saw those live as well. In any case, the carving might very well be that of a rhinoceros or a chameleon. 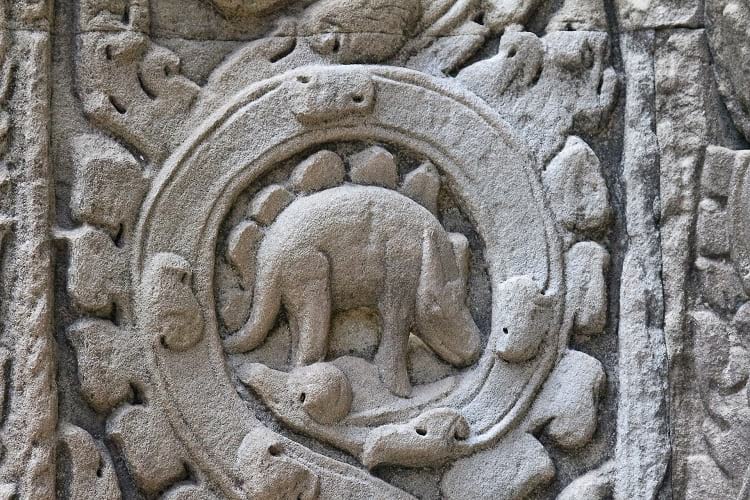 UNESCO listed Ta Prohm as a World Heritage site in 1992. Ta Prohm remains one of the most popular temples in Angkor. Visitors are left mesmerised and awestruck by its serene beauty, especially in the early morning light. They are more fascinated by the sight of the majestic Spung trees that continue growing as one with the stone ruins, and this photogenic scenery is the main attraction of this temple.

Enjoyed this article? Also, check out “Batu Caves of Malayasia – The Largest Shrine to Lord Murugan Outside India“.

Previous Article
Eugen Sandow: The Child Who Became the Father of Bodybuilding
Next Article
In Tsarist Russia Members of the Secret Skoptsy Sect Believed in Self-Castration