Submarine Communications Cables: All That It Takes to Keep the Internet Up and Running 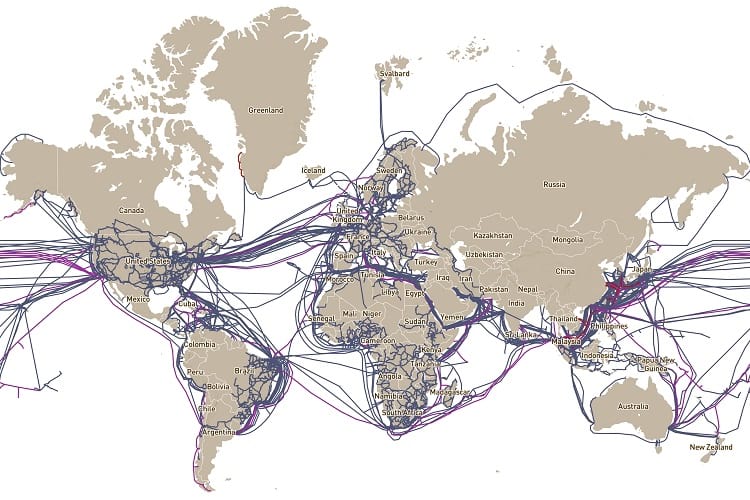 Map showing how submarine communications cables are connected across the globe. (networkatlas)

Today, “cloud” is synonymous to everything online in common parlance. However, unbeknownst to us, most of the data we are accessing is shuttling across the world through an intricate network of cables under the ocean. This massive system of Submarine Communications Cable connects every continent, except Antarctica, and carries everything from emails and videos to the most encrypted documents.

Submarine communications cable: what are they?

Submarine Communications Cables are primarily made of strands of glass as thin as a hair, known as fibre optics. Data is transmitted via these cables at the speed of light, through wavelengths, across huge distances without obstruction. Each strand is capable of carrying an enormous amount of information, with over sixty 400 GB per second channels across a single strand of fibre-optic cable. To put it into perspective, each strand is capable of conducting 375 million telephone conversations at the same time.

The number of fibre optic strands within each cable is variable, depending on the distance it needs to cover. A trans-Atlantic cable can have around 4 to 8 strands, whereas a cable spanning the entire continent of Europe would require as much as 200.

Layers of protection for optical fibers that will be submerged in the ocean. (Oona Räisänen / Wikimedia Commons)

Submarine communications cables are very thin, measuring to a maximum diameter of 60mm. They are composed of a copper core that transmits power to signal boosting equipment and a variety of combination steel armour wires. Polyethene insulation waterproofs the cables. According to TeleGeography, there are approximately 420 cables running across the world today, the entire network spanning more than 700,000 miles. These cables might be running across the ocean, or along the coast of a continental shelf. Some cables are lying as deep as the height of Mt. Everest above the ground.

Procedure for installing cables under the sea

The submarine communications cables are generally buried under the sea floor. This is especially true on the shallow region around continental shelves where they might be damaged during fishing, or by ship anchors.

There are multiple methods for installing the cables in this manner, but the most popular one is using a cable plough. Towed by a cable ship, the plough lifts up a section of the seabed, allowing the cable to slide in. The chunk of the seabed is then placed on top of the cable, effectively burying it. The depth at which a cable is buried depends on a lot of conditions, including the texture of the seabed. 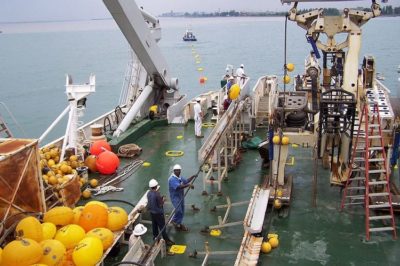 On a very hard and rocky floor, it is impossible to plough a cable through. In such circumstances, the cable is padded with additional protective layers. Increased armour when constructing the cable, covering it with graded coatings, and polyurethane or concrete casings, etc. is usually the way out. If the cable is laid on the sea floor extremely deep into the ocean, excess padding around the cables is usually not necessary.

Evolution of the submarine communications cable

The modern submarine communications cable network can find its origin in the telegraph system. The first such cable was a trans-Atlantic one between Ireland and Newfoundland that had taken four years to build and was completed in 1858. The first non-test message was a 509-letter message to President James Buchanan from Queen Victoria that took over 17 hours to transmit. It might seem like an eternity compared to today’s emails, but it was much faster than the contemporary alternative- ships. This cable, however, lasted barely a month.

After six years, another line was finally set up across the Atlantic to transmit telegraph messages. Since then, an extensive network of submarine cables has been established across the oceans of the world. These telegraph cables were later linked to telephone cables, and eventually, the fibre optic cables that the Internet depends on were developed. 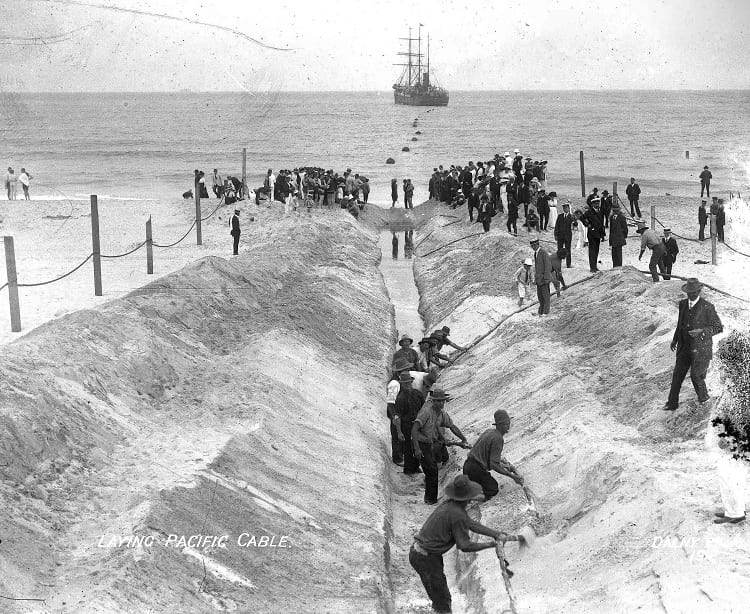 Submarine communications cables were originally point-to-point connections. However, the evolution of SBUs, or Submarine Branching Units, allowed a single cable system to serve multiple destinations. Today’s fibre optic cable networks have the fibres arranged in self-healing rings and are sectioned to follow different routes under the ocean. Another kind of network developed is the ‘Mesh Network’ which employs fast switching equipment to transfer services across paths. This is useful as even if a specific path is rendered inoperable, there is a negligible effect on the higher-level protocols. The Mesh System allows for a multitude of available paths between two points, making it unlikely for the entire network to crash at once.

Shark bites to espionage – the various threats to undersea cables

One of the biggest threats to the submarine communications cables is presented by sharks and certain fish. Barracuda, sharks and similar fishes have had a long history of biting these undersea cables, as can be seen from teeth embedded in cable sheaths. This has often led to the cables being seriously damaged, exposing the power conductor within the ripped insulation to the seawater. Communication cables are being modified to overcome this. Google, for instance, has been helping build a kevlar-like protective layer to drive back aquatic creatures. Undersea avalanches have also been known to damage cables. The Newfoundland earthquake in 1929 had triggered a massive undersea avalanche that had destroyed multiple trans-Atlantic cables. The Hengchun earthquake in 2006 had similarly wrecked the cables around Taiwan.

Another major factor that causes cables to malfunction is human error. Ship anchors and fishing trawlers have often damaged submarine communication cables, especially along the continental shelves. This can be devastating for developing nations with few links to the global Internet. Such shipping related disturbances had caused two instances in a single month back in 2012. The damaged cables connecting East Africa to the UAE and Europe affected at least nine countries. Regardless, damages to communication cables have reduced in recent times, since cables are now usually buried under the sea-bed.

During wartime, cables were often intentionally cut off by enemy forces to isolate the region. In fact, fibre-optic cables have always been a vulnerable target for espionage and surveillance efforts. During the Cold War, the NSA-run operation ‘Ivy Bells’ used these cables to tap into Soviet naval bases. Edward Snowden, the infamous NSA whistleblower, had revealed that the NSA still used the fibre-optic cables for global surveillance.

How are these cables repaired?

Submarine communication cables are fixed by bringing the damaged segment to the surface with the help of a grapple. A new segment is fitted in its place. Repaired cables are generally longer and are laid in a U-shape on the ocean-bed. If the cables are close to the surface, they are generally repaired on a submersible. Ports near cable routes often have specialized ships for cable repair on stand-by. A submarine cable being repaired by a private marine engineering company. (The Castle Group / Wikimedia Commons)

Since the fibre-optic cables used today are extremely small in diameter, they hardly cause any disturbance to the aquatic ecosystem or the sea-bed itself. The only exception is during installation and repairs. Then too, a very small perimeter is affected. Its negligible impact on the environment is recognised by the Joint Nature Conservation Committee (JNCC) and Natural England, the conservation advisors of the UK Government. They have thus allowed cables to be laid even within Marine Conservation Zones.

Enjoyed this article? Also, check out “Optical Telegraph: Communication Before the Internet“.

Previous Article
Rape of Nanking is One of the Most Brutal and Forgotten Genocides of 20th Century
Next Article
Life of Ishi: The Last Surviving Member of the Yahi Tribe