Before, during and after the high-altitude nuclear test. (Wikimedia Commons)

From 1958 to 1962, the USA conducted a series of high-altitude nuclear tests over the South Atlantic Ocean, the Pacific Ocean, and the Nevada National Security Site. The purpose was both to understand the effects of high-altitude nuclear explosions and to counter Soviet nuclear testing. Previously, both the USA and the Soviet Union had agreed to stop conducting nuclear tests, but, after a hiatus of three years, the Soviets resumed their testing. The USA, in retaliation, carried out a series of nuclear test operations codenamed Hardtack I, Argus, Hardtack II, Nougat, Sunbeam, and Dominic.

The entire program took place in cooperation between the Defense Atomic Support Agency and the US Atomic Energy Commission. Experts from the Explorer 4 Space Mission and the Lockheed Aircraft Corporation also participated in the operations.

Operation Dominic carried out 31 nuclear tests and included amongst these were five nuclear tests collectively grouped under the codename Operation Fishbowl. The Starfish Prime high-altitude nuclear test was one of these.

There were only three tests planned, to begin with – Bluegill, Starfish, and Urraca. The first test, Bluegill, failed and so they tried it unsuccessfully on two more occasions, renaming it Bluegill Prime and Bluegill Double Prime. The first Starfish trial also failed, so the researchers set up another attempt and called it the Starfish Prime nuclear test. If that had failed as well, they would have named the third attempt Starfish Double Prime.

These failures, by the way, were not without consequences. The resulting debris and radioactive materials from the warheads caused widespread contamination in the area that persists after so many years.

The Starfish Prime test came next and it worked. The Thor Missile launcher successfully dispatched the nuclear warhead into the sky on 9 July 1962 from Johnston Island in the Pacific Ocean. The war detonated at an altitude of 400 kilometres to the southwest of Johnston Island. From the data collected in the aftermath of this detonation, US American researchers were able to compile a pretty clear and grim picture of the outcome of using nuclear weapons.

The outcome of the Starfish Prime test

The two immediate outcomes of the Starfish Prime were the generation of an immense electromagnetic pulse (EMP) and the appearance of spectacular auroras both in the northern hemisphere where the detonation happened and across the equator in the region around the Samoan Islands in the southern hemisphere.

Another outcome, which the researchers discovered afterwards, was the formation of artificial radiation belts around the earth. The sky after the Starfish Prime high-altitude nuclear test. (US Gov)

The resulting electromagnetic pulse (EMP) from the Starfish Prime detonation caused damage in the environs of Johnston Island and proved to be so far-reaching that it even affected areas several thousand kilometres away in Hawaii. The EMP knocked out streetlights, made electronic instruments unusable, caused electronic equipment to malfunction, and damaged a telephone microwave link, severing phone connections in Hawaii.

The Starfish Prime nuclear detonation did not produce any audible sound, but, instead, lit up the sky in the northern and southern hemispheres with a spectacular light show. The sky glowed with bright orange, red, yellow, and white auroras, and the light was so intense that it, apparently, even provided sufficient illumination for the New Zealand Airforce to conduct the anti-submarine manoeuvres that they were at the time carrying out. The auroras remained visible in the evenings for several days. 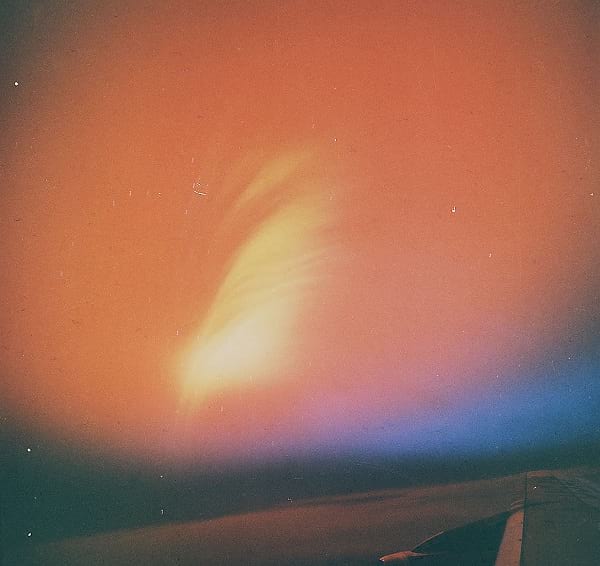 Photo of the aurora taken from an aircraft after the test. (U.S. Air Force)

The researchers had expected this phenomenon to occur, going by the results of the previous high-altitude nuclear tests that they had carried out, and the word had leaked out to the public in advance. Many hotels in the area had already opportunistically advertised ‘rainbow bomb rooftop parties’ in the local papers to lure in guests to come to view the sky show.

What exactly caused these auroras though?

When the detonation happened, it released high-energy beta particles and heavier debris ions that scattered in all directions. The charged beta particles and ions encountered hydrogen and oxygen atoms in the earth’s atmosphere, and they transferred their charges to these atoms, causing the now-charged atoms to glow in a variety of colours and give rise to the aurora phenomenon. The red light of the auroras came from charged beta particles encountering a high concentration of oxygen atoms, altering to a green light as the oxygen atoms disperse. Encounters with high concentrations of nitrogen atoms produced blue light.

Some of the charged beta particles travelled at high velocities along the earth’s magnetic field lines, following the arched trajectory of these lines to reach the southern hemisphere. Due to this, the auroras were visible in both the northern and the southern hemisphere at around the same time. The debris ions were comparatively slow travelling along the magnetic lines and led to delayed auroras.

Some of the high-energy beta particles and debris ions remained trapped in the atmosphere along the earth’s magnetic lines and gave rise to artificial radiation belts around the earth. This radiation persisted in the atmosphere for a long time and, in the months following the detonation, caused the destruction of several communication satellites belonging to the United State, the United Kingdom, and the Soviet Union.

Purpose of the testing

The main purpose of the US nuclear tests was to counter Soviet testing and stay ahead in the nuclear armaments race between the two countries. Another purpose was to see if, by using nuclear warheads, the US military could disrupt the Van Allen belts. These are strong radiation belts that occur naturally in the inner region of the earth’s magnetosphere. They protect the earth from buffeting solar winds that would otherwise decimate all life on the planet. The US American scientist, James Van Allen, discovered these natural radiation belts in 1958.

Soon after this discovery, the Greek scientist, Nicholas Christofilos, came up with the idea of conducting high-altitude nuclear tests to create artificial radiation belts that, like the Van Allen belts, would surround the earth. This experiment wasn’t out of mere curiosity, but to find out if, by such high-altitude nuclear detonations, it would be possible to direct and deploy both the natural radiation of the Van Allen belts and the artificial radiation against any country on earth that the USA considered a threat to their hegemony. It was a barmy idea, but both the US military and James Van Allen endorsed it with great enthusiasm and, of course, no regard for any potential damage to the environment and human life. When it comes to cooking up Mad Hatter schemes of destruction and annihilation, the US military’s thinkers and planners and their supporters are second to none. James Van Allen called it the “greatest geophysical experiment” in the history of humankind.

Enjoyed this article? Also, check out “The Manhattan Project: The Making of the First Atomic Bomb“.

Previous Article
Ota Benga: Tragic Story of the Last Known Human Exhibit at the New York Zoo
Next Article
Nemi Ships, the Floating Palace, and the Lynching of Fanatic Dictators