SS Baychimo: The Phantom Ship That Haunts the Arctic Waters 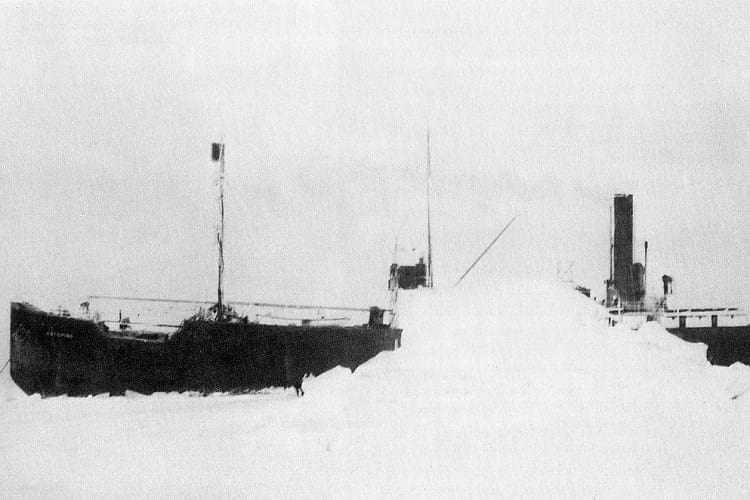 The seas and oceans of the world are replete with wonders, mysteries and many other instances which are just plain and simple strange manifestations. Bizarre as it may sound thoroughly are the occasional appearances of phantom ships or ghost vessels, drifting and wandering aimlessly amidst the sea in the absence of any visible living crew. Haunting tales of ghost ships spread through the legends of the seas and oceans over centuries and these genuinely inexplicable occurrences have turned into a talking point of many discussion forums in present times.

SS Baychimo was a steel-hulled ship that was built in Sweden in the year 1914. Its original name was Ångermanelfven. The ship was initially used by a German shipping company along the trading routes between Sweden and Hamburg. After the World War I, the Hudson Bay Company of the United Kingdom took over the ownership of this steam-powered cargo ship in 1921, following Germany’s war restitution for the shipping losses that they incurred to the British shipping corporation. Hudson Bay Company re-christened the ship SS Baychimo.

Based in Ardrossan in Scotland, the ship carried out countless successful voyages for Hudson’s, mostly transporting cargo by visiting different trading posts and collecting and ferrying various cargos like furs, pelts sugar, tea, tobacco, and weapons along the Canadian coast, to and from the Arctic region across the freezing, icy-cold waters of the Arctic Ocean. The ship was primarily used for the commerce and trading provisions for the Inuit settlements in Alaska. The ship likewise conducted several voyages carrying passengers and cargos to Alaska and British Columbia.

On October 1, 1931, Baychimo was on the closing run of a routine transport voyage to Vancouver, filled with recently acquired valuable furs. However, the crew couldn’t account for the fact that winter had set in earlier than usual that year. During the course of the journey, the ship along with its crew proceeded, even after being hurled around by the frigid blasts of the wind and grasped by the bitterly cold and numbing temperatures, resolved to deliver their valuable payload.

Even as they progressed through the frightening weather and the menacingly turbulent waters, an unforeseen vicious blizzard emerged out of nowhere and descended on the ship. The blizzard gripped the ship in a cage of ice. As the vulnerable crew looked on, Baychimo was trapped in perpetual snow.

The ship’s captain Sydney Cornwell and the crew confined inside the ship had to wait for the storm to cease. Days and weeks passed by, but the storm showed no sign of abatement. The only city close by was Barrow in Alaska on the northernmost point of the United States. But it was too far to even sail through and reach there in the vigorously blowing snow and strong winds.

At a loss to proceed with their voyage, and apprehending a probable sinking ship, the captain commanded the crew to briefly abandon the ship and make headway to the town of Barrow by foot, which was around a mile of shifting, deceitful ice sheets away. They reached and took refuge in Barrow for a couple of days before coming back to check on the condition of the forsaken ship.

On their arrival, they were pretty surprised to discover that the vessel had broke free from its sub-zero prison in their absence and was drifting aimlessly about the area. The crew chose to wait until the time the ship could be retrieved and anchored. They made a temporary camp nearby and kept a watch on the ship. Unfortunately, the terrible weather didn’t come to a halt.

On October 8, the ship once again was tangled up in ice. This time, the ice was more stubborn and exhibited an immeasurable reluctance to a melt-down. The ship stayed around ensconced in its icy-cold, freezing lock-up with absolutely no hint of a reprieve anytime soon.

Till October 15, the ship remained immovable and snowed under. Just when the storm subsided a bit, the Hudson Bay Company took immediate action and sent a rescue operations team to evacuate the crew. 22 members were salvaged and airlifted to safety in Barrow. The captain and 14 other brave crew members stuck around refusing to leave their ship deserted with the cargo.

Thereafter, they disembarked the ship, built a makeshift camp and decided to remain camped out on the ice in the proximity of the stranded ship half a mile away on the beach despite the severe impact of the punishing storm. They received emergency provisions from the Hudson Bay Company and resolved to even wait the entire winter out there if at all it demanded so.

On November 24, another ferocious snow-storm hit and swept across the area and the snow was so dense and heavy that visibility was completely lost in their whirling clouds. The campers who had stayed behind entirely lost sight of the ship and once the storm weakened the following day, the worst fears they had dreaded came true. Baychimo could nowhere be seen. The ship had simply disappeared from the spot.

Assuming the severity of the tempest that had struck them so hard and the fact that Baychimo was untraceable in the vicinity, the captain and the team suspected that the ship definitely had wrecked apart and plunged into the Arctic. The despondent crew then decided to break their camp and make a beeline towards civilization.

However, much to the crew’s astonishment, a week later, a native Inuit seal hunter dismissed the idea of Baychimo’s sinking and informed the captain about noticing the ship drifting in the freezing-cold waters around 45 miles away from the place, from where it was trapped in ice and subsequently abandoned. The captain, to a certain degree, was hesitant to fight the snows to attempt and discover the ship again. But, he assembled his crew and in fact found Baychimo precisely in the area the hunter had portrayed.

By that time the ship had undergone massive damage. So the captain was afraid and surmised that it wouldn’t be navigable any longer and would disintegrate and sink anytime soon. Therefore, the crew frantically collected the cargo of furs and got everything (including the captain with his crew) airlifted out of the territory. The ship was left stranded to its inescapable providence.

Despite the Captain’s belief that the ship wasn’t any longer seaworthy, Baychimo was clearly much more robust. It did, in fact, survive the harsh and raging winter, defied all expectations and conjectures and was spotted 250 miles away, several months later. In this way, it went down into the chronicles of the sea legends as the “Ghost Ship of the Arctic”.

People started reporting their experiences of getting to see the ship cruising along the chilly north Atlantic waters, absolutely intact and apparently unmanned. A dog sledger heading towards Nome in Alaska had the first glimpse of the ship, forlorn and close to the shore. The incidents of sightings of Baychimo started gaining ground from that time onwards.

The empty ship was claimed to be seen gliding silently across the Arctic Ocean. Baychimo was unusually and whimsically spotted numerous times, sometimes near to the shore, at other times far out in the sea. It was also distinctive in alternating between open water and ice trappings in ridiculously disparate locations. Multiple efforts were made to recover the ship but in vain.

Notwithstanding the sightings, there were people who even attempted to approach and board the ship, just for it to be uncannily elusive. A group of Inuit that once boarded the phantom ship in the year 1933 for shelter as it was stranded in ice, wound up being trapped inside its walls for 10 days as an abrupt, furious storm started seething outside.

In 1939, following another botched attempt to board the ship, Baychimo dissipated into the eternally frosty and frigid vastness of the Arctic for the next 23 years. It was suspected that the derelict vessel had, at last, come up short on whatever power that propped it up over these years and ultimately sunk.

Yet in March 1962, another group of Inuit saw the legendary SS Baychimo, the “Mysterious Ghost Ship” cruising along, adjoining the coastline of the Beaufort Sea in the Arctic belt. Much to everyone’s stupefaction, the ship had come back from wherever it had traversed to on an unmanned voyage. The perplexing ship was subsequently spotted for a number of times until 1969, 38 years after its abandonment, when it was seen jammed-up in an ice pack between the Icy Cape and Point Barrow in the Chukchi Sea. It would be perhaps the last time anyone would’ve encountered the ship. At the time when a rescue team arrived to explore and investigate the report of 1969, it had receded from the view by then. No one has seen the ship since then.

In 2006, the Alaskan government commenced a project, formed a search team, and proposed an exhaustive hunt to unearth the mystery of “the Ghost Ship of the Arctic” and discover Baychimo back, whether still floating along or lying lifeless on the ocean floor. But all their efforts too went futile. A decade has passed, and in spite of many comprehensive and orchestrated all-out efforts, nothing was found.

The destiny of the Baychimo and the cargo, which still supposedly is in its clasp, immaculate and untouched, remains obscure. What exactly happened to the ship? Did the sea at long last claim it? Or was it recovered without anyone having a whiff of it? Or is it still out there slicing through the Arctic waters on its eerie odyssey with some indecipherable purpose of its own? Until it rises up from its hiding horizon to be sighted again or someone uncovers the wreckage, a definitive fate of this phantom ship of the Arctic will stay outside our ability to comprehend.

Previous Article
Las Lajas Sanctuary: A Church with a Mysterious Mural Nobody Can Explain
Next Article
Path to Blood and Insanity: Uncovering the Mystery of the Hope Diamond