Space Advertising: The Race to Advertise in Outer Space NASA astronaut Dale A. Gardner jokingly holding a “For Sale” sign for the satellites behind him. (NASA)

Outer space begins from just over 80 km above the earth’s surface. For advertisers, it is the final frontier for capturing and holding consumer attention. People around the world have grown accustomed to and jaded about seeing or hearing advertisements in all the usual places – television, radio, movies, roadside banners, billboards, magazines, books, and so on. They may even ignore these advertisements with repeated viewing.

Advertisers hope that it won’t be the same case if they start advertising in outer space. Although, if you really think about it and consider human nature, there is no reason why the outcome should be any different. It is true that an advertisement spread out in outer space will have a wider reach. It may be seen by billions of potential consumers, no matter where they are located on the planet, no matter if they have digital or electronic devices or not.

There were plans to put up lights on a formation of satellites in the low earth orbit to mimic a billboard, but these were shelved for various reasons. The illumination from the advertisements would have shone as brightly as the moon, obstructing astronomical observations. There would have been an on-going risk of collision with other satellites, spacecraft and also the risk of being hit by meteorites. Such collisions could lead to the adding problem of space debris.

In 1993, the United States-based company Space Marketing Inc. attempted a space billboard project that flopped. Since then, no other company has attempted what many people consider to be a ludicrous idea. Even so, the US government has banned all billboard advertisements in outer space that can be seen without the aid of telescopes and other devices. There are also several international organizations that are campaigning to put limits on obtrusive space advertising.

The French Ring of Light project, meant to celebrate the 100th anniversary of the Eiffel Tower, would have competed with the moon for sheer brightness. The project was to have an inflatable ring with a circumference of 24 km and this ring would have had reflective Mylar balloons attached to it at various points. If the project had been carried out, the organizers would have launched the ring to a height of over 800 km. Fortunately, the project was abandoned and will not be ruining our view of the moon.

Meanwhile, Coca-Cola and Google proposed to use the moon itself as a billboard. They planned to use high-powered lasers to beam their logo onto to the moon’s surface. Technological and legal challenges ended those plans.

Then there was the Znamya project that many people considered to be an advertisement for the Russian space agency. The project launched satellites to direct sunlight to the Arctic area and these satellites also to lit up some areas of Europe. The Znamaya 2.5 project, which could have lighted up areas in the US, was abandoned after it failed to launch.

Advertising by product placement and publicity stunts have seen some success in the outer space advertising arena.

In 2000, Pizza Hut bought advertising space on the unmanned Proton rocket that Russia launched to carry the Zvezda module to the International Space Station. The new 30-foot Pizza Hut logo was painted on the side of the rocket and got the company noticed by a lot of people around the world. The next year, Pizza Hut delivered a 6-inch salami pizza in a vacuum-sealed container to the International Space Station. The first pizza to be eaten in space had to undergo several rounds of testing to meet space food standards. The free press coverage of the event and the details of all the planning and preparation for it was worth millions of advertising dollars to Pizza Hut. Plans to develop an outer space food delivery service are, however, nowhere in sight.

Other famous publicity stunts involved Kodak having their logo and a slogan painted on the durability testing material on the outside of the International Space Station and Pepsi having a cosmonaut float a replica of their soda can outside the Russian Mir space station. The cost of these stunts varied from half a million dollars to over five million dollars.

The Japanese reporter, Toyohiro Akiyama, was the first journalist to go on a spaceflight in 1990. The Tokyo Broadcasting System (TBS) paid around $10 million to the Russian space agency to send him on the Soyuz TM-11 expedition to the Mir Space Station. TBS also had their logo painted on the Soyuz rocket. Aware that TBS would receive enormous publicity from this, other companies like Sony, Otsuka Pharmaceutical, and Unicharm also availed of the opportunity to place their logos on the launch shroud of the rocket. 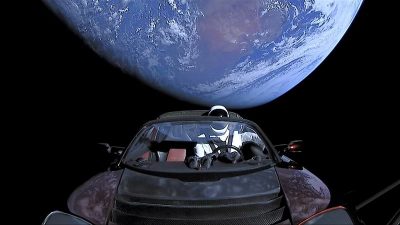 In February 2018, Elon Musk’s Tesla Roadster was selected as a dummy payload on the Falcon Heavy rocket when SpaceX launched it for a test flight. The rocket put the car into a heliocentric orbit. The onboard camera provided a livestream of the event for over four hours and millions of people viewed it. It turned out to be a great marketing stunt for Tesla’s cars as well as publicity for SpaceX’s space exploration ventures.

The 1960s and 1970s saw brands like Pillsbury and Tang promoting their products as being used by astronauts in outer space.

In 2015, the South Korean carmaker, Hyundai, released an online video showing 11 Genesis cars making an image with their tire tracks on the Delamar dry lake bed in the Nevada desert. The image spanning 5.5 square kilometres was filmed by the company to be a message from a daughter to her father who saw it from the International Space Station. The millions of views that this emotional story got increased Hyundai’s brand value.

The Axe brand of Unilever SA, assisted by the astronaut Buzz Aldrin, held a contest in 2013 to give people a chance to book seats on commercial space flights organised by the Netherlands-based Space Expedition Corp.

Legality of advertising in outer space

The 1967 Outer Space Treaty states that activities planned in outer space, which includes the moon and other bodies in space, should not cause any harm or interfere in the peaceful exploration of outer space. There are no specific laws regarding using satellites or the moon or anything else in outer space for advertising purposes. Other than the US ban on obtrusive billboards, there are no national laws regulating advertising in the space industry. The advertising business has laws relating to how true the claims made by advertisers about their products are, but there are no laws about how true the stories used to sell the products can be. It may be possible for companies to use laws about unfair competitive advantage to prevent other companies from using outer space as an advertising medium.

Individuals and institutions, who participate in competitions for developing space vehicles such as Google Lunar X PRIZE, plan on getting the necessary funding from sponsorship deals with large international brands. Private space exploration companies, as well as national space programs with increasingly limited budgets, are also looking at ways to raise funds. The success of some of these publicity stunts may encourage them to get funding from consumer product companies willing to pay for delivering their own branded products into outer space.

Other companies can pay to have their logos placed on equipment used on spacecraft and satellites. Companies can also launch their own branded payloads into the International Space Station, film the launch and distribute the video online to get publicity for their experiments and research. This type of advertising is still very expensive, however, and is not likely to become ubiquitous anytime soon.

Advertisers are always on the lookout for unique and entertaining ways to market products and services, and no one can predict what forms of advertising could become possible in outer space.