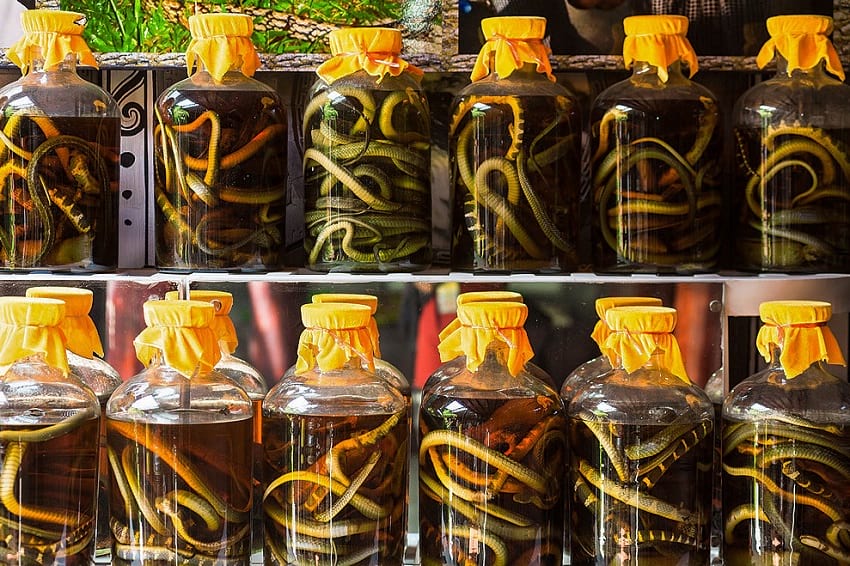 Man’s tryst with snakes is as old as 10,000 BCE. Be it in the form of mortal fear, awe, astonishment, or curiosity. That which doesn’t kill us makes us strong, said Friedrich Nietzsche. A serpent with all wherewithal to kill is served to you as a drink. But does it make you strong?

Caters to man’s craving for bizarre

There is a growing concern, worldwide, to conserve wildlife, including endangered snakes. Yet the wild and weird fascinates man in his never-ending search for health and vigour. Wine/alcohol, seasoned with snake flesh, is one of such fascinations. Taking it is justified on the grounds of medicinal properties and a unique flavour.

Hyped as tonic and miracle drug

Like placebo effect of a fake drug, notions and myths about snake wine fuel its market demand. It is touted as a cure for rheumatism, migraine, sciatica and many other ailments. It is also passed as an aphrodisiac – a sexual stimulant. Wildlife being a potential source of disease to humans doesn’t seem to be an issue. The lovers of snake wine go for it, even illegally, come what may.

Made by dropping a snake in alcohol

Another way is a short cut; doesn’t require marinating the snake body. Blood, bile or beating heart of a freshly killed snake is put into a ready-to-drink glass of wine or alcohol. Taken as a one-shot, this is another way to get high on snake spirit.

Other reptiles and arachnids are also used to prepare snake wine. (Kiran Jonnalagadda/Flickr)

Poisonous snakes; their flesh, and the poison, are used in traditional Chinese medicine. It is argued that the alcohol content of wine neutralizes poison and makes it safe for the consumer. Yet, it is advisable to use non-poisonous snakes for winemaking. There have been instances of snakes raising the head and biting the unsuspecting handler of the wine jar. Additionally, poisonous snakes are just about 7% of the snake population, and King Cobra is already taken in the IUCN’s red list of threatened species, hence the use of non-poisonous snakes is recommended. Inimical to the welfare of snakes

Even as the killing of snakes is decried world over, snake wine isn’t. It sells well globally and it is here to stay. Till a better sense prevails, and snakes are spared the commercial use they are put to. That alone would signify well for the health of the eco-systems on earth.

Previous Article
This is the World’s First Apple Computer and It Was Released in 1976
Next Article
Tree of 40 Fruits: A Patchwork Canopy of Myriad Fruits