The Amusing Tale of Sinbad – The Sailor Dog Sinbad with his crew on Campbell. (USCG Historian’s Office)

As children, we were often told the stories of Sinbad the Sailor. No matter how amusing they were or are, we all know that they are mere fiction. But there is another story of a ‘real’ Sinbad who also happens to be a sailor full of valour. But this time it’s an incredible tale of a ‘dog’.

Sinbad was the name of a mix breed dog that rose to fame when he became the mascot of the US Coast Guard. Sinbad served an 11-year long period service at the USCGC Campbell, which patrolled the Atlantic waters and helped the Allied army in the Second World War. During his valuable service period at USCGC Campbell, he frequently shuffled between promotion and demotion. How did a dog become a sailor?

Sinbad’s journey as a sailor began unintentionally. In 1937, one of the USCGC  Campbell’s crew members, A.A. “Blackie” Roth, bought a puppy as a ‘goodbye’ gift for his girlfriend. What he forgot was that his girlfriend’s landlord had a ‘No Pets’ policy so she could do nothing but refuse. After denial from his girlfriend’s side, Roth smuggled the puppy onto the ship in his duffel bag around 8 PM that night. The night passed silently, no one, except few of his mates got to know that there was a puppy onboard.

How did the sailor dog fit in?

The dog was to be named, after intense discussion, everyone settled for ‘Sinbad’, the name was perfect for a sailor. Soon he was formally enlisted with his paw impression. Sinbad was now an official part of the Campbell. He was given his own uniform, bunk, service record and IDs (including Red Cross.) 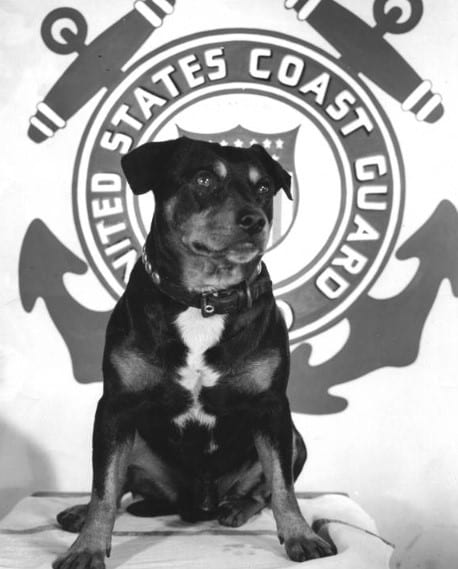 Eventually, Sinbad learned the daily routine of the ship. He would wander around in the gallery at the time of mess, aware of the fact that food is on the way. He would often share racks with other sailors, occasionally taking a lick of their coffee.

How important was he to the sailors of Campbell?

He was considered a valuable member of the Campbell during the Second World War as it was commonly believed that the ship was ‘unsinkable’ as long as Sinbad was on board. In February 1943, Campbell was part of the ‘48-ship Convoy ON-166.’

The convoy was attacked by U-boats. Campbell fought with the U-boats but was eventually stranded for 9 days until rescue came. Repairs were required, as a result only necessary personnel were ordered to remain onboard. Sinbad, being the lucky charm, stayed on board.

However, during warfare, Sinbad would hide below a sailor’s bunk, with his paws on his ears to avoid the loud gunfire. But, as soon as peace restored, Sinbad would rush to the deck to celebrate and motivate the fellow sailors. 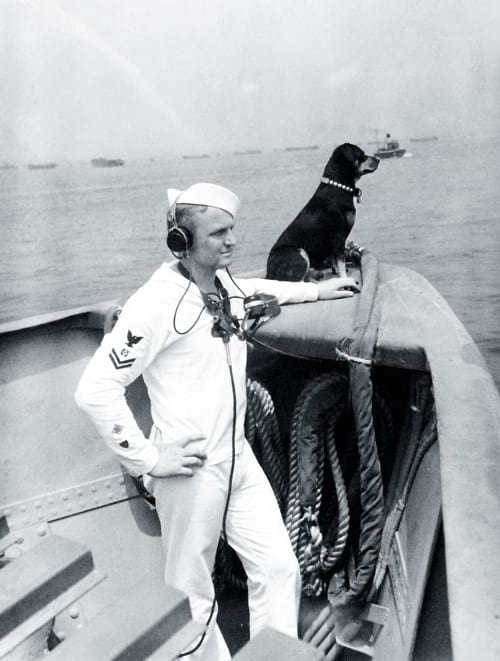 Also, Sinbad almost created an international controversy in 1940. With Nazi occupation of Denmark, USCGC Campbell was sent to Greenland (a Danish territory then) to negotiate and develop diplomatic ties. Being fond of land, Sinbad enjoyed the wide open spaces. However, he was more interested in chasing the sheep that happen to graze there.

Greenland is a country with very limited resources, and as a consequence, herding is an important activity to sustain life. Sinbad’s ‘fun’ game of chase and run with the sheep had a severe impact on sheep. A few sheep died due to exhaustion, others were reluctant to go out grazing.

Locals were really unhappy with this; they demanded the captain to kill Sinbad after he was traced to USCGC Campbell. The captain issued an order banning him from Greenland.

Life away from the sea

After the war ended, Sinbad was promoted to the rank of K9C-Chief Dog for 6 years of remarkable service at the sea. But just a few weeks after he earned the title, he lost it for insubordination. In fact, Sinbad was promoted and demoted several times throughout his career.

Sinbad was awarded a total of five battle stars and six campaign ribbons during his service period. After he retired as Chief Dog (he regained the post) in 1948, he went on live a peaceful life at Barnegat Light Coast Guard station, New Jersey.

Sinbad died on 30 December 1951, at the age of 14. He rests near the flagpole of the light station. The spot is marked by a monument. He is one of two dogs “to be classified as non-commissioned officers rather than property by the US military”.

Enjoyed this article? Also, check out “Pep The Dog, Who Was Sentenced to Life in Prison for a Murder He Didn’t Commit“.

Previous Article
Gliese 581g: A Habitable Exoplanet or Just Another Celestial Object Orbiting a Star?
Next Article
Insects from Hell: Mecoptera, the Fly with a Scorpion Tail