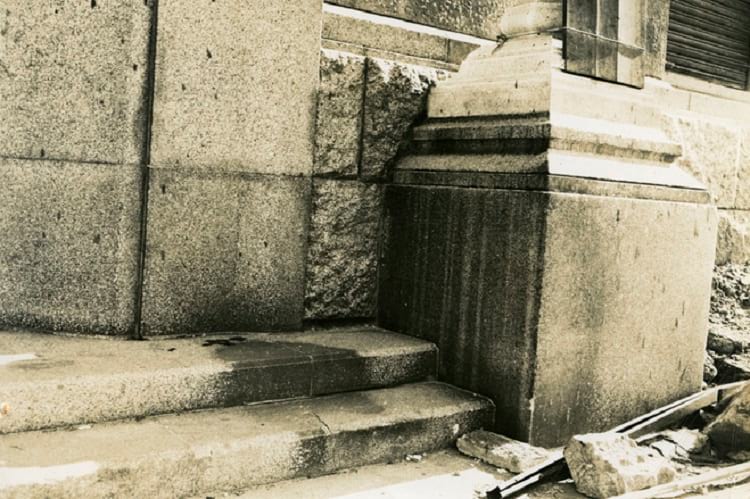 Shadow of a man on the steps of Sumitomo Bank in Hiroshima. (U.S. Army)

The bombings of Hiroshima not only left the city in shambles but also left the shadow of victims that were burnt without leaving their traces behind. When Enola Gay dropped bombs on two Japanese cities during the War, little did people, who survived them, know what they had endured.

During the year 1945, when the Second World War was almost nearing its end, the United States of America dropped two nuclear bombs on the Japanese cities of Hiroshima and Nagasaki. The cities were instantly reduced to a pile of dust within minutes but that was only the beginning of larger problems that Japan was about to face.

The after effects of the atomic bomb dropped on Hiroshima are still visible in some form or the other in the generations of people that lived the traumatic times.

On the morning of August 6th 1945, at approximately 8:15 AM Japanese time, the first ever nuclear bomb used in warfare – Little Boy – came crashing down on Hiroshima, destroying everything in its wake. It was a day of usual business at the Sumitomo Bank in Kamiya-Cho, when the employees were making their way towards their workplace. At the entrance of the bank – approximately 250 metres away from ground zero – a person sat on its stoned steps, waiting for the bank to start its operations for the day.

As soon as the bomb went off on touchdown, within seconds, the said person, supposedly a 40-year-old woman, was incinerated in such a way that only the outline of her body or her shadow remained on the steps. The eerie silhouette was so vivid that one could also guess the way she sat on those stoned stairs before the bomb disintegrated her body completely. More than eighty thousand people in the entire city lost their lives at the same time as a result of the massive blast.

With temperatures from the bomb flare reaching approximately 1000 to 5000 degrees centigrade, it was very obvious that anything the heat touched would have either melted or turned to ash leaving no trace. The fireball that spread over three kilometers created a mega heat and firestorm that is said to have lasted more than six hours.

Everything in its path was completely destroyed, including humans that were surprisingly wiped off from the surface of the earth within a fraction of seconds. Tens of thousands of lives were lost during one of the worst crimes against humanity in 1945 and the “Human Shadow of Death” still reminds people of the greatest tragedy. 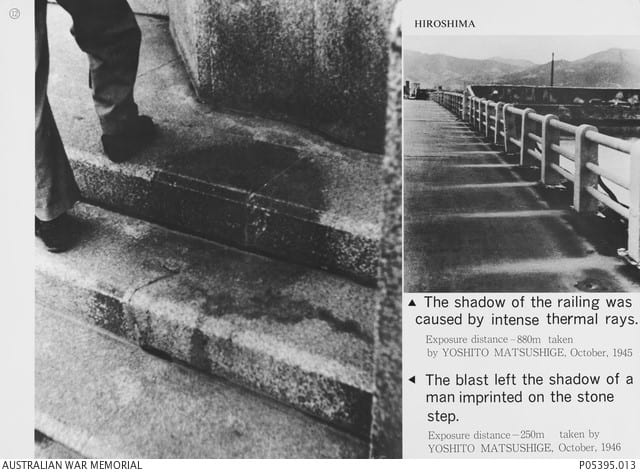 The Human Shadow of Death also known as Human Shadow Etched in Stone is a living example of the level of destruction the two American bombs had done during WW-II. They claimed innocent lives, rendering millions homeless with radiation-exposure disorders that continue to haunt the Japanese to this day.

Other similar distressing shadows left due to the bombings were that of a bicycle on the floor, a permanent whitish shadow of a bridge on the tarred roads, which had melted down, a figure with a walking stick and an outline of a person holding a ladder to name a few.

Though most of the others have faded out with time, the Human Shadow of Death remains more than intact. Years after the War, wind and sun began working their way on the “shadow”, which is dubbed Hito Kage No Ishii in Japanese. Authorities tried to preserve it by placing it in a glass case, fencing it entirely, but that did not work. And so the part of the stone bearing the shadow is now cut off and enclosed in a glass case, well preserved by the Hiroshima Peace Memorial Museum.

The debate over the shadows of Hiroshima

Years after the shadow was discovered at its site, scientists argued that the woman, who they thought could have been a certain Mitsuno Ochi, was vapourised, since nothing but her outline was left behind. They disputed that is not normal for a human body to vanish into the air without leaving its trace or at least remains, even if the bomb had the potential to raze an entire city.

Renowned radiologist at the Hiroshima University, Professor Masaharu Hoshi, has been studying the effects of radiation on atomic bomb survivors for thirty years now. He stressed that complete vapourisation of a human body, when exposed directly to such high temperatures, in the absence of any barrier between the two, is possible. Medical experts brushed aside his evaporation theory, stating that despite ground temperatures exceeding more than 1000 degrees centigrade, bone fragments or carbonized organ remains could be left behind. The heat did not have the capability of evaporating an entire individual and leaving nothing but shadows.

Although his theory has now been shot down, a long list of questions remains as to what could have happened to the person, who left behind such a haunting image that the world just couldn’t find answers to even after seventy-three years of the catastrophe.

Previous Article
Clear Water Lagoons and Pristine White Sand Dunes of Lençóis Maranhenses National Park
Next Article
Allahabad to Prayagraj: A Journey of a Historical City into the Modern Times