Sarah Baartman: Tragic Life and Times of the Enslaved African Woman, Exploited for Her Large Buttocks Artwork of Sarah Baartman being used as an exhibit. (A Paris chez Martinet)

It is humiliating to be gawked at. But, it is even more humiliating and infuriating if you are touched, groped, exploited, subjugated, violated, penetrated and destructed under inhumane conditions. That’s exactly what happened to Sarah Baartman some 200 years ago.

Sarah Baartman was born as Sawtche or Ssehura or Saartjie, meaning the diminutive form, in 1789. Being just 4ft 7in tall, she belonged to the Khoikhoi nomadic tribe that lived in the eastern part of the Cape Colony of today’s South Africa.

The life of Sarah was full of hardships. Her mother died when she was just two-years-old. Her father, who was a cattle driver, died when she was a teenager. Sarah’s mother belonged to the oldest tribe in Southern Africa, Khoi tribe.

Women of that tribe had a lighter skin tone and well-developed hips. In Sarah’s mother’s tribe, developed hips was a sign of beauty at that time.

Sarah’s hardships multiplied after she worked as a domestic help in Cape Town in the house of a Dutch Doctor named William Dunlop. Dr Dunlop purchased her from her previous employer, an Afrikaans farmer.

Being a Khoikhoi tribeswoman, by this time Sarah developed large buttocks, which in medical terms is known as steatopygia. It is a state in which a woman or sometimes a man accumulates substantial levels of tissue on the buttocks and thighs.

Such a buildup of fat also extends to the outside and front of the thighs. Thus, producing a curvaceous figure in the tribe’s women. The genetic characteristic of steatopygia can also be found in women of sub-Saharan African origin, pygmies of central Africa and the Onge tribe of the Andaman Islands.

Sadly, this physical condition made her a cause of fascination to the white European colonizers of the early 19th century. They, thus, made their biggest mistake by racially categorising Sarah or Saartjie Baartman as a sub-human and physically exploiting her.

Doctor Dunlop, who at that time was working for the Royal Navy, used Sarah as his slave and sexual servant in Cape Town for some time. Later in 1810, he and his partner a mixed-race entrepreneur named Hendrik Cesars took her to London. There they changed her name to Sarah or Saartjie.

Once in London, Dr Dunlop and Cesars convinced Sarah that she could become rich if she exposed her body. Innocently, she accepted the proposal without hesitation. Then for the next few years, Dunlop and Cesars organized freak shows across England and made her expose across cities in the kingdom as well as the Netherlands.

She was treated like an animal. She walked, stood, sat or danced obediently. The white people saw her with stupefaction, astonishment, disgust and amusement. Both men and women touched her.

Sarah was the testimony of the black race’s inferiority

Meanwhile, scientists and doctors started throwing up all types of theories in explaining Sarah’s anatomy. For them, Sarah was the testimony of Black race’s inferiority and she was a victim of some kind of sickness. Also, as Sarah’s sexual organs were abnormal, the scientists said, she was suffering from macronymphy.

A young Jamaican activist against racism and slavery, Robert Wedderburn, formed a support group for Sarah. He also initiated legal pressures on the British government to put a stop to such freak exhibitions.

To avoid such pressures, in 1814, Cesars took Sarah to Paris. There she was exposed at various venues including a circus. They called her the Hottentot Venus or Black Venus, which means a Khoikhoi person. Slowly and surely Sarah was forced into prostitution during private gatherings. In such gatherings, she was considered as a true sex object.

According to Georges Cuvier, Sarah was most likely the missing link between man and the animal. Georges Cuvier is believed to have asked permission to formally study the Bushman woman with better precision.

After completing his research, the professor compared the face of Sarah with that of an orangutan and then said her buttocks appeared like female mandrills.

Unfortunately, on 29 December 1815, Sarah Baartman died in Paris at the age of 26. She died poor and of shame and disease. At the time of her death, she had pneumonia and/or syphilis, and also she suffered due to alcoholism. Soon after her death, the professor dissected her body. Before doing so, he made a plaster cast of Sarah’s body.

He then displayed her remains in Paris. In 1817, the professor presented his research work at the Academy of Medicine. According to his study, the black African people were condemned to perpetually inferior.

Until 1975, the genitals, brain, skeleton and a plaster cast of her body were exposed to the general public in Paris. After becoming the president of South Africa in 1994, Nelson Mandela requested the French government to return Sarah’s remains.

The fate of Sarah Baartman’s remains

Sadly, the French government initially declined. Later in March 2002, they accepted the request. On August 9, 2002, Sarah Baartman ’s remains were buried in the area of her birthplace in Eastern Cape about 192 years after she had left her nation. 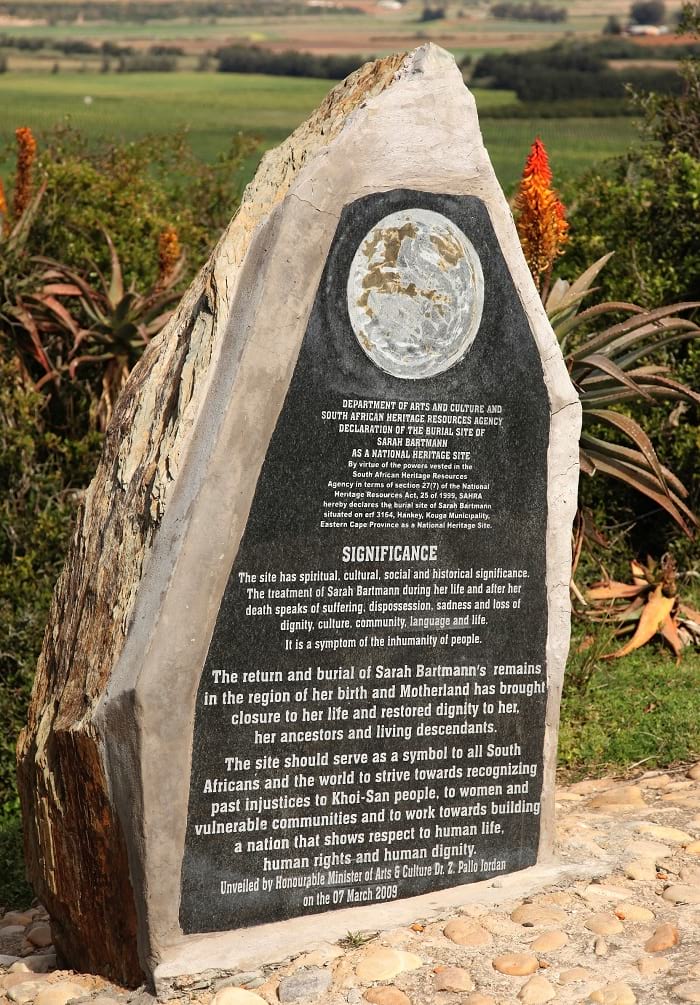 Over several years many books have been published about Sarah’s treatment and cultural significance. Sarah’s life and times were covered in the 2010 film ‘Black Venus’ and also in the 1998 documentary ‘The Life and Times of Sara Baartman’.

There happen to be many more details about Sarah’s life that continue to be unknown and unconfirmed. People today cannot undo the damage inflicted on Sarah. The least we can do is summon enough courage to speak the naked truth that might comfort her soul. One must remember that she was perhaps the first recorded Black female to be a victim of trafficking.

Enjoyed this article? Also, check out “‘Ape Woman’ Julia Pastrana: The Sad and Short Life of the Ugliest Woman in the World”.

Previous Article
Osamu Tezuka: The Walt Disney of Japan
Next Article
Maned Wolf: The Existential Crisis of Chrysocyon – the Golden Dog That Looks Like a Fox