The Salar de Uyuni is one of the peculiar marvels of the natural world. It is the largest salt flats in the world, extending across an area of 10,582 square kilometres and situated at an altitude of 3,656 meters, in southwestern Bolivia’s Potosi and Oruro departments. Surrounded by the snow-covered Andes mountains, it is a remote region with a remarkably scenic landscape. There is little to do in the Salar de Uyuni, but there is plenty to see and experience.

The Spanish name translates to ‘the salt pans of Uyuni’. The salt flats get their name from the sparsely populated Uyuni town, located some 25 kilometres from them. 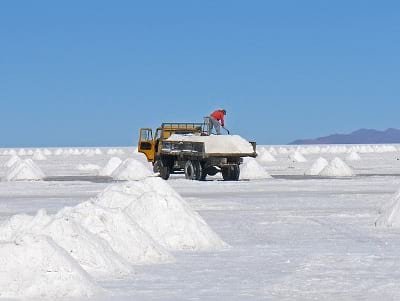 Salt is the main feature of the Salar de Uyuni. There is an estimated 11 billion tons of it and, as the bright sunlight ensures a continuous production, the region is not likely to run out of it any time soon. The salt-processing factory in Colchani, a small village 20 kilometres from Uyuni, refines over 25000 tons of salt annually and exports it all over Bolivia and to Brazil.

Aside from salt, the Salar de Uyuni has rich lithium deposits. They account for almost 70% of the world’s lithium deposits and could mean a huge fortune for Bolivia, but the prospect isn’t exciting everybody. There is a raging controversy in the region about how extracting lithium in great amounts could negatively impact the salt pans and the environment.

The white, salty plains of Salar de Uyuni came into existence after the gigantic Lake Minchin dried up and disappeared over 40,000 years ago. Several smaller prehistoric lakes replaced it and evaporated as well, leaving behind salty strata.

That is the scientific explanation. The mythologists have a different take. There are two dominant myths about how the Salar de Uyuni formed, and both involve women.

In the first story, the salt flats resulted from a domestic saga. A man named Cuzco cheated on his wife, Thunupa, and left her for a younger woman, Cosuna. The wife wept tears of grief and her salty tears flooded the ground and created the salt pans.

The second story involves a woman and her two lovers. When she became pregnant, her two lovers fought with each other over whose child it was. The distressed woman sent her child away and tried to stop the fighting. But then she realized she had to feed her child and she released her breast milk in that direction. The milk flooded the plains, and these later became the salt flats. In any case, the salt flats are so extensive that they are apparently visible from space and NASA uses them for satellite position. NASA also conducts experiments for their Mars missions on the nearby Lincancabur volcano. The atmosphere here, according to NASA, is like what Mars might have had many billions of years ago.

Apart from the salt strata, the most remarkable aspect of the Salar de Uyuni is its flatness. It is not completely flat as once thought – there are minor undulations – but flat enough to lend itself to some amazing trick photography opportunities and tourists make the most of it.

During the rainy season, from December to April, rainwater floods the salt pans and transforms them into a gigantic mirror reflecting the surroundings and the sky. It is an incredible spectacle and another attraction factor for tourists. To avoid getting mired in the resulting mud though, visitors can safely access only certain areas of the salt flats during this period. In the dry season, from May to November, people can trek across the entirety of the flats. There are four lakes in the area – Laguna Blanca, Laguna Verde, Laguna Colorada, and Laguna Hedionda. Located at the foot of the Licancabur volcano and situated adjacent to one another, Laguna Blanca and Laguna Verde have waters that are, respectively, white and turquoise from the mineral particles in them. Laguna Colorada appears red from the minerals and algae present in its waters, and the flamingos that flock here get their feathers dyed pink in colour from eating the red algae. In contrast, the flamingos in Laguna Hedionda are white because the algae are not present in that lake. There are, incidentally, three species of flamingos in the region, including the endangered James’ Flamingo. There are also many other bird species, local as well as migratory. 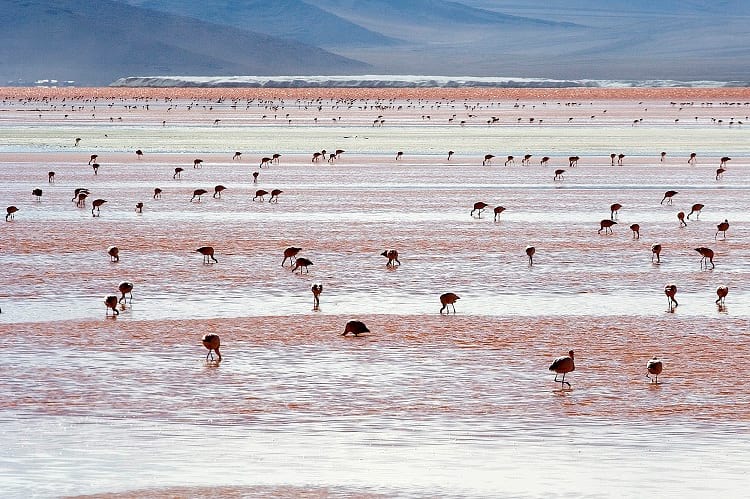 Visitors can see natural geysers and bubbling hot mud stretches in the Sol de Mañana geothermal area and immerse themselves in outdoor hot-water pools at the Polques Hot Springs. It can be quite an experience to sit in hot water on a chilly evening and look up at clear night sky lit with a million stars. Since there is no pollution here, the night skies are very vivid and beautiful. 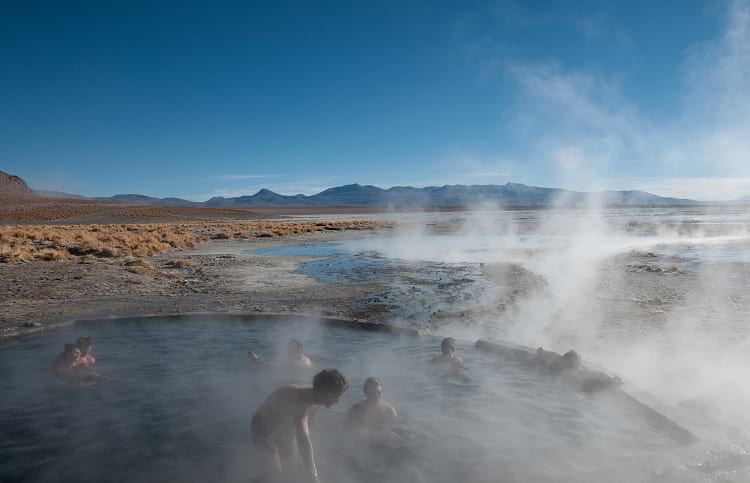 Hundred-year-old cacti and other plants grow on Isla Incahuasi and Isla del Pescado, two islands in the middle of the Salar de Uyuni. In the olden days, when travelling across the salt flats, people made journey breaks on these islands. These islands and the areas around the lakes are the only places with plant life in the Salar de Uyuni. Other sights near the Salar de Uyuni

In the 19th century, there was an ambitious plan to build a railway network connecting Uyuni to other parts of South America. The plan fell through, however, after the mining industry collapsed, and as it would have been too expensive to transport the train carriages away, they were left where they were. Over the years, with constant exposure to the elements, they have mostly rusted and fallen apart. Some have also been vandalized for scrap iron. Even so, the train graveyard, as it is called, is a popular tourist destination. 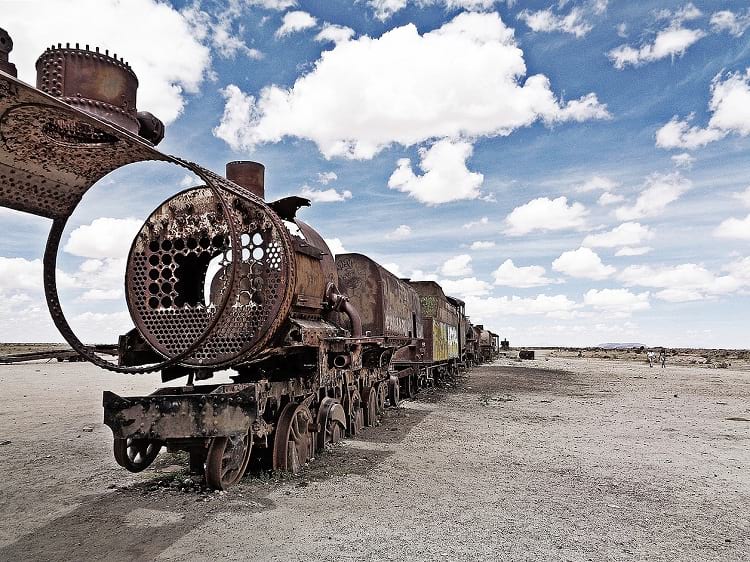 Also, on the must-see list are the ghost towns of San Antonio de Lipez, abandoned after the silver mines folded, and San Cristobal de Lipezare, abandoned after silver was discovered underneath it. The journey to these towns can be pretty taxing and part of the adventure is reaching them safely.

There are wind-eroded stone formations near the Eduardo Avaroa Andean Fauna National Reserve, the most famous one being the Arbol de Piedra (stone tree). Made of quartz and standing five meters in height, it looks like a surrealistic tree sculpture. Being subject to the continual corrosive effects of the wind, this famous natural monument is already crumbling and may topple down soon. 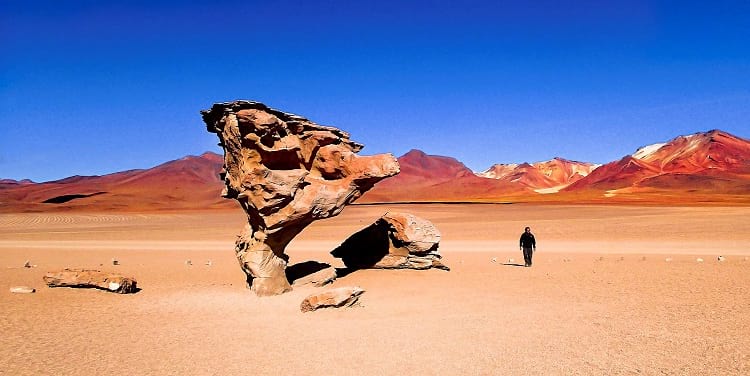 While Uyuni has inexpensive lodges and guesthouses, visitors may want to splurge for an inimitable experience at the Palacio de Sal, Bolivia’s renowned salt hotel.

The first Palacio de Sal was built entirely of salt blocks in 1993-1995 and, although it attracted widespread attention for its unusual building materials, it soon ran into sanitation problems. There was no proper way to dispose-off the waste and the entire enterprise began to turn into an environmental disaster. In 2002, the government ordered the hotel to shut down and it was dismantled.

The current Palacio de Sal was constructed on a different site in 2007, using over a million 14-inch salt blocks and better plumbing. Apart from some wooden fittings, everything in the hotel – the floors, walls, ceiling, columns, furniture, and sculptures – is made from salt. The hotel has 42 igloo-shaped rooms, categorized into Standard VIP, and Suite, and all have attached bathrooms. The hotel has a saltwater pool, whirlpools, and a sauna, and offers buffet-style meals. There is a golf course nearby where visitors can practice teeing-off on the white.

The hotel has one strict rule for all its guests – they cannot lick the hotel walls. Salt block hotels have a limited lifespan as it is – only about 15 years maximum – and licking the walls could potentially reduce it. The hotel staff keeps busy refurbishing the walls on a regular basis.

There is no bus service from Uyuni to the Palacio de Sal. Visitors must hire a taxi to reach it and arrange for one to pick them up when departing from the hotel.

There is no best time to visit the Salar de Uyuni. Since the weather pretty much remains stable throughout the year, any time is good to visit. Many people prefer the rainy season though for the mirror effect brought on by the rain-flooded flats.

The most common way to reach the Salar de Uyuni is by taking an overnight bus from La Paz to Uyuni, although there are also bus services from other Bolivian cities and from Chile, Peru, and Argentina. Visitors can also fly to Uyuni or take a train. From Uyuni, visitors can sign up for a guided tour or hire a car to go to the Salar de Uyuni.

Bring along warm clothing, sunglasses, hat, water-bottle, and good walking shoes; visitors can hire boots for walking in the water-flooded salt pans. Visitors may experience altitude sickness when they first arrive in Uyuni, so it will help to take time to get acclimatised and not engage in too many strenuous physical activities.

Enjoyed this article? Also, check out “The Socotra Island of Yemen“.