Saint Pierre and Miquelon: A French Territory in North America and the Last Bastillion of New France 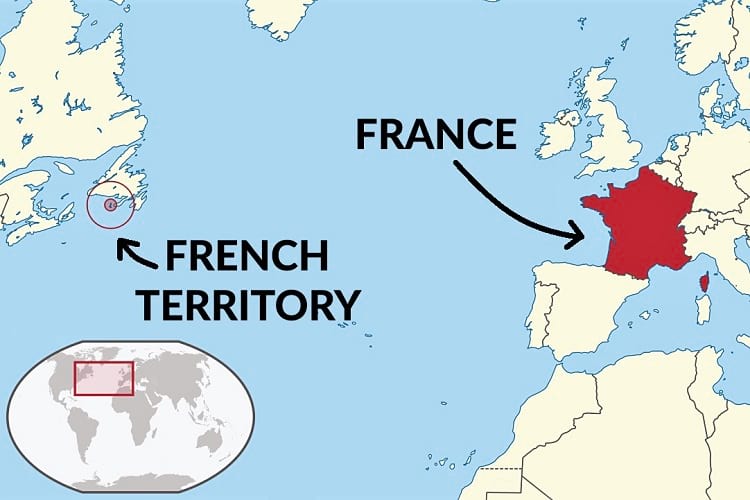 In the times of European colonization, France amassed a mighty empire and still some remnants of it remain around the world today. One of which is a set of four islands off the coast of Canada called Saint-Pierre and Miquelon. Despite its tiny size and supposed obscurity, Saint-Pierre has always been in the spotlight having historical links with Inuit, Native Americas, the Hundred Years War, the American Revolutionary War as well as World War Two.

When European nations viewed for power in North America, the French colonized an enormous territory known as New France, covering an incredible distance, from the tip of Canada to the Gulf of New Mexico – stretching as west as modern day North and South Dakota in the US. Saint-Pierre and Miquelon – off the coast of Newfoundland and Labrador, Canada – is the last territory of New France which remains under French control however they are now self-governing. 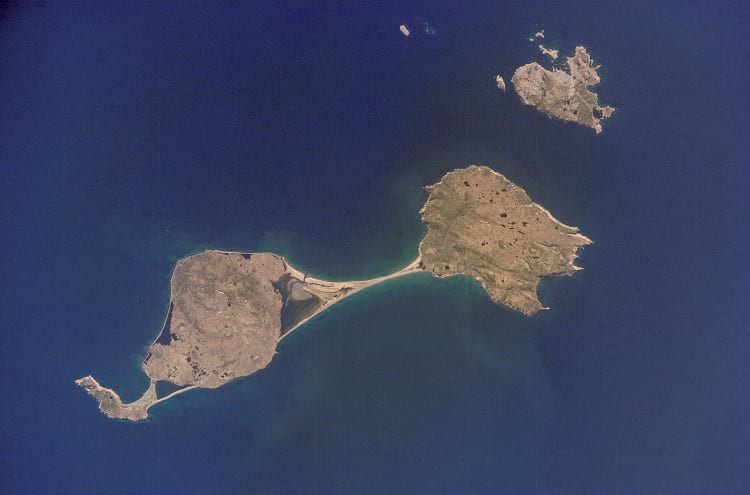 The four island population stands with little over 6,000 people. Like many places of French Origin, Saint-Pierre (Saint Peter) gives the etymology to the islands from the patron saint of fisherman explaining their fishing culture. Miquelon is less clear but is believed to have come from a Basque sailor and refers to Michael however that person is not identified. 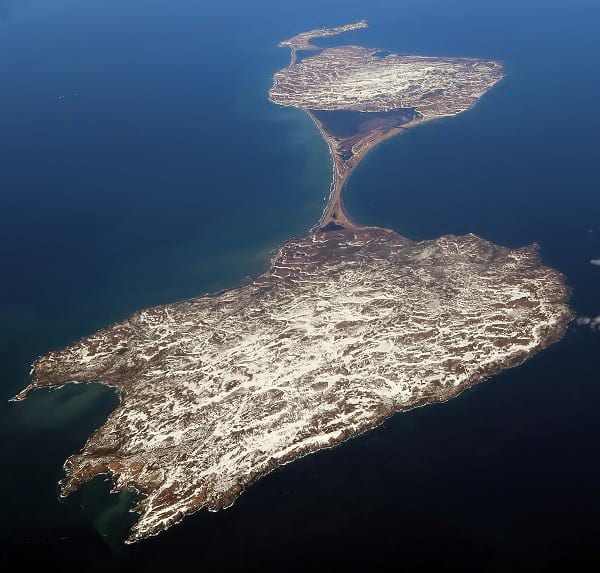 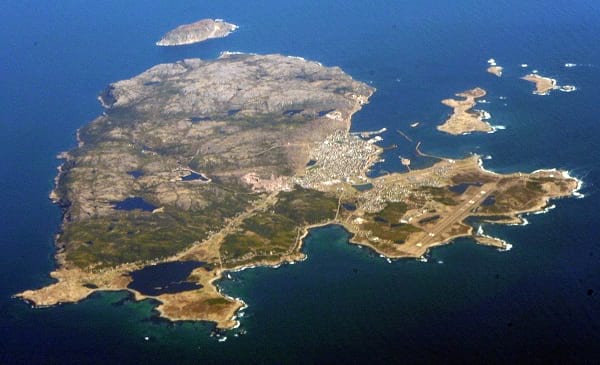 The islands have been owned by France since 1536 and settled consistently by the end of the 1600s. It appears the main reason was the vast shoals of Cod in the area which was a main source of food in those periods. Under the Treaty of Paris (1763) – France gave up all of its North American territory except Saint-Pierre and Miquelon. Basically, the British won the Seven Years War meaning they were able to seize most of the French territory. This would begin a period of time in which the territory of Saint-Pierre yo-yoed between the two, during various occupations and wars. The American Revolutionary War brought about another treaty at the resolution – the Treaty of Paris (1814) – which gave Saint-Pierre back to France and despite more British unrest in the Hundred Days War it remained with the French.

It has been settled by many people in the history of human migration including Basque, Breton, Scottish, Irish and the Mi’kmaq indigenous tribe.

The economic rise of Saint-Pierre began and remained in fishing. Cod was in abundance and the facilities were excellent.

“The original fuss over St. Pierre was largely due to its natural harbor on the east side of the island—one of the finest deepwater docking areas in the entire region, which could handle large trawlers and fishing vessels without much manmade manipulation.” 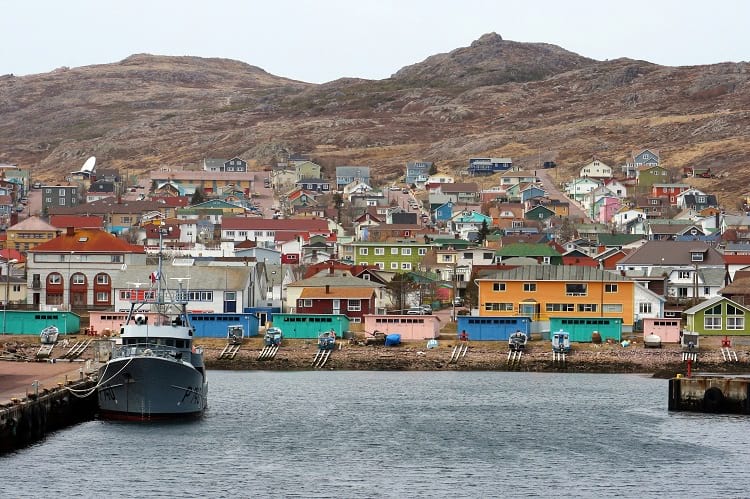 This would change drastically during the 1900’s when the economy boomed not from cod but from smuggling alcohol during America’s infamous prohibition era. It was passed by the American government (in the Eighteenth Amendment) which meant the sale of alcohol was not allowed. They housed the biggest warehouse in North America which included massive caches of Canadian Whiskey and French wine.

“Canadian spirits, Caribbean rums and French wine were all siphoned through St. Pierre, making the archipelago such a crucial cog on the smuggling machine that fish factories quickly became storage facilities, and distilleries quickly opened—even Al Capone spent a bit of time in St. Pierre calling the still-open Hotel Robert home…. The movement of alcohol became so omnipresent in St. Pierre that most fishermen and shipbuilders gave up their maritime jobs for more lucrative opportunities working for American gangsters. And after a full decade of the Prohibition bonanza, the repeal of the Eighteenth Amendment in 1933 sunk the black market overnight, leaving the island on the brink of economic ruin.”

It is always said that the Nazis did not set foot in North American soil and this is either technically true or untrue depending on how you judge the French Vichy Government. As Nazi Germany took over France, the southern region became their own government, working with the German hierarchy. This of course meant that Saint-Pierre came under Vichy rule and become a strategically important site. So much so that the defeated French government Free France, under the leadership of Charles De Gaulle stormed the island to make sure it did not fall into Vichy ergo Nazi hands. This was an example of the famous French Resistance and made headlines across the globe.

When prohibition ended, the French government thought of a new outlay for their collectivity. Saint-Pierre is now seen as a way for North Americans to experience France a lot closer to home. Without (the) need of even crossing the Atlantic Ocean. For the culture is very much French, the majority of which identify as Roman Catholics, speak French and use the Euro even though their geographical position is far from the mainland. Even license plates are European. 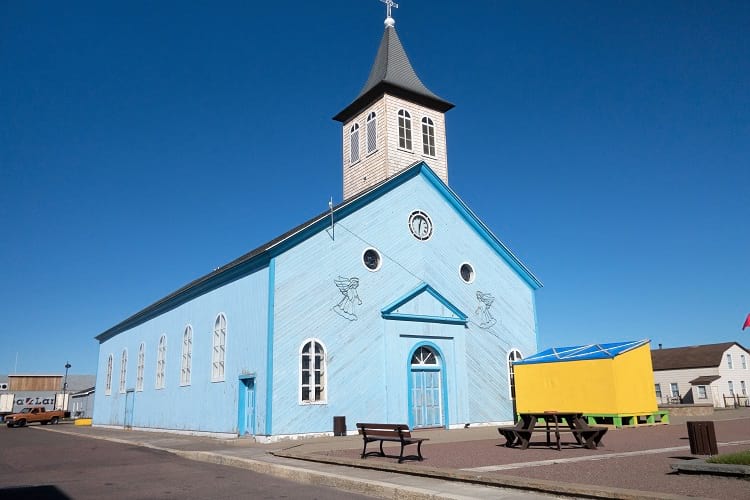 Our Lady of Ardilliers Church in Saint Pierre and Miquelon. (Murzabov / Wikimedia Commons)

Food includes French delicacies and staples such as French Cheese like Brie, Baguettes and French Wine. There is a guillotine in the local museum, surviving since the only victim to be guillotined in North America – a murderer back in 1889. It has become somewhat of a tourist destination for these novelty reasons as well as the beauty in the landscape. There have been recent reports of oil being discovered not too far from the coast which again will shift the economic focus.

Activities include hiking and biking routes, scuba-diving in the Isthmus which has the remains of many sunken vessels from past wars. Flora and Fauna include horses and seals which are interspersed within a glorious landscape that is certainly more Canadian than French. There are museums telling the history of the small but important island colony, tours including of the prohibition days. Day trips to Sailor’s Island also, that was where fisherman lived, closer to their target area in an even more adverse environment. It did not have electricity until 1963 after all.

The other main island – Miquelon – is less densely populated than Saint-Pierre and has a more country than city feel. 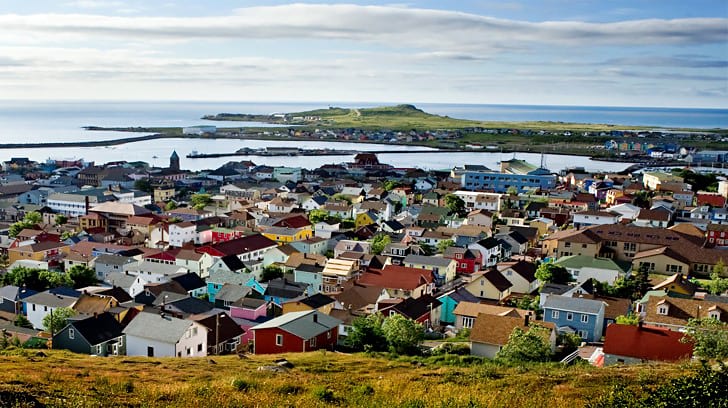 An issue with the tourism plan has been the problem for tourists to get there. However, this is being rectified by new and easier routes as well as a public airport.

“Jean-Hugues Detcheverry, director of tourism in St.-Pierre, explained that the bureau is working on getting air charters from Toronto and New England, which would cut down on the cost and hassle of traveling to the islands. (The new $56 million airport is already spiffy.) They’ve also focused on luring cruise ships to stop here: 14 will come this summer, including Silversea, Seabourn, and Clipper.”

The future of Saint Pierre and Miquelon

Saint-Pierre and Miquelon may take another drastic turn in regards to economics if the rumours of oil findings are verified. In regards to the island itself, the French culture is very much thriving and will remain for generations to come. In this aspect, there will always be a touristic element to the islands with an appealing destination and an incredible history.

Enjoyed this article? Also, check out “The Rock of Gibraltar: Guardians of the Strait of Gibraltar“.

Previous Article
Ugly Law: When the US Banned Unsightly Individuals from Coming Out in Public
Next Article
The Silky Anteater: The Nocturnal Dweller of the Tropical Rainforests