Robert Wadlow: Trials and Tribulations of the World’s Tallest Man 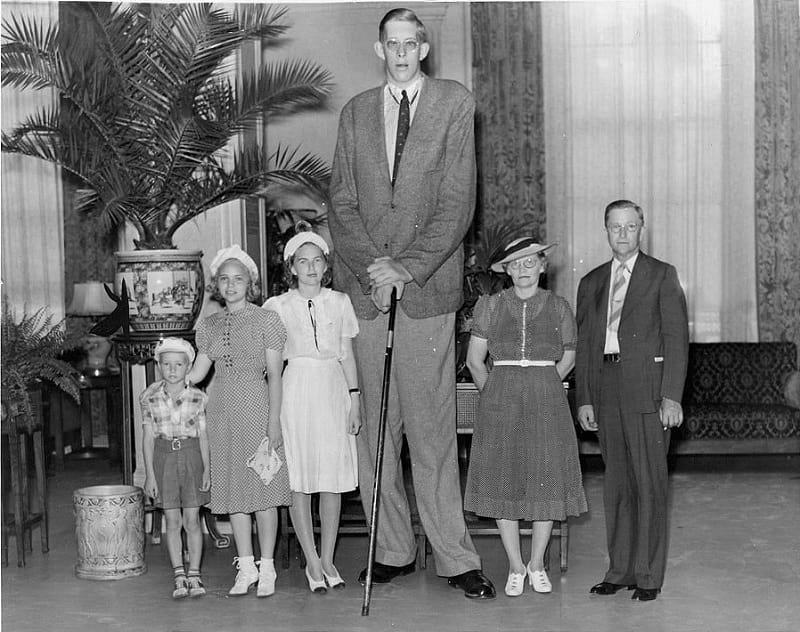 God does not play dice with the universe, said Albert Einstein. Yet some humans seem an exception to this rule. Excessively tall, surprisingly short, or grotesque in other ways, they seem to question nature’s wisdom in crafting body shape. The answer lies in the body’s endocrine system which goes haywire for myriad reasons. Robert Wadlow – the tallest man ever, born to Harold Franklin and Addie May at Alton, Illinois, USA; is a good case study.

Born normal, but grew at an alarming rate

Robert was born on 22nd Feb’ 1918, with a normal 4 kg birth weight. It was his weighing 13 kg in 6 months, which alarmed the attending doctors. Then on, there was a rapid increase in his height and weight. Four siblings, younger to him, were all normal. By the age of 8, he was taller than his father. That made him a VIP of sorts. In primary school, he had a custom made table and chair in the classroom. He was a cynosure basketball player. All he had to do to score a basket was stretch his hand up over to the mouth of the net. A cinema hall created a special seating arrangement for him in the front row. It had five-seat space to spread his frame in a relaxed manner.

Malfunction of the pituitary gland caused his condition

But all was not hunky-dory. Behind the veneer of name, fame and revelry, was an anguished soul in an abnormal body frame. Pituitary, the master gland of the endocrine orchestra, was playing a wild tune in his biosystem. When an individual matures (14 to 19 years in males), the growth locus of long bones goes quiescent, and the further growth of the person stops. No such process, technically called ‘epiphyseal closure’ or ‘bone end plate closure’, occurred in Robert’s body. The result, Gigantism – a consistent and unstoppable body growth.

Ventured into show biz to support his parents

His gentleness stemmed from the poignancy of his anatomical and physiological constraints. Help and encouragement from his family and local community notwithstanding, the awe of onlookers often unsettled him. A wave of severe economic depression was lashing the world, and Robert knew how expensive it was for his parents to support his customized living. So, when the Ringing Brothers Barnum and Baily Circus offered him a job, Robert quickly took the opportunity. Even as his parents disapproved a circus job, he joined it and delivered well. Seeing his success, many business houses approached him to promote their product. The International Shoe Company gave him a pair of giant shoes, 37AA and a half size to wear, and took him on a nationwide publicity tour. As he continued to grow, his shoe size would reach 40.

Robert was a great crowd puller. His mild manners and humility earned him the title of ‘Gentleman Giant’. Yet he was ill at ease in public and longed for the safety and comfort of his home in Alton.

Being a giant was no joke

A giant body frame was a liability in many ways. His energy requirement was 8000 calories, more than thrice of an average human adult. His long legs suffered from poor blood circulation and needed brace support for walking. Lack of sensation in the legs was pathological. If a blister formed, he wouldn’t even know about it. And that proved to be his undoing. On July 4, 1940, in a professional appearance, an ill-fitting brace injured his ankle. Injury persisted unnoticed, leading to blister formation and generalized infection. His body temperature shot up to 106 degrees Fahrenheit. A minor surgery and blood transfusion was performed but to no avail. On the next day, 15th July, Robert passed away at the age of 22. His height, measured 18 days before death, pegged at 8 ft. 11.1 In; the tallest human till date.

Robert Wadlow was a darling of his native town

Nature’s perceived aberration, Robert Wadlow was loved and revered by the inhabitants of Alton. More than 40,000 people attended his last rites. Funeral services were attended by 10,000 people, and all businesses in the town remained closed on that day. His coffin, weighing 1000 pounds was carried by 12 pallbearers, and 8 walked along as relievers up to the Alton Cemetery.

A legend in life and beyond

At South Illinois University School of dental medicine, a life-size bronze statue of Robert Wadlow, as well as the bronze model of his chair, is open for public viewing. The memory of Robert is also preserved in the Alton Museum of History and Arts. There, the Photographs and artefacts related to Robert’s life will give you a feel of life that the Giant with a Golden heart lived and suffered.