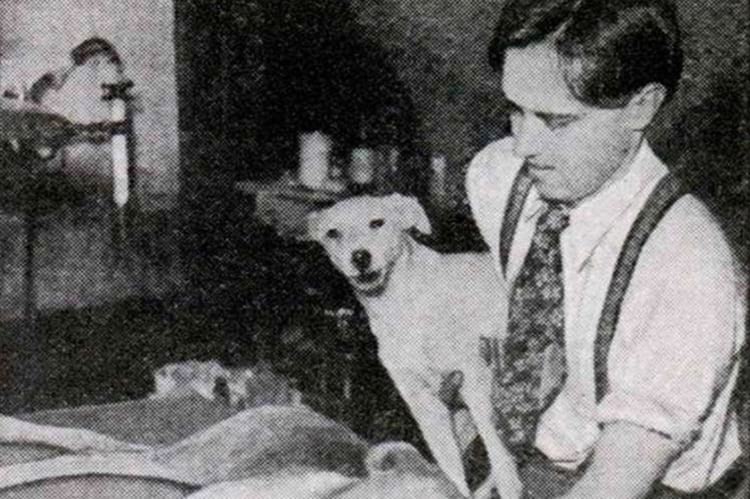 Dr. Robert Cornish with one of the Lazarus pups. (Source: www.madscientistblog.ca)

Tales of Mad Scientists have been in existence for centuries now. And while many are criticized for being wacky, inhumane and downright psychopathic many can also be celebrated for making breakthroughs within various scientific fields. This is none more so than within the field of medicine where procedures today have origins from millennia ago; in medieval times and before them in prehistory. One such tale with a more modern spin comes from the 1930s in Berkley, California where an American called Robert Cornish attempted to bring the dead back to life.

Cornish was a medical phenomenon, graduating at 18 from the University of California and gaining a Doctorate at 22. He was a handsome chap but his eccentricity was soon apparent as one of his invention concept was a pair of spectacles to allow the reading of newspapers underwater. This may illustrate his intelligence; however as to gain a patent in those times was considered very noteworthy and could propel a person to fame. Cornish worked at the Department of Experimental Biology at a University when he began to get notoriety for something of a darker nature than underwater specs.

Dog-lovers read no further. Cornish began an experiment to cure the undead but not permitted to use human beings he had to operate on dogs. The doctor organized a public demonstration which Time magazine witnessed. He named his patients – five fox terriers – Lazarus after the mythical figure brought back to life by Jesus.

Robert Cornish tried many different techniques before gaining moderate success with the following. He would suffocate the animals first with either Nitrogen or ether. He would wait no more than five minutes after the heart had stopped to try and resuscitate. To do this he found a way to keep the blood circulating by using a piece of wood called a teeterboard, a type of see-saw to rock the patient up and down to maintain the circulation of blood.

Before re-animation, he would inject the creature with a concoction of saline, oxygen, adrenaline, blood as well as anti-coagulants and coagulants. Oxygen would be blown into the mouth via a rubber tube. Bear in mind this was in the 1950s when CPR and techniques of the sort were in their infancy meaning his methods were extremely right-field.

The first three dogs were revived but showed little signs of life after. The best result was Lazarus II who was in a coma for eight hours before passing again. The fourth dog – Lazarus IV – came back to life albeit blind and brain-damaged, Cornish reported that she recovered to near full strength in a matter of months. Lazarus V was the same but returned to normality in shorter time. These are the words of Doctor Cornish only however and were not confirmed by Time or anyone else it appears. Despite these factors, Cornish hailed his experiments a success.

The mad-cap doctor was heavily criticized and eventually fired from the UCLA Laboratory when protestations about the canine killings reached their ears. He was forced to do his experiments in the confines of his own abode and with pigs rather than dogs.

Requiring funding Robert Cornish tried to clear his name by convincing people that his work was vital. This was through a movie titled ‘Life Returns’. Cornish played himself as does one of the Lazarus dogs. It uses a familiar aspect to pull at the heartstrings of the audience, with the doctor attempting to resurrect his son’s dead dog. It was the only way his son would love him again after all. The film was far from a success and ergo did nothing to improve the reputation of the doctor.

His next plan was to find a human patient. He searched the jails and found a willing convict called Thomas McMonigle, an inmate of San Quentin prison, convicted of killing a fourteen-year-old girl. The government declined the request on compassionate grounds. There is another rumour however which seems to be justified by newspaper reports from the time. This relates to the courts fearing a ‘double jeopardy’ clause. Death by the gas chamber which would have released the convict from his conviction and therefore he would have been a free man.

The experiments of Cornish continued and certainly will continue but at least now with more humane conditions we can hope. For it is a persistent quest of mankind to be eternal and although a scary thought it is one which will be pursued until completion. This is looking ever more likely and sooner rather than later with such incredible advances in medical science.

While Doctor Robert Cornish committed some very cruel acts can it be said that experiments like this are necessary in order to advance? To benefit the world in the long term? Is it worth the life of an animal, or a human to potentially increase the lifespan of another?

Previous Article
The Peculiar Tale of Hans Langseth and his Long Beard
Next Article
India’s Jharia Coalfield, a 100 Years of Simmering Greed