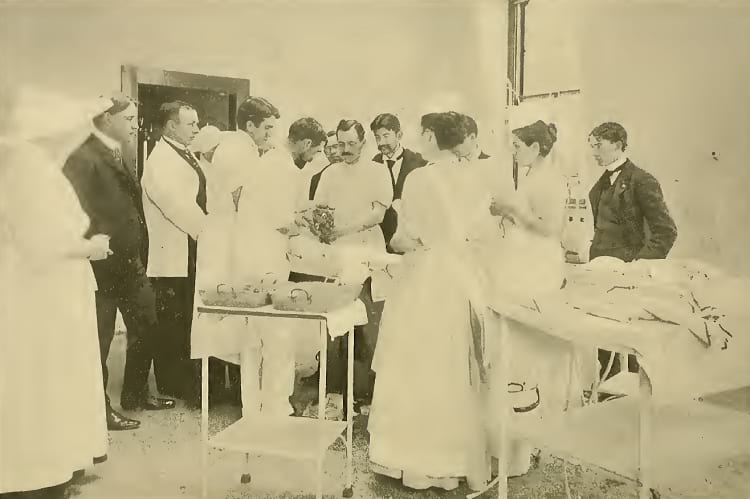 In the 19th century, with the advent of the railway in various part of the world, a special branch of medical practice sprang up that became known as railway surgery. The purpose of railway surgery was to tend to the injuries and other health concerns that inevitably occurred amongst railway workers and railway passengers. It wasn’t an altruistic enterprise, but one that arose out of hard-nosed necessity.

Railways in the 19th century and even into the 20th century were as dangerous as they were useful. They connected large tracts of land and made travel more feasible, particularly across the huge land mass of the United States, but, at the same time, they were notorious for collisions, derailments, and explosions. These accidents took a massive toll on workers and passengers, many of whom died as a result or suffered amputations, crushed limbs and fingers, fractures, burns, and other serious injuries.

While filing for injury claims was not as common back then as it is now, nor were these claims always paid, they did create a sufficient amount of stir to make the railway companies take notice, become concerned about reparations, and take measures to ameliorate the problems and install preventive measures. Railway companies appointed medical surgeons to treat the injured and the sick, set up hospitals along the railway tracks in remote locations, and organized hospital vans to ferry patients from accident sites.

Railway surgery soon developed as a special medical branch and the railway surgeons became very skilled at performing quick surgeries in the aftermath of accidents.

On the whole, though, the railway surgeons insisted they could remain objective and there were certainly many high-minded men amongst them that put medicine first. Even so, they never got the respect and recognition they desired from the AMA.

The railway surgeons then formed their own professional organizations and published their medical papers in their own medical journals, most of which make for fascinating if not gruesome reading about the surgical procedures they performed. Railway surgeons had to perform all kinds of surgeries and often in the direst circumstances and surroundings and they quickly came up with many innovative methods to make the best of their situations and save as many lives as possible. They were the first trauma surgeons in the medical world. It is commonplace nowadays for many companies to have their own medical facilities in which their workers can receive first treatment before being moved to a larger hospital. In the 19th century, the railway companies and some mining companies were possibly the only employers that provided this service.  As mentioned though, it wasn’t altruistic. It wasn’t so much for the benefit of the workers as it was to stave off potential financial troubles for the companies.

As it was, the companies did have to confront a good deal of trouble even with the railway surgeries in place. There was no shortage of tricksters, shysters, and fraudsters in the 19th century than there is in the present age. People came up with all sorts of made-up medical claims to extort money from the railway companies.

One of the most well-known and most decried medical claims against the railways was a condition that became known as the Railway Spine. This condition laid a good many people prostrate and they all claimed that travelling in trains was what had brought on their suffering. The problem was that the condition didn’t manifest into any physically observable symptoms.

Careful examinations revealed no injuries, external or internal. Medical practitioners and journalists wrote reams about the Railway Spine, and many railway surgeons voiced their opinions that the sufferers either had psychological issues or were outright frauds. The Railway Spine hysteria vanished around the turn of the century as, with the march towards the First World War, people encountered more real and more serious troubles.

Before that happened though, newly minted compensation laws forced railway companies in the USA, the UK, and Europe to pay several million in compensation to the folks suffering from Railway Spine.

Railway surgeries in the USA

It was in the USA that railway surgeries really grew into prominence. American railways were the most dangerous railways of that time period. In their haste to connect the entire country with railways and as inexpensively as possible, the railway companies often compromised on materials as well as on construction. They did not take adequate care with securing railway tracks on the ground and set up very few railway signals. There was no fencing either to keep people and animals from the railway tracks. Crashes and collisions were extremely commonplace. Injuries and deaths amongst railway workers were very high.

Newspapers of the time regularly reported on workers getting crushed between railway wagons, getting run over by trains as they worked on the tracks, getting burned in fires, getting their fingers crushed while coupling or decoupling wagons, getting injured when trains collided with people and animals crossing the tracks, and so on. Yet, despite the many amputations and life-threatening injuries, the railways never lacked for workers and some of the injured workers even went right back to work after being treated. There are news stories about workers returning to work after getting their kneecaps replaced or after getting wooden peg legs fitted.

Railway surgeries in the UK and Europe

British and European railways employed medical personnel too, but the local infrastructure was far more well-developed in these countries and there was never a concern about where to take the injured in the event of accidents. There were train derailments and other accidents, of course, but not on the same scale as in the USA.

The railway tracks in the UK and in Europe were more precisely installed and the companies did not cut corners to keep the railway budget down. They didn’t have to save on materials in order to bring more land under the railway track. This meant there were comparatively fewer accidents due to railway negligence.

In India, the development of the railway was somewhat similar to that in the USA. The railway connected far off places and more often than not there were no proper facilities of any kind in between. When accidents occurred, there were no hospitals or treatment centres to take the injured to, and people often died from not being treated on time. As in the USA, railway companies began appointing surgeons on the railways and began establishing medical facilities along the railway lines. Indian railways still maintain their own hospitals and doctors.

The legacy of railway surgeries

In addition to treating accident injuries, railway surgeons also engaged in vaccinating people, in treating infectious and non-infectious diseases, carrying out blood tests, in taking measures to prevent malaria, overseeing proper sanitation, checking that the water supply was clean, and in educating the general public on important health issues.

Railway surgeons also had to screen prospective railway employees to make sure they were healthy, were able to hear properly, were not colour-blind (as it was extremely important for railway employees to be able to discern the colours of railway signals), and did not have any pre-existing health issues that they might later blame the company for.

Making First Aid kits available on trains and training railway personnel in First Aid was one of the many progressive steps taken by the railway companies. Charles Dickson, a Canadian of the St. John Ambulance Association, was the principal force behind this change. There was some amount of consternation regarding this development amongst the railway surgeons, as some of them felt that it would undermine their profession. It turned out to the contrary. Having First Aid kits and trained first responders in railways made treating people easier for the railway surgeons. The percentage of lives saved went up.

The New York Academy of Medicine has a collection of railway surgery journals and interested parties can access and read these here or at various online sources. These journals offer a fascinating insight into the complex and, quite frankly, terrifying medical situations that the railway surgeons had to cope with. That they rose magnificently to the challenges and introduced innovations that advanced medical science is one of their most enduring and under-appreciated legacies.

Enjoyed this article? Also, check out “Old Penn Station: A Colossal Railway Terminal That Was Once a Crown Jewel of New York’s Heritage“.

Previous Article
Battle of Los Angeles: When the City Fought a Bizarre Battle with Nobody
Next Article
Pasqual Pinon: The Aberration of Multiple Heads