A Tale of Resilience: Poon Lim, the Chinese Sailor who Survived 133 Days Castaway in the Atlantic Ocean 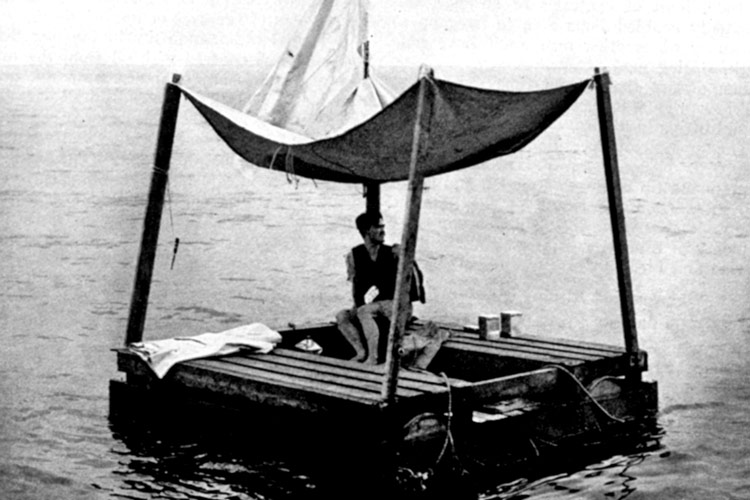 There have been countless remarkable stories of people getting lost at sea. While some of these stories are mere works of fiction, others are tales of real people going adrift in the open waters, surviving only on bare necessities available to them. One such real-life, awe-inspiring story is that of a Chinese sailor named Poon Lim, who worked on board an armed British trading vessel that was sunk by a German military submarine in the year 1942.

As the German submarine struck the British merchant ship during World War II, Poon Lim, who worked as a steward, jumped into the South Atlantic Ocean with nothing but a life jacket. He drifted in the open ocean on a life raft for a hundred and thirteen days until a Brazilian fishing boat eventually found him and rescued him.

The escape from China

In 1932, the Imperial Japanese Army was advancing towards China in an effort to capture certain provinces of China under the Japanese Empire. Young Chinese boys were getting inducted into the army to fight the enemy. Lim’s father being worried sent him to his brother who was working on a British passenger ship. Lim enrolled with the British Merchant Navy and started working as a cabin boy.

Life at sea wasn’t easy for young Lim, who had to constantly deal with sea sickness and racial discrimination. The British were known to ill-treat those they thought were beneath their stature. Unfortunately, the Chinese crew members were not only ragged and subjected to bigotry by the British officers, but also put up in congested living quarters. Tired of the agonising treatment, Lim quit in 1937 and went to Hong Kong to pursue studies in mechanics.

Life wasn’t easy there either, with the threat of Japanese attack impending. By the time World War II broke out, the British were faced with a manpower shortage aboard their ships. The conditions by then were much better, especially for the Chinese workers, and an increased pay was now being handed out to them. Just as the Japanese were on the brink of attacking Hong Kong in 1941, Lim secured himself a job as a second mess steward on a British merchant navy ship, the SS Benlomond.

History has stated the use of cruise liners as camouflaged warships during World War I and II, these merchant ships were armed with guns, torpedoes and other weapons of combat. As a defence mechanism, the British shipping companies had been asked to design fast moving steamers with the provision for loading artillery. At the outbreak of World War II, SS Ben Lomond was sailing as an armed British merchant ship. On November 10, the ship set sail from Cape Town in South Africa, towards Paramaribo in Suriname along the northeastern coast of South America  1942. The norm during the war for ships was to sail in a fleet with an armed forces escort to enable better defence during a surprise attack. Unfortunately, SS Benlomond was sailing unaccompanied with a crew of 54, which included the master of the ship Capt. John Maul, 8 gunmen, Lim Poon, and 44 other crewmen.

13 days later, the armed merchantman was attacked by a German undersea boat (submarine) U-172 which was under the command of Kpt.Lt. (Capt. Lt.) Carl Emmermann. SS Ben Lomond was hit by two torpedoes on November 10, 1942, and vanished under water within minutes. The ship at that time was 6 days away from its destination, approximately 1200 km east of the Amazon river. Poon Lim managed to get hold of a life jacket and jumped off the ship just as the explosion in the engine room occurred.

Lim floated in the ocean for a rough two hours till he came across a wooden raft. He climbed aboard the 8 by 8 inches raft, which later turned out to be a Carley raft (life raft). The Carley raft was a small, square, floating platform commonly used by warships. He found some provisions on the raft which included a forty litre jug of water, tins of biscuits and crackers, some pemmican which is like a beef jerky, a bagful of sugar lumps, tablets of malted milk, lime juice, some chocolate, a couple of signal flares, two smoke signal pots and a flashlight.

By now, Lim was not sure if there had been any other survivors as he could not see anyone around. He hoped that the docking port would set out in search of the missing ship but soon realised it may not be possible in the present war-like situation. The initial days went by conveniently with the water and ration found on board. But soon after the supplies depleted, and Lim had to think innovatively to stay alive. He used the covering of his life jacket to catch rainwater for drinking and resourcefully turned a wire from the flashlight into a fishing hook. He used the hemp rope available as a fishing line, having made a sturdier hook for bigger fish out of a nail in the wooden raft. Lim was not a good swimmer so he always kept himself tied to the raft with a rope around his wrist. He managed to make a knife out of a tin container of biscuits, which he used to cut and clean the fish he caught. He often dried the leftover fish for later use.

At one point of time, after being hit by a storm, Lim was left with no drinking water, dried fish or food supply. He then caught a seagull, killed it with his crude knife and drank its blood to quench his thirst. If this was not harrowing enough, Lim noticed several sharks circling the raft time and again. Determined to survive, he decided to take on a smaller shark, to deter the others away and also because it would supply him with food for a couple of days. A feeble Lim was soon losing the strength to hunt for fish or seagulls every day. Using the remains of a seagull as bait, he managed to hook in a small shark. Once aboard, he struggled to completely kill it. After a little fight, he managed to restrain the shark enough to cut it open. Not only was he able to satiate his thirst but also had ample food for the next couple of days. He was also creative enough to clean the fins and hang them on a rope in the sun for making the popular Hainan delicacy, dried shark fins.

Poon Lim was apparently, sighted adrift a number of times but to no avail. The first time he was sighted, was by a ship where the crew saw him but ignored his presence. Lim concluded that it was, perhaps due to his likeness to the Japanese that he was avoided. The second time, he was spotted by US Navy patrol planes and one even dropped a buoy next to him as a marker. But Lim’s bad luck had still not run out. A storm moved Lim’s raft far away from the marker buoy and he couldn’t be traced. Sometime later, he was spotted by a German U-boat but was left to his fate. He kept a count of days by tying knots in a rope initially, but soon gave that up and resorted to counting full moons for keeping score of the number of days passed.

Lim knew a few days before his rescue that he was nearing land as the colour of the water had changed. On April 5, 1943, the raft was in a river inlet when he was spotted by three fishermen, 16 km off the coast of Brazil. They rescued him off the raft and took him into their boat. Due to the language barrier, neither party could form a comprehensive conversation. Lim was fed on the boat and taken to Belem in Brazil, arriving three days later. Though he had lost nearly 9 kg at sea, he walked out of the boat without any assistance. He was able to narrate his ordeal in Belem and was admitted in the local hospital for four weeks. He was treated for dehydration and severe sunburn. Lim Poon had been adrift for 133 days till the day he was rescued by the fishermen.

His return to London was organised by the British Consul in Brazil via Miami and New York. He had become a celebrity by now and people thronged to him to hear about his adventure. When he was told that he had created a record of surviving on a raft, he said, “I hope no one will ever have to break that record“. He returned to London where King George VI conferred upon him the British Empire Medal (BEM) for his courage. His experience was catalogued by the Royal Navy in survival manuals for inspiration and practical purposes. Poon Lim with the US Navy being presented with tempered glass signaling mirror as part of rescue equipment. (National Museum of the U.S. Navy / Flickr)

Enjoyed this article? Also, check out “1972 Andes Plane Crash – The Descent to Cannibalism“.