Phantom Island: The Islands that Might Have Existed Only in the Imagination 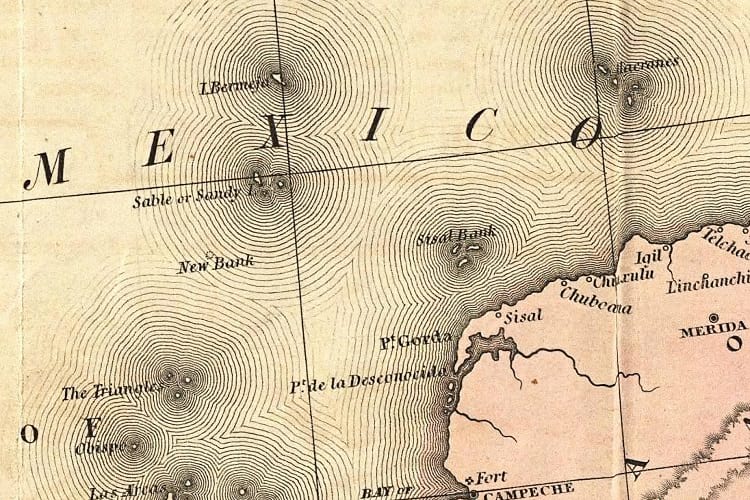 Phantom islands are islands that once appeared on nautical charts and maps but do not actually exist. There are various reasons for this. Some islands may have been purely mythical creations from old legends. Others may be deliberate fabrications, while others are geographical errors, optical illusions, or lands lost due to natural catastrophes.

Phantom Islands and the age of exploration

The Age of Exploration was a grand period in the history of mankind. The earth and its realms were a mystery to most people back then. There were many things they didn’t understand, and they tried to explain these with legends and fantasies.

As you can imagine, discovering new lands was a big deal in those times. It turned you into a hero overnight. And, if your home country’s reigning royalty didn’t try to steal your thunder, you could even name the new land after yourself. That could ensure your family was set for the next seven generations at least.

Despite such an incentive, comparatively few brave men actually set forth to traverse the vast oceans and make these new discoveries. The rest of the public remained safely at home and eagerly awaited their return and lapped up their tales of exciting adventures and marvellous sights. Naturally, some of these adventurers couldn’t resist playing to the galley and embroidering their trials and escapades to a good extent. In short, they added fuel to the existing legends.

It was easier to tell tall tales than to discover new lands. Often, to keep up and enhance their prestige, many of the voyagers outright lied about coming across an island or two. Travelling across the seemingly unending oceans for months on end was no child’s play. Sometimes you were glad to settle for an island, even if it was only a phantom island. Back then, nobody was going to take the next boat to go verify it after all. Or, if they did, there could always be a reasonable explanation for not finding it. Moreover, they could return with tales of phantom islands of their own.

In the Western world, the earliest Greek and Phoenician ocean farers began the practice of mapping the world. Piece by piece they tried to put together an entire picture of the earth. Other ocean farers that followed then made use of these charts to navigate the oceans. Furthermore, they added to them as they came across previously uncharted territories.

As a result of this practice, phantom islands also found their way on nautical charts.

However, all these phantom islands were not fabrications. Some were actual islands, but the voyagers got their geographical locations wrong. Or, they were actual islands that later disappeared into the ocean due to volcanic eruptions, underwater landslides, or some other natural disasters. In some cases, the voyagers mistook sandbars, icebergs, floating pumice from underwater volcanoes, and other debris for islands. In other cases, they didn’t survey the land correctly and mistook land that was actually connected to a larger landmass to be an island. Sometimes, the islands they thought they saw were only mirages or optical illusions.

Apart from the voyagers that reported these islands, nobody else was able to find or reach them again.

Despite this, many of these islands remained put on the nautical charts for many centuries. Even if other people couldn’t find them, they retained the hope they might someday be able to do so.

There are several hundred instances of phantom islands from the ages of antiquity to more modern times.

The last phantom island was Emerald Island, said to be near New Zealand. It even appeared in many atlases until 1987.

The Greek poets Homer and Horace created poems on mythical islands like the Isles of Blest. Also known as the Fortunate Islands, these were supposedly Utopian islands where hardships were unknown. Of course, no human ship managed to sight, never mind land on, these fabled phantom islands.

Another famous island of legend was Atlantis. Plato mentions its existence and how it ultimately sank under the sea. The legend of Atlantis persists to the present day and many modern underwater explorers have had a go at finding it on the ocean floor. So far, nobody has been able to find anything that we can with a great degree of accuracy assume to have been Atlantis.

Actual Islands that were misidentified or were subject to geographical errors

In the 4th century BCE, Pytheas, an ancient Greek seafarer, arrived on an island he called Thule. Nobody else ever found it, but, since ancient times to the present age, explorers have argued that Thule was either Scandinavia, Iceland, or the Shetland Islands. Some say it didn’t even exist except in its discoverer’s salt-encrusted imagination.

For quite a long while, Pepys Island figured on the charts. Later, explorers discovered that it was not a different place. Just a different name for the Falkland Islands.

When early explorers to the American continent arrived in the Baja California Peninsula, they did not realize that it was connected to the mainland. Instead, they took it to be an island and noted it on the map as such.

Captain James Cook made a similar mistake when he landed on the Banks Peninsula in New Zealand. He mistook the 1150 square kilometres land mass to be a separate island, when, in fact, it is connected to New Zealand’s South Island on its eastern coast.

Islands that only their discoverers found

Ever heard of New South Greenland? It was also known as Morrell’s land after its discoverer, Benjamin Morrell. While captaining the Wasp schooner on a voyage of exploration in Antarctica’s Weddell Sea, he made his discovery in March 1823. According to the account he gave, his schooner sailed along 480 kilometres along the island’s coastline. He gave details of this and also marked the precise coordinates of the land. Nobody doubted his discovery and New South Greenland was duly added to the ever-expanding world nautical chart. However, in the 20th century, voyages to Antarctica proved conclusively that there was no such land. Captain Morrell, it turned out, was just another one in a long line of fabricators.

Islands that might have existed but no longer do

Spanish explorers of the 16th century came across Bermeja Island along the Yucatan peninsula’s north coast. In 1539, Alonso de Santa Cruz included the island in his El Yucatán e Islas Adyacentes. By 1844, however, British cartographers reported it had sunk underwater. There have been various theories about its disappearance. The best one involves the CIA—they sank it to extend the USA’s economic zone.

In 1825, George Norris, a captain of a whaling ship, came across Thompson Island in the South Atlantic Ocean. Another vessel reported sighting the island in 1893. Nobody ever saw it again thereafter. Researchers think it probably sank into the ocean after a volcanic eruption. However, until 1943, the world maps continued to include it.

Phantom islands are a relic of a bygone era when one could cast an eye at the horizon and wonder about magical, mysterious lands that might exist way beyond. We now live in a somewhat more jaded age where some scientists actually think that there is nothing more for us to discover. They talk of ‘settled science’. Well, folks, nothing is that settled. As long as we are alive, there are discoveries to be made, even if only on the personal level.

Enjoyed this article? Also, check out “When Default Becomes De facto: Island of California, the Cartographic Mistake Which Became the Gospel Truth“.

Previous Article
Zoroastrianism: The Oldest Monotheistic Faith is Now on the Verge of Extinction
Next Article
Rape of Nanking is One of the Most Brutal and Forgotten Genocides of 20th Century