Pan-American Highway: The Longest Road in the World Measuring About 30,000 Kilometres Constructed in the year 1936, the Pan-American Highway is a web of roads stretching across the continents of North and South America. The nomenclature for this particular mode of transport is a representation of the fact that the highway connects almost all of the Pacific coastal countries. According to the Guinness World Records, this highway is the world’s longest motorable road of about forty-eight thousand kilometres, in total length with a break of about one hundred and sixty kilometres which is called the Darién Gap. 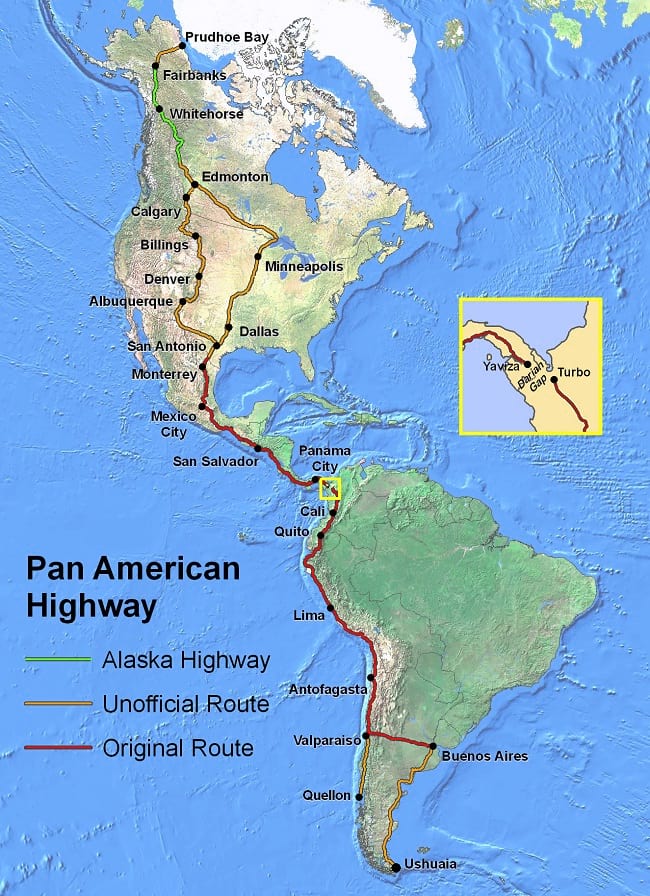 Imagine being on a road trip that is equivalent to living through a time-lapse depicting changing weather conditions. A journey on the Pan-American Highway will allow you to experience exactly this. The highway passes through a diversification of climates and ecological types, including dense forests, arid deserts, barren Tundra regions, mountains, prairies et al. However, some of these places have a chance of being extremely dangerous.

Beginning at Prudhoe Bay in Alaska, North America the highway winds down till Ushuaia, in Argentina. Originally, the concept of connecting the two tips of the Americas witnessed its first proposal in 1889 at the First Pan-American Conference, as a rail road. The idea never saw the light of day, but what did was the highway at the Fifth International Conference of American States in 1923. This eventually resulted in an agreement for the speedy construction of the highway, five years later.

The Darién Gap: A leap of faith

The only flaw in the entire project, which is unavoidable, is the fact that the highway does not have a direct link from Central America to South America. This disruption in the construction is also quite commonly referred to as the Darién Gap. The Darién Gap is a stretch of marshland which terminates the highway at Turbo, Columbia and Yaviza, Panama. The gap is about a hundred and twenty-five miles of dense forests, unruly rivers, low and rugged mountains. Construction through the swamp, marshes and rivers would have been a very expensive project. Although, elimination of this gap is tireless and has had endless effort invested over several years.

Proposal of bridging this gap is a controversial one with constant conflict with environmentalists. The proposal has been acted about a couple of times. Fortunately, though, the environmentalists could hinder progress with evidence of irrevocable environmental damage. The Darién Gap is, quite naturally, an abode for adventurers. Several attempts have been made of driving through this gap, chancing upon more failures that success. The only option, however, that satisfies both conflicting sides is the construction of a ferry link from Columbia to a new ferry port in Panama.

As convenient as such a highway may sound, all is not so well regarding the journey across it, and the entire route contains several challenging sections that require more precaution than one might believe. One of these is popularly known as “Cerro de la Muerte” which literally translates to “Mountain of Death” or “Summit of Death.” The history behind its name is the fact that crossing the mountains from Valle Central is a three or four day trek on foot or on animals. In the past, the mountains witnessed several travellers succumbing to the cold and rain.

The main reason behind the danger of crossing this region via the highway is its sudden elevation. The highway reaches a peak from which two routes break off. One is a hiking trail and the other is a passage for vehicles to pass through. This region is generally considered to be the point of the highest elevation on the Pan-American Highway in Central America with an altitude of ten thousand nine hundred and forty-two feet. At this height, temperatures dip to below freezing point at night, but it is balanced by the shining sun during the day. Susceptibility to sun burns, however, is relatively easy due to the thin air.

The Pan-American Highway has many such fascinating tales associated with it. Thousands of people are always attempting to drive through this highway only to return with truckloads of memories to cherish. Tim Cahill, a famous travel writer set a record from Ushuaia to Prudhoe Bay in 24 days. He went on to write a book called Road Fever, about his experience.

The Pan-American Highway is a journey of scenic wonder. It is often featured on bucket lists for several people around the world. It is essential that enough research and exhaustive preparation is carried out from beforehand. It is of utmost importance that a map of the entire journey be carried and should be thoroughly read. It is a very long trip and duration varies from traveller to traveller, usually ranging between nine to twenty-four months unless you are Tim Cahill. It is truly a once in a lifetime experience, a chance to drop into countries like it’s the next neighbourhood, overstaying your welcome over a cup of tea or a glass of beer only to hit the next explorable paradise.

Enjoyed this article? Also, check out “China’s ‘One Belt, One Road’ – The Economic Project That Might Reshape the World“.

Previous Article
The Time Pyramid of Wemding: A Pyramid That is Scheduled for Completion in 3183
Next Article
Bell Boeing V-22 Osprey: Two-in-One of Helicopter and Airplane