P. T. Barnum: The Colourful Life of the ‘Greatest Showman’ to Have Lived Phineas Taylor Barnum, more commonly known as P. T. Barnum, has been hailed as the ‘Greatest Showman’ to have ever lived. Barnum was born on July 5, 1810 in Bethel, Connecticut. He was an American promoter, who became extremely successful when he moved to New York City.

He is famed to have created some of the most popular things like the beauty pageant for babies, the moving billboard, and the outdoor spotlight among other things. He was responsible for the most successful and popular museum and circus during his time. He organized exhibits featuring ‘freaks’ that were a part of his sideshow. These included midgets, giants, women with beards, fat women, a man without a leg, a boy without an arm, and two dwarfs who were from Ohio (famously known as the “Wild Men of Borneo”).

Other than being a brilliant showman, Barnum was also very good at sales and essentially scamming people. He sold tickets to people saying that he was showcasing a mermaid, whereas in reality, it was only a tail of a fish that was attached to the body of a female orangutan with the head of a baboon. He called it the “Feejee Mermaid”, which was only a hoax that he employed to promote his American Museum. The Hollywood blockbuster, “The Greatest Showman Ever”, starring Hugh Jackman is based on the colourful life of Barnum. 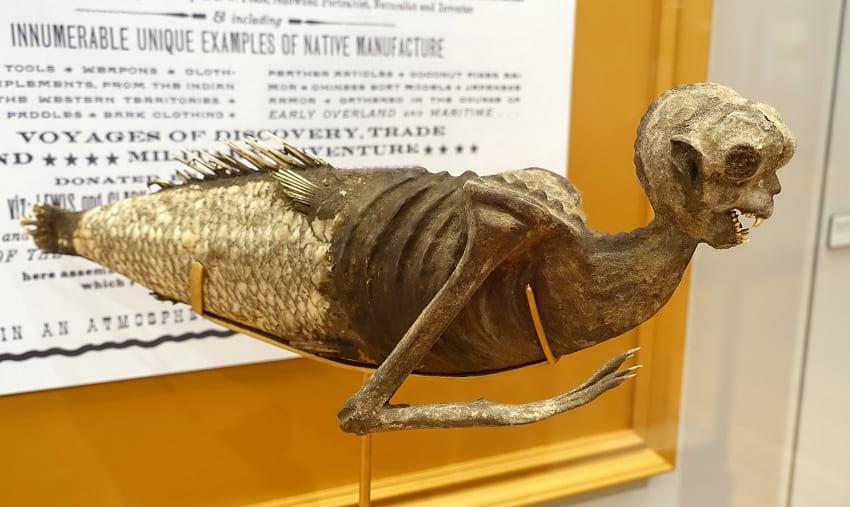 P. T. Barnum’s father, Philo Barnum, was a man who wore many hats. He was a farmer, grocer, tailor, as well as a tavern keeper. His father had two wives, who bore him a total of ten children. P. T. Barnum was his father’s sixth child by a woman named Irene. Barnum’s grandfather was rather boisterous and occasionally liked to indulge in practical jokes. It was his grandfather’s personality and love for practical jokes that Barnum inculcated, which aided his legendary rise in the show business. Barnum spoke about his grandfather saying that, he “would go farther, wait longer, work harder, and contrive deeper, to carry out a practical joke, than for anything else under heaven”.

P. T. Barnum worked with his father as a farmer till 1825. After his father passed away, Barnum began to work at a general store. He married Charity Hallet in 1829. The two had four daughters, though their youngest daughter died as a child.

The start of his career: The gig that changed his life

In the summer of 1835, when Barnum was only 25 years old he got into the entertainment industry. One of his customers, Coley Bartram, told Barnum about an African American woman named Joice Heth. Bartram was aware of Barnum’s fascination for the ‘rare’ and the ‘strange’. He said that Heth was a “curiosity”, who was allegedly a nurse to the former president of America, George Washington. She was apparently 161 years old.

Barnum went to Philadelphia to see Joice Heth after he also came across a newspaper article, according to which she was “one of the greatest natural curiosities ever witnessed”. Intrigued, Barnum decided to take Heth to New York, to showcase her and earn money. He labelled her as “the greatest curiosity in the world”. 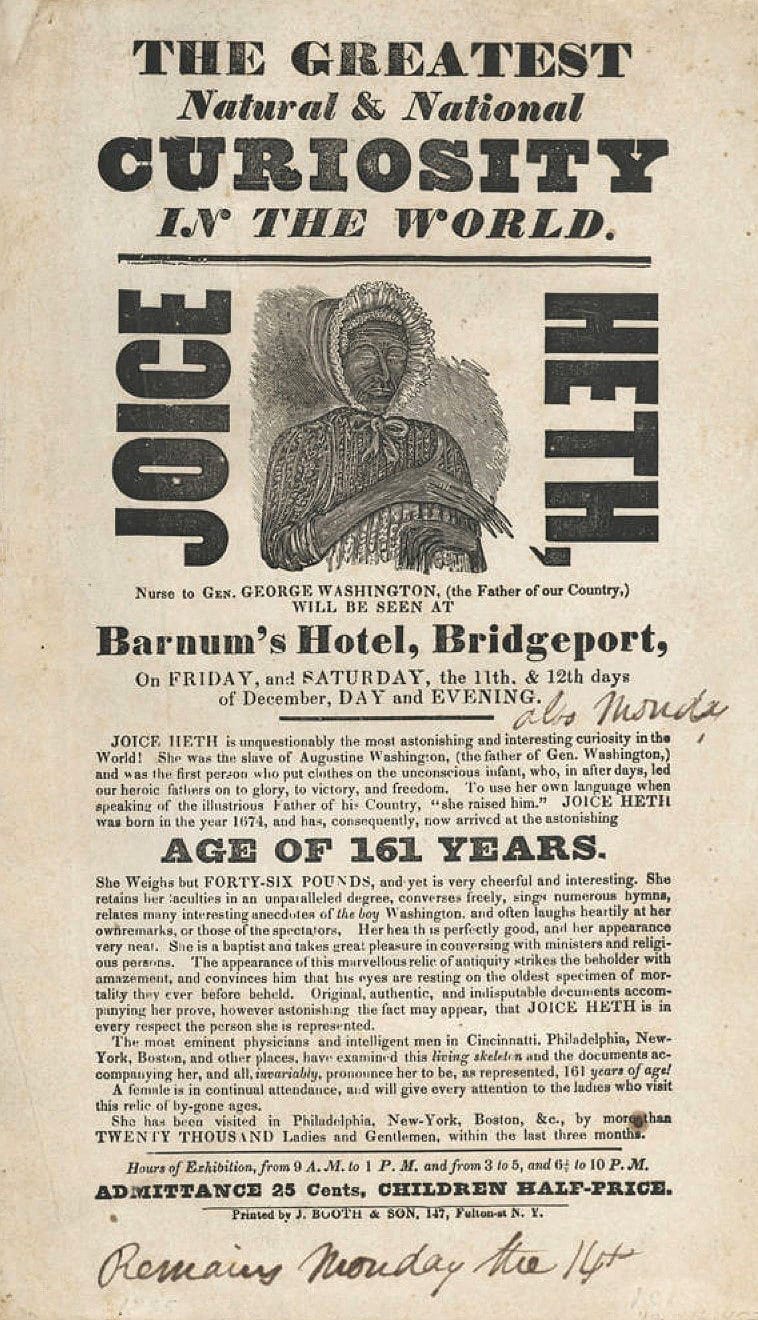 However, people’s interest in Heth soon began to fade, and Barnum then took her to New England. He later, spread a rumour saying that she was not human but in fact an automaton. He said, “What purports to be a remarkably old woman is simply a curiously constructed automaton, made up of whalebone, India rubber and numberless springs…”

After Heth died, her autopsy revealed that she could not have been more than 75 to 80 years of age. Barnum was exposed as a hustler. However, he solved this problem by saying that the real Joice Heth was still alive and living in Connecticut. Through this chapter in his life, Barnum wrote, “I had at last found my true vocation.”

In 1841, Barnum bought Scudder’s American Museum which was for sale, and he called it “Barnum’s American Museum”. This was his “ladder” to success in the show business. Within the first three years, since Barnum had purchased the museum, he had earned over $100,000. He ran the museum from 1841 to 1868.

Inside his museum, Barnum showcased several “odd” creatures that he took meticulous care to find. He had “giants”, Native Americans, dog shows, the Feejee Mermaid, as well as a working replica of the famous Niagara Falls. In 1842, he found Charles Stratton who was only 25 inches tall and weighed a mere 15 pounds. Stratton was four years old when he met Barnum. Barnum took the opportunity to showcase the boy and advertised him saying, “General Tom Thumb, a dwarf of eleven years of age, just arrived from England.” Stratton’s popularity as ‘General Tom Thumb’ led to a huge travelling tour to Europe where they met Queen Victoria, the monarch of Britain. 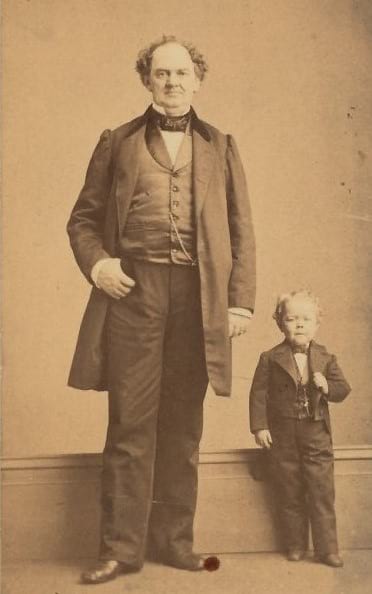 In the 1850s, he began managing Jenny Lind, who was called the “Swedish Nightingale”. Barnum told her that she would receive $1000 for each show that she performed in the United States and in Canada. Even though he had never heard the opera singer sing before, he promoted and publicised her shows hoping to improve his image. Lind performed 150 shows, and Barnum earned a profit of more than $500,000.

In 1865, there was a massive fire which destroyed Barnum’s Museum. However, he opened another museum subsequently. Unfortunately, this too burned to the ground due to a fire in March 1868.

The greatest showman and his legacy

In 1871, Barnum started his travelling circus, which later came to be known as the Ringling Bros. and Barnum & Bailey Circus. Initially, after leaving the museum business, Barnum had partnered with Dan Castello and William C. Coup, who were both circus owners. Together they started ‘Barnum’s Grand Travelling Museum, Menagerie, Caravan and Hippodrome’, and Barnum had complete control till 1875. He referred to it as “The Greatest Show on Earth”.

In 1881, he partnered with two circus managers, James A. Bailey and James L. Hutchinson, and the very next year, they introduced an elephant to the circus, from the Zoological Society of London. Jumbo, the elephant was 11.5 feet in height and weighed approximately 6.5 tonnes. Like all of Barnum’s other ‘exhibits’, Jumbo was also a tremendous hit with the audience.

Due to his old age, Barnum gave up the complete control of his circus in 1887. The circus was subsequently renamed as the “Barnum and Bailey Greatest Show on Earth”. He died in Bridgeport, Connecticut, in 1891. Following his death, the rivals of the Barnum and Bailey Show, the Ringling Brothers, bought it. The two were merged to form the ‘Ringling Bros. and Barnum & Bailey Combined Shows’. In May 2017, this legendary circus founded by P. T. Barnum held its last performance, but the gilded appellation of the ‘Greatest Showman’ lives on.

Previous Article
Sleep Paralysis: A Reality Check on the Sleep Induced Immobility
Next Article
Hashima Island: A Once Bustling Japanese Metropolis That Now Reminisces Its Hauntingly Tragic Past