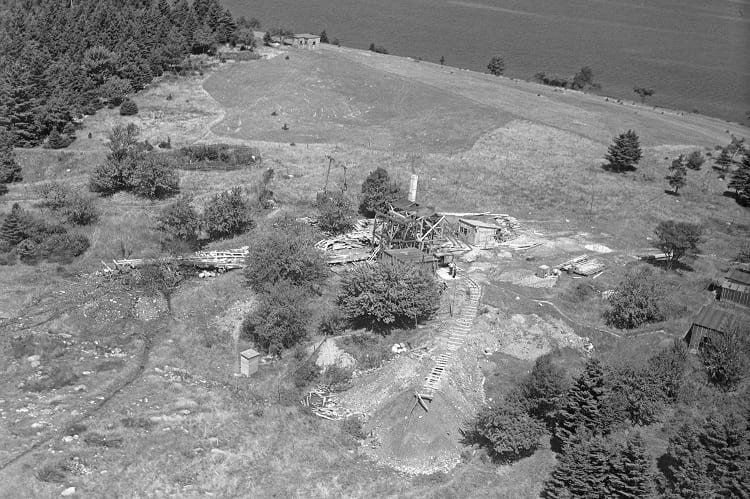 The story of the Oak Island is replete with elements of mystery, enchantment and even tragedies. However, it’s not the island in its actuality that people are inquisitive about. It increasingly centres on the inexplicable treasure and unexplained objects that are seemingly stockpiled and concealed somewhere inside the island.

Be that as it may, does the conundrum allude as to why no one has figured out how to discover this hidden treasure trove, or whether the fortune even exists by any stretch of an imagination?

Oak Island is an expansive plot of land sprawling over 140 acres is situated along Canada’s Atlantic drift off the shores of Nova Scotia. Treasure hunters intrigued by the enigmatic island are lured to what has been famously dubbed as the “money pit.”

These confident fortune seekers were also beady-eyed about the Nolan’s Cross which is presumably a gigantic cross that pinpoints to the place of the secret treasure that supposedly consisted of artefacts like Marie Antoinette’s jewels and gems, Shakespearean manuscripts and other religious artworks. It’s an enormous and distinct cross formed of huge boulders that brought forth hordes of speculations and theories about its inception and what it reflects.

The razzmatazz over the likelihood of wealth enshrouded in the Oak Island is relatable to the “Golden Age of Piracy” of theft and piracy which happened between 1690 and 1730. Many European settlements did not exist in Nova Scotia at the time.

This made the Oak Island a favoured destination stop-over for freebooters who arrived from the Boston frontiers because of the island’s plenitude of unexplored landmass and natural resources. Also, in light of the fact that the zone was far away and secluded, it was considered an ideal location to reserve their booties. 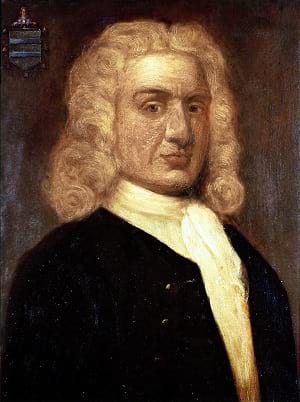 According to early theories, the pit accommodated a pirate treasure that was interred by Captain Kidd, a rover who reportedly hatched a conspiracy with Henry Avery and made Oak Island their community bank.

Early settlers recounted an account of a moribund sailor Gordon Chase from Captain Kidd’s crew who claimed that a fortune worth £2 million was buried in the island. However, his attempts to unravel the riches ended abruptly after he was assaulted and wounded by a different treasure stalker, Micheal J Whynot.

Most of the accounts exhibit concurrence that the first suspicion about the treasure was conjectured in 1795. According to a widely-known story, a young boy named Daniel McGinnis observed flashing lights from a far-off island in Nova Scotia.

When he visited the island to conduct some exploration at the sight, he discovered an extensive circular depression on the ground. The island was densely forested. However, in the zone around the depression, it was evident that a few oak trees had been felled.

As the legend goes, McGinnis convinced and recruited some friends identified as John Smith and Anthony Vaughn to start excavating the land. After burrowing, McGinnis and his mates ran over massive oak timber platforms at every 10 feet, trenching down no less than 30 feet. They noticed specific and ambiguous “marks” at each of these intervals.

They could surmise that something of paramount significance was buried. Yet they left the spot as there a requirement of a bigger and better-financed campaign to reveal whatever was hidden underneath.

The very next year they returned, yet they could never go deep beyond 108 feet. For, at whatever point they touched that mark, water mysteriously used to inundate the pit.

200 years after that first expedition, innumerable treasure hunters have dared to venture into the Oak Island. From adventurists to businessmen to explorers, irrespective of all the past endeavours that fizzled out and still undeterred, came to the island, being convinced that they would be able to uncover the hidden valuables. Strange peculiarities found en route, just added fuel to the fire to disentangle the mystery and temptation to explore the Oak Island. 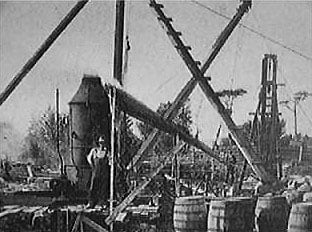 Around eight years after the failed McGinnis dig, Onslow Company cruised to the Oak Island from the central Nova Scotia. They proceeded with the excavation work down to a depth of 90 feet and discovered charcoal layers, coconut fibres and a large stone engraved with symbols. The excavation project was later discontinued without any fruitful end-result, when the pit was flooded with water and safeguarding became inadequate.

In 1849, the Truro Company was formed by investors who started the excavation work again. They could drill to a depth of 98 feet when the pit was flooded again. At the end of their pursuit, they could drill to hit oak layers, a spruce layer and few metal pieces yet, without any substantial outcome.

In 1861, the first incident of death and tragedy struck the island when a man was fatally wounded and later succumbed to the injuries after a boiler was detonated and blown up.

In the same year, a newly formed company, Oak Island Association, comprising of hopeful treasure trove hunters, attempted new ways to secure the treasure but in vain. Water surged into their digging up and the “money pit” plunged further to a depth of more than 15 feet.

Various other techniques were attempted consistently to discover the Oak Island treasure that included efforts to block the water flow and separate drilling activities in different parts of the island.

Even Franklin Delano Roosevelt needed to partake in the action and monitored the island’s activity closely. In 1909, he enrolled for affiliations to the Oak Island Association and Old Gold Salvage, another fortune chasing group. In spite of the fact that the groups departed from the island that same year, Roosevelt pursued to keep tabs on the Oak Island news during his entire presidency tenure. 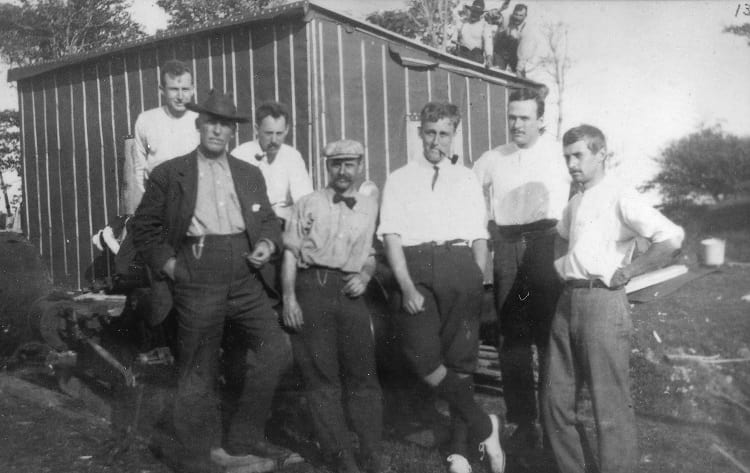 Photograph of Franklin D. Roosevelt and his associates at Oak Island in 1909. (National Archives and Records Administration)

Between 1928 and 1939 William Chappell and Gilbert Hedden undertook exhaustive excavation projects none of which were successful. At a depth of 127 feet, William Chappell could unearth a few artefacts that included a fluke anchor, an axe, and a pick. Other than that, there was no trace of any worthwhile treasure.

Alongside the mishaps and disappointments, revelations were also made that sustained the Oak Island treasure chase and kept it alive. In 1939, amid drilling, gravels and rocks were chanced upon by Erwin Hamilton.

He professed that they were very much unfamiliar to the area which hinted at the possibility of some foreign encroachment. He likewise asserted that he came across a layer of natural limestone deep down at 176 feet, beyond which he found wood.

Death of Robert Restall and his son

On August 17 1965, disaster struck once more. Robert Restall, his accomplice Karle Graeser and his 18-year-old son were excavating the island when Restall was grossly dazed by noxious hydrogen sulfide fumes and succumbed to death.

Restall’s son, who followed him alongside Graeser and two other workers, Andy DeMont and Cyril Hiltz, eventually lost consciousness. None of them, except DeMont, survived the spurious fumes and returned alive at the end of that fateful day.

Indications of the existence of a treasure

Those looking for the treasure have had their reasons to believe that it does exist with the ample indications and findings of the ruffled surfaces of the earth and sand, oddly carved stone plaques and wood and the hypothesis that the inevitable flooding is an intricate booby trap.

Cynics, beside the conspicuous fact, that no treasure had ever existed in the island also claim that the artificial “flood tunnels” which every time obstructed the uncovering of the treasure too have no proven evidence. They likewise state that the Oak Island is bestrewn with natural sinkholes.

Ultimately, the treasure has been unearthed from the cursed Oak Island. It’s a brooch that is believed to be a morsel from the lost whopping treasures of Marie Antoinette, who was the last Queen of France. The brooch contained a 500-year-old multi-faceted and uneven red-coloured rhodolite garnet gemstone.

The breakthrough discovery was carried out by brothers Rick Lagina and Marty Lagina along with metal-detecting expert Gary Drayton, all of who forefront the treasure hunt down in Oak Island. The brooch’s uncovering came minutes after Gary Drayton and Rick Lagina also discovered an ancient military cuff button that could have dated back somewhere between 1780 and 1820.

Apart from the gemstone, other worthwhile discoveries made by the Lagina brothers include a Roman sword and Portuguese carvings which have lineage to the Aztecs. In 2010 the Oak Island Treasure Act was passed prohibiting any further attempts to hunt for the treasure.

Enjoyed this article? Also, check out “The Fascinating Tale of the Lost Treasure of the Beale Ciphers“.

Fact Analysis:
STSTW Media strives to deliver accurate information through careful research. However, things can go wrong. If you find the above article inaccurate or biased, please let us know at feedbac[email protected]

Previous Article
Kola Superdeep Borehole: The Deepest Borehole in the World That the Soviets Drilled in the Kola Peninsula
Next Article
Children of Llullaillaco: Where Young Children Were Sacrificed to the Gods