Neuschwanstein Castle: The Story Behind the Iconic Bavarian Castle That Inspired the Disney Castle 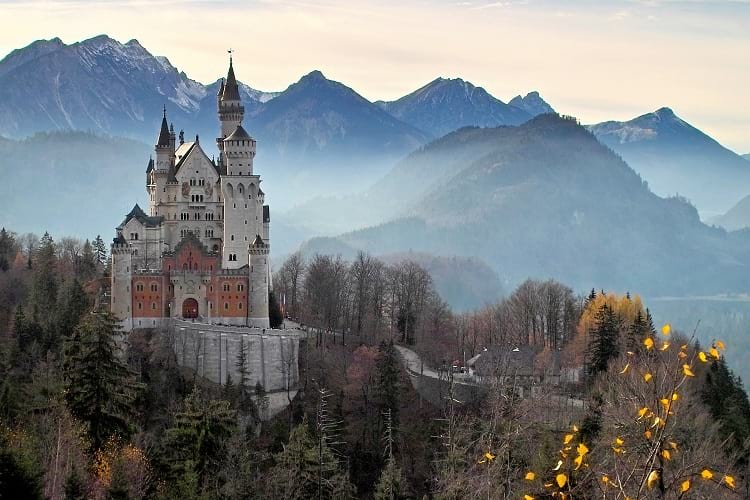 An imposing Romanesque structure, Neuschwanstein Castle is one of Germany’s most well-known castles. It stands poised on a hill in the Alpine foothills in Bavaria, 120 kilometres to the south of Munich and above the small village of Hohenschwangau. Built as a private retreat in the 19th century by Ludwig II, the King of Bavaria, it looks like something straight out of a fairy tale. If you have seen Sleeping Beauty’s castle in the Walt Disney film, you will notice the similarity with Neuschwanstein Castle. It was the inspiration for the Disney version. 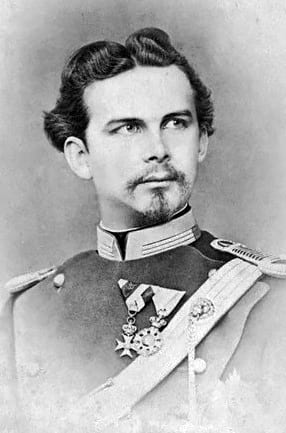 In the mainstream media, Ludwig II is often referred to as the Fairy King — for the fairy tale castle he built — and as the Mad King — a diagnosis made by a so-called doctor, who personally never examined him, and which is quite without merit and most certainly a political gambit on part of his opponents to dethrone him and seize power in Bavaria.

For someone who designed and built an enchanted castle, Ludwig II, unfortunately, did not live an enchanted life.

Growing up, he was not close to either of his parents. He was brought up almost entirely by servants and tutors, and it was a strict, even harsh upbringing. There was none of the personal freedom that most young boys of a similar age might take for granted. After all, he was the heir to the Bavarian throne, and he was never allowed to forget that.

In 1864, after the death of his father King Maximilian II, he ascended the throne of Bavaria. He was only 18 years old at the time, with a shy, reclusive personality that was entirely unsuited for the governing of a nation. He tried not to rock the boat by continuing his father’s policies, but he hated public gatherings and attending to court affairs. As much as possible, he took to avoiding these and began spending more and more of his time engaged in creative pursuits.

Four years after his coronation, in February 1868, Ludwig I died – that is, the new King’s grandfather and the former King of Bavaria, who had, years earlier, refused to become a constitutional monarch and had, therefore, stepped down in favour of his son. The former King’s death meant that the considerable sums of money that had, so far, been spent on his estate could now be diverted to other projects. Ludwig II decided to use the money to finance a private retreat that would exemplify the romantic Medieval architectural style.

Contrary to what some media sources reported, he never used public funds for Neuschwanstein Castle or any of his other building projects. Even so, his ministers were angered by his lavish spending on his personal projects and his lackadaisical participation in the country’s politics. He, however, remained popular with the Bavarian public.

The idea of Neuschwanstein castle

Ludwig II grew up in the family castle, Hohenschwangau Castle. Close by, higher up in the mountains, were the ruins of two medieval castles — Vorderhohenschwangau and Hinterhohenschwangau — that greatly fascinated the young Prince. He often went hiking to the ruins and made several sketches of them. The idea of building a castle here along the medieval lines came to him first during this time.

Later, after he became King, he was able to set this plan into motion.

In a letter to Richard Wagner – the great German musician whose magnificent operas Tannhauser and Lohengrin had also played a pivotal role in inspiring him to build the castle – the King expounded on the beautiful environs near Poliat Gorge. The natural scenery, he assured Wagner, possessed a grandeur that seemed straight out of the mythological realm of his operas.

Given his passion for Wagner’s operas, it wasn’t surprising that Ludwig II hired Christian Jank, a stage designer and scene painter, to come up with the designs for the proposed castle. He also hired Eduard Riedel, an architect, to render the architectural drawings. He himself remained involved in every step of designing Neuschwanstein Castle. He rejected designs inspired by the Nuremberg castle and asked that the designers look more toward the Wartburg Castle for inspiration. Furthermore, he demanded that the designers present him with detailed designs and insisted on approving every single design draft. His involvement and tight control on the design drafting process meant that it was eventually his own design that was finalized. The castle that was finally built was more his creation than that of the designers. 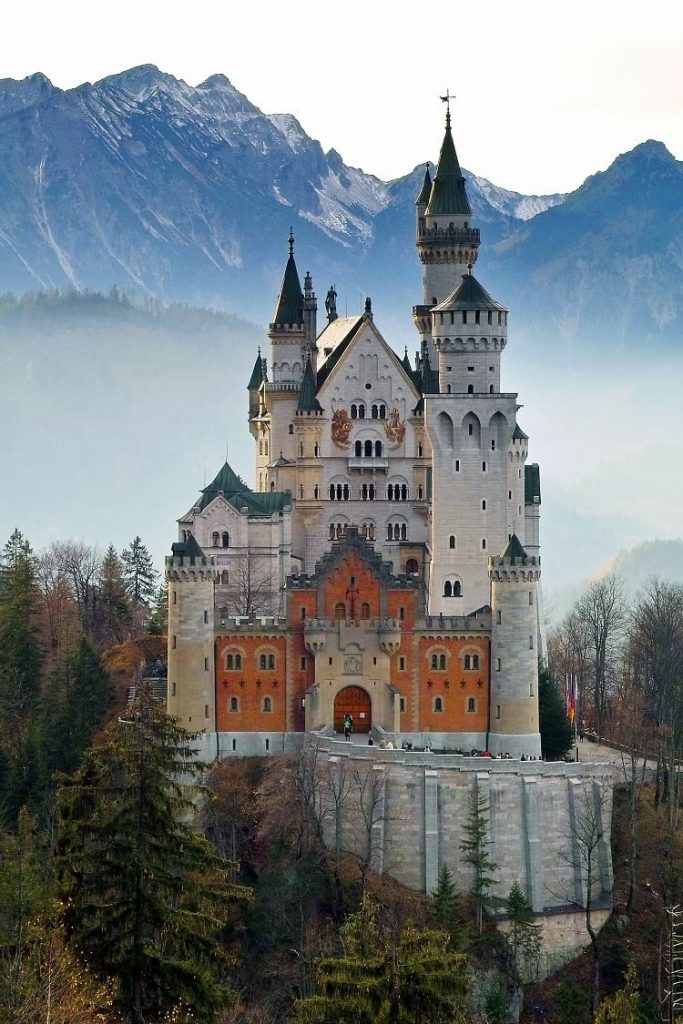 The front elevation of the castle. (Max Pixel)

The architecture of Neuschwanstein castle

Ludwig II strove for a medieval effect that was mixed with the latest technical innovations of the 19th century. The castle had flush toilets, advanced kitchen gadgets, and electricity.

While Neuschwanstein Castle is much admired for its combination of Romanesque, Gothic, and Byzantine architectural elements in present times, many of the leading Bavarian architects of the period looked upon it as kitsch.

The construction of Neuschwanstein castle

Neuschwanstein Castle took 14 years to build and, in this period, it provided steady employment to a large portion of the local population. The building work began in 1868 with the demolishment of the ruins of the two medieval castles. While Ludwig II had, earlier on, wanted to incorporate the two castle ruins into the new castle, it soon became clear that this could not be possible for structural reasons.

On 5 September 1869, the builders set the foundation stone and worked on finishing the castle cellar. It took them until 1872 to finish that and it was four years later, in 1876, when they completed the castle’s first floor and the gatehouse. While brick was used as the primary construction material, the castle façade was in rock, sandstone, and white limestone. In 1880, the builders held the castle’s topping out ceremony, and, two years afterwards, a portion of the castle was ready and furnished. Ludwig II moved into the furnished section of the castle in 1884 and kept an eye on the ongoing work. It wasn’t all a smooth progress. There were accidents in which workmen died and, also, the King had several differences with the builders and changed the overseer a couple of times. For instance, the work began under Eduard Riedel, but the King replaced him with Georg von Dollmann in 1874, and, later, he replaced Dollman with Julius Hoffman.

At the time Ludwig II moved in, only 14 rooms in the castle were completed and furnished. These included his personal suite on the first floor, the Throne Room, the Singer’s Hall, and the Grotto. All these rooms are decorated with elements from Wagner’s operas.

The finished castle is an asymmetrical, elongated building with towers, balconies, turrets, gables, and roof cornices with pinnacles. The gate building facing the east has a red brick facade and the portions facing the court have yellow limestone facades. There is a moat as would befit a real German Knight’s castle, but the castle fortifications are mostly decorative. There was to be a massive keep in the upper courtyard, but only its foundation was built and the rest of it remained unbuilt upon the King’s death. In 1886, Ludwig II was arrested in his bedroom at night and taken away forcibly in a carriage to Berg Castle. The next afternoon, he and Dr. Bernhard von Gudden, who had arrested him, went for a stroll on the shores of Lake Starnberg. When they didn’t return, the guards went to look for them and found both men dead in waist-deep water. They both appeared to have been strangled.

To this day, nobody knows exactly what happened, although there are many theories. The most popular one is that the King had arranged an escape with some royalist supporters and this, unfortunately, was foiled. The King’s cousin later reminisced about him and said he was eccentric, not mad, and he should not have been treated the way he was.

He was able to spend only 11 nights in his beloved castle.

You can visit Neuschwanstein Castle throughout the year. In fact, you ought to see it in different seasons to get an idea of how beautiful it looks against the changing landscape. Plenty of people have the same idea, however, so expect a crowd when you visit.

Neuschwanstein Castle allows visitors only as part of a group, and you can choose if it is to be a small group or a large one. The guided tours start from Munich and generally last an entire day. In addition to seeing the grand interior of the castle, you can take in the picturesque landscape and the breath-taking panorama of the Alps.

Enjoyed this article? Also, check out “Hochosterwitz Castle: The Medieval Castle in Austria That Remained Impregnable from Enemy Attacks“.