The world is full of several architectural beauties which will leave you amused by their intricate art and fine carvings. One such architecture stands tall in Normandy and has emerged as one of the major tourist sites in the world. This architectural grandeur is none other than Mont Saint Michel which got classified as a historical monument in the year 1874. In addition to this, it is also regarded as a UNESCO world heritage site since the year 1979.

Known as one of the best middle-age creation, Mont Saint Michel is an epitome of monastic architecture. It is situated 41 miles away from Rennes and 32 miles away from Saint-Malo. On the base of the monument, you can also find medieval towers and walls displaying the old style architecture.

A tiny tidy island perched on the north-western coast of France, this place witnesses the highest tides. It is also known for its quicksand and steep rocks. The water surrounding the coast can go 20 Km deep and 18 Km away. Initially, this fortress was called Mont Tombe. This was when Mont Saint Michel was not considered as an island. It was merely covered by dense forests which later got washed away due to ocean water. This place is popular for its Mont Saint Michel Abbey which is around 1000 years old. On your visit to Mont Saint Michel, you can’t miss out on the popular Carolingian church that was constructed during 966 by the Benedictine monks.

Apart from the abbey, you can also explore the vertical grounds in the mountain or enjoy the serene view and shop something from the souvenir store. If you are a foodie, you will love their scrumptious omelettes which are found in La Mere Poulard. The restaurant also provides other French delicacies at a very reasonable rate. Normandy is famous for the apple orchards. So, once you are here, don’t forget to taste the cider.

History of Mont Saint Michel before the revolution

Mont Saint Michel is circular shaped and comprises a granite outcrop which rises heavily out of the bay. It is normally surrounded by huge sandbanks which get converted into the island during high tides. A 300-feet causeway links the island to land. However, before its construction, it was tough to find a way because of the fast-tides and quicksand.

The prolonged history of Mont Saint Michel started in 708 after Bishop Aubert built a sanctuary as a tribute to Archangel. In 966. Benedictine monks took the responsibility of building a new monastery. In no time, Abbey became a prominent pilgrimage canter in the Christian West. In addition to this, it also got a name for storing a trunkful of manuscripts. Due to this, it was also being called as “City Of Books”.

Situated on the borderline of Brittany and Normandy, Mont Saint Michel became a passage, as well as, a fortress. In the 14th century, the conflicts between England and France took a major turn and hence, there was a need for power fortification.

In the year 1421, the church’s chancel collapsed and its reconstructions went on for the next 100 years. Uptil 18th century, the Mount already lost its significance in religious, as well as, military terms. In 1622, a new religious order was being established at the Abbey which led to the redevelopment of the site.

Story after the revolution

During the war period of 100 years, Mont Saint Michel again turned into a fortress. Along with the inner wall, an outer wall was also added for the defence of the abbey. Both Valois and Plantagenets were claiming the French throne.

With the 1517 reformation, this site also lost its pilgrims. With the reduction in the number of pilgrims, the monks too disappeared. During the 1789 French Revolution outbreak, there were just a few monks in the residence and the Abbey turned into a prison. In the initial stage, it was home to clerics but later, they were replaced by political prisoners.

To preserve the beauty of Mont Saint Michel, the car parking has been relocated to some other place. This new parking is situated 1.5 miles away from this island. After parking, people head for shuttle buses named Passeurs. These buses will take you to your destination, i.e, Mount. The Passeurs operate on a regular basis between 7:30 Am to 12:00 AM. Mont Saint Michel can be reached by car, as well as, tour or bus.

However there is no direct connectivity of train from Mont Saint Michel to Paris, but you can avail train service till Pontorson and use the bus for the rest of your journey. Many people also reach the place by bicycle. Parking for this ride is free of cost and one can easily cover the distance between Pontorson to Mount without facing any major difficulty.

Fall and spring seasons are comparatively less crowded and the weather also supports an outdoor trip. However, if you wish to see the castle’s reflection in the water, check the schedule of the tides and visit the place during the time of highest tide. 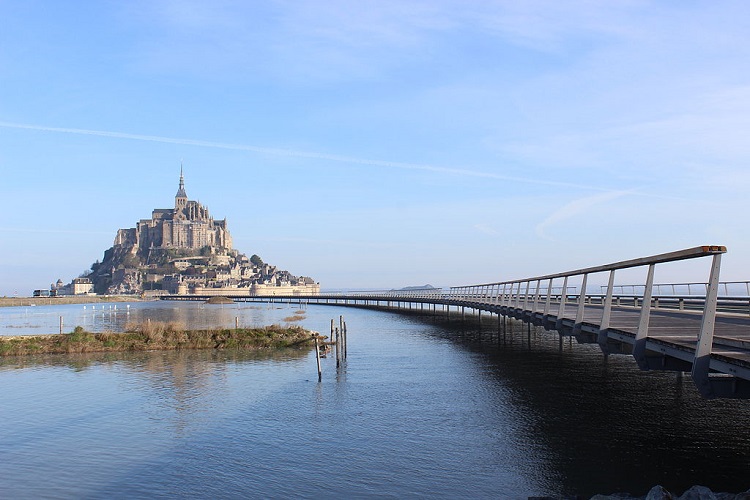 Accommodating in the Island Destination

Mont Saint Michel comprises numerous small hotels which are perched on the island. In addition to this, there are several hotels opposite to the island too. A shuttle bus which runs till midnight links the island to these hotels. You can also find some decent hotels in the town near Pontorson. However, most of the visitors prefer to day trip as this island can easily be covered in just a few hours. The car park also allows the motorhomes for an overnight stay and charge it in the form of standing parking cost.

Mont-Saint-Michel is the most popular island in the world. Being the most unmissable site in Europe, this place witnesses a flock of tourist throughout the year. The place is a perfect blend of rich medieval history, opulent architecture, and serene surroundings.

The island is set in a splendid bay and it has captured the hearts of umpteen travellers. So, if you are planning a trip to Europe, don’t forget to include this miraculous site in your travel itinerary.

Enjoyed this article? Also, check out “Neuschwanstein Castle: The Story Behind the Iconic Bavarian Castle That Inspired the Disney Castle“.