A man by the name of Mehran Karimi Nasseri, remained an accidental resident of Terminal 1 at the Charles De Gaulle International Airport between August 26, 1988 to July 2006. Nasseri’s actual intention was to head out to the United Kingdom. However, a sad mix of strange refugee laws, and the absence of documentation, left the Iranian displaced at an airport terminal for a very long time. Although Nasseri claimed to be Iranian, he also claimed that he had been exiled from Iran, having lost his Iranian citizenship over a difference in political views. It is because of this claim that he had asked for political asylum from Iran.

It is difficult to understand the advent of his story because Nasseri himself asserted different versions through time. What is undeniably obvious, however, is that for around 18 years, despite having his own assets close by, Mehran Karimi Nasseri lived in the terminal of the Paris airport.

18 years at the Parisian airport terminal

There was nothing special about Mehran Karimi Nasseri’s life before his accidental stay at the Parisian Airport.  Born to a middle-class family in 1943 Iran, he had a truly average youth. At the age of 30, he travelled to the United Kingdom to complete his studies at the University of Bradford, which was roughly a 3-year stay.

Nasseri’s mother revealed to him that she was actually not his biological mother and that his biological mother was a Scottish Nurse who had an illicit affair with his father. This made him believe that he was actually a citizen of the United Kingdom and that he might as well apply for British citizenship. While this seemed easy and right out of a movie, it proved to be rather disastrous.

In 1988, Nasseri travelled to London en route from Paris. It is at this point, that Nasseri’s story gets dubious. He claimed that his required documents were in a briefcase that had been stolen when he was on a train in Paris. Consequently, when he reached Heathrow Airport in London, Passport Control deported him back to France due to his lack of documentation. He did not have a passport or a Visa, and according to the law, he was not permitted to be in the UK. On being deported to France, he encountered more trouble at Charles De Gaulle International Airport.

Read more: Oxford English Dictionary was largely contributed by a sex addict murderer who was held in a lunatic asylum.

Since he did not have any documentation on him, he was not allowed to leave Charles De Gaulle Airport either. With such a strange event occurring, Nasseri and the people around him assumed that his stay would be extended to a few weeks at the most. Little did he know, he would end up spending 18 years of his life in that airport terminal.

He spent the next 18 years making the airport his home and stayed on a red bench that he made his personal spot. He spent his time reading books and newspapers around the various shops at the terminal. He had his luggage tucked beside him all the time and the airport provided him with basic amenities like bathroom, showers and even laundry. He lived by spending his life savings and managed to survive just fine because whatever he needed was at his disposal and always just a step away. 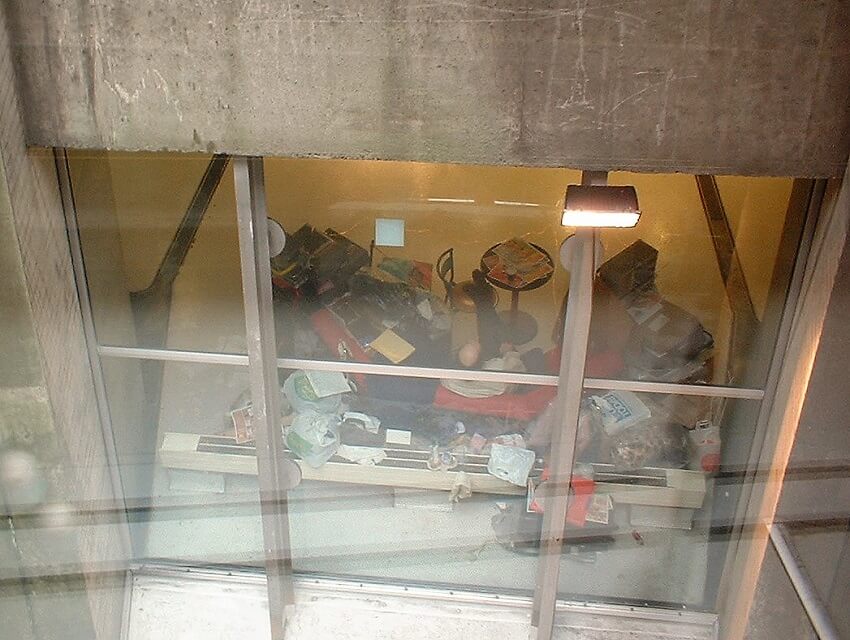 After a few years passed by, a company called Dreamworks Animations made a movie about his tragic story and offered him a payroll of 250,000 dollars. The movie was named “The Terminal” which was directed by Steven Spielberg, and elicited a great response from the audience as well as critics. The movie starred Tom Hanks, Catherine Zeta-Jones, and Stanley Tucci.

While all seemed to work out fine, Belgium claimed to have given Nasseri citizenship 7 years into his stay at the terminal, and France had granted him a residence permit as well. Belgian law states that a refugee who left the country after being accepted could not return, thus Nasseri ended up blacklisted from Belgium. The offers from France and Belgium were refuted by him, claiming that the documents were fake and that he had been granted citizenship by the United Kingdom under the name Sir Alfred Mehran in 1981.

Nasseri’s nationality was listed as Iranian under the new papers he was assigned, which was not necessarily the only reason he refused to accept the helping hand from the other nations. Nasseri insisted and hoped that he could head back to the United Kingdom. Not only did this surprise his lawyer Christian Bourguet; a human rights lawyer, who stayed by his side for 10 years, it also surprised people around the world as to why he did not get up and leave. It would have been practical and the best alternative to staying at an airport. People naturally assumed that he had become delusional and lost his mind. Journalists from all over the world began pouring in and wanted to take interviews of the famed Nasseri, resident of Terminal 1, Charles De Gaulle Airport. Perhaps the theory about Nasseri’s delusions was somewhat true, considering altered versions of the story were told by Nasseri himself. One of the most mind boggling alterations was when he claimed to be Swedish, and also claimed that he had arrived there by a submarine.

His first departure from Charles De Gaulle Airport Terminal 1 in 2006 was not voluntary. He had fallen sick and had to be taken to the hospital because of an unknown ailment. His ailment was never disclosed to the press and he was kept for 6 months for recurring treatments. After his rather long stay at the hospital, he was moved to a hotel near the airport. This was the first time in 18 years that Nasseri had left the airport. Later in 2008, he was granted freedom by the Government of France succeeding which he stayed in the suburbs of Paris, still a homeless, and state-less, man. All the speculation would have been solved if only the thief who stole Nasseri’s passport would have been caught. Or did he truly arrive by a submarine? Perhaps we will never know for sure.

Previous Article
The Unknown Fate of Grand Duchess Anastasia of Russia
Next Article
Yes, we need a global investigation into Covid-19 origin, but not for scoring trivial political points