Insects from Hell: Mecoptera, the Fly with a Scorpion Tail 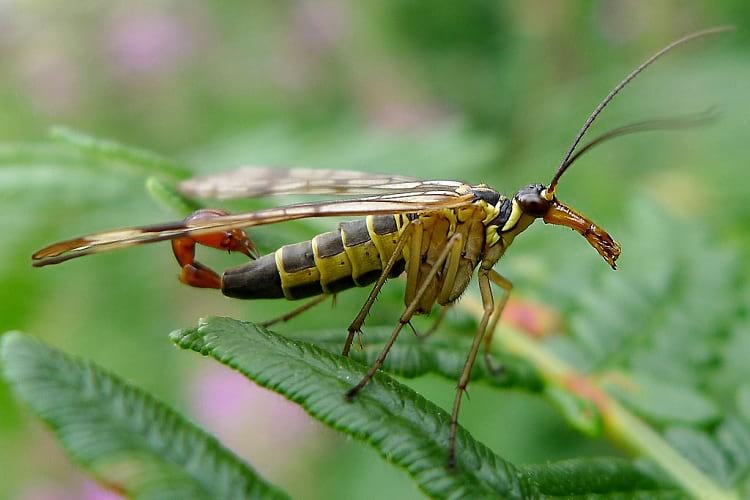 The Mecopterans, more commonly known as scorpionflies, are a very interesting species. Technically insects, they are called Scorpionflies because of the enlarged genitals of the male Panorpidae that resemble the stinger of scorpions. The distinct feature that sets them apart from other insects is due to the presence of a rostrum or a beak-like structure on their face.

Even though Scorpionflies have a tail that looks like a stinger, they do not sting or bite and, are quite harmless. The name Mecoptera is Greek for ‘long wings’. ‘Meco’ is Greek for ‘long’ while ‘ptera’ means ‘wings’. They were named by the eminent American Zoologist and Palaeontologist Alpheus Hall and, American entomologist Jennie Maria Arms in 1891. The name might include ‘fly’ but they do not belong to the family of flies.

The Mecopterans undergo a complete metamorphosis and are considered predecessors of other insects who go through a similar life cycle. The egg of the Mecoptera is said to expand as the embryo grows. This process can either take 5 to 10 days or, several months. The larva then grows in a damp area. It feeds on dead animals or sometimes on smaller insects. They approximately take 32 days to be fully grown, after which the larva digs a hole in the ground to pupate.

In the Pupa stage, it can move about in the shell or cocoon as the body is not attached to the shell. The fully developed adult leaves the shell after 10 to 15 days of completion of the metamorphosis. Though the adults are mainly carnivorous, they are also known to feed on petals, leaves, fruit, nectar, pollen, and in the case of the Snow Scorpionflies, even moss.

There are nearly 300 species of Mecoptera and nine families, though, some families are now extinct. They are commonly found in humid temperate and subtropical areas. The Scorpionflies do not exist in a large enough quantity to have any environmental impact and hence, are not classified under pests. There are three main families or types of Mecopterans.

Being the largest family of Mecoptera, it is also the only family that has the scorpion-like stinger-tail in the males. The insects of this family are dirty-yellowish brown in colour with speckled wings. They feed on dead insects and male Panorpidae attract the females by vibrating their wings and offering a dead insect to the females to feed on. 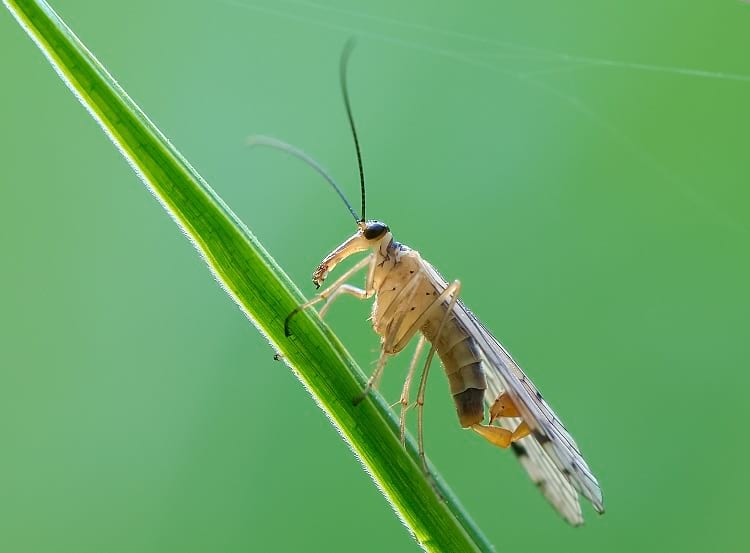 The only family of Mecoptera that is flightless and thrives in cold climates, so much so that they can die from the warmth of the human hand. They can be commonly found in snowy areas, cold mountains, and high altitude regions.

Dark brown or black in colour, they have long antennae but the wings are much smaller, sometimes reduced to bristles. Male Boreidae attract females by waving their antennae or bristles. They jump on the female and stay attached for up to 12 hours, to mate. 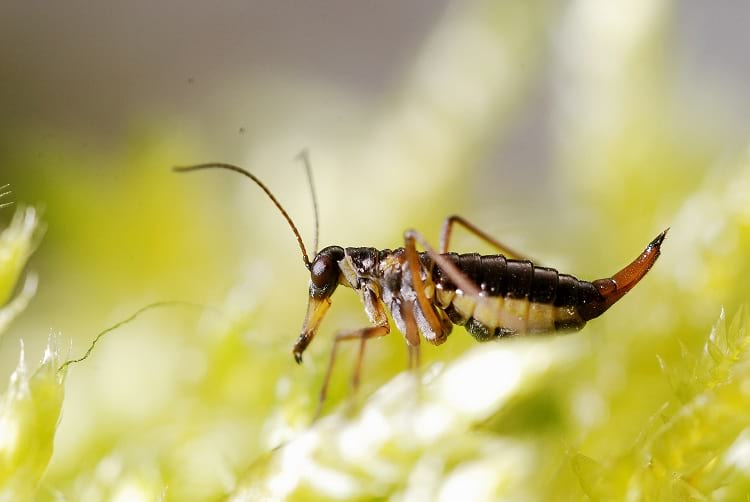 This particular species is so called as the insects are often found hanging from the undersides of leaves to catch prey. They are the only insects to use their clawed hind legs to catch their prey which are smaller insects. They have long wings and long legs. Male Bittacidae attract the females with pheromones and a prey to feast on. They are found on low bushes in moist areas. It is said that before the evolution of bees and other insects that help in pollination, Mecoptera may have had an important role to play in pollinating plants. In the current era, however, Mecopteran adults feed on dead organisms. They are often, the first insects to arrive on a corpse which interestingly, leads to their importance in forensic entomology.

Forensic entomology entails the study of insects or anthropods in a post-mortem. It is a study of the age of the eggs or larvae deposited on the dead body and the time onwards of insect activity. Studying the insects or larvae and their developed stages help in determining the Post Mortem Index (PMI), the change in the decomposition of the body and sometimes also the cause of death.

Forensic entomology is a very important aspect of the criminal investigation and is said to be dated back to 13th century China, the mention of which is in Sung Tzu’s book, ‘The Washing Away of Wrongs‘. Incidentally, Sung Tzu is thought of as the ‘Founding Father of Forensic Science in China’.